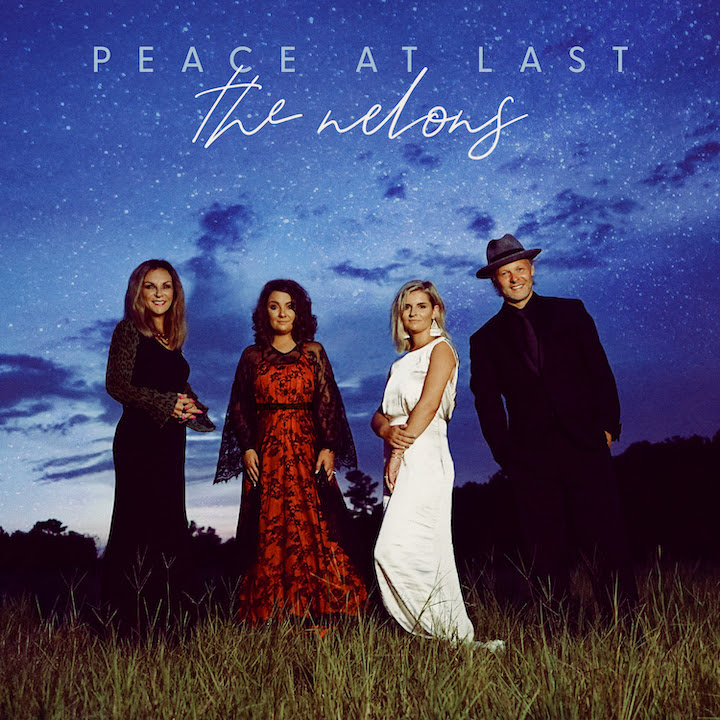 The Nelons find 'Peace At Last'

Produced by Jason Clark and Dove Award-winner Wayne Haun, “Peace At Last” features nine songs co-penned by Clark and six by Haun, along with contributions from acclaimed writers Tony Wood, Joel Lindsey, Kenna West, Michael Boggs and Reba Rambo, and Dony McGuire, among others. The recording reflects the group’s influences across gospel, country and Americana genres, while featuring the signature vocals and family harmonies that have been their trademark for more than three decades.

Highlights of “Peace At Last” include the new single and video, “Jordan,” an infectious barnburner featuring Autumn Nelon Clark on lead. Amber Nelon Kistler’s country-tinged vocals deliver the gentle ballads “Grace Ain’t Fair” and “If God Pulled Back The Curtain,” while Kelly Nelon Clark’s soothing alto is instantly recognizable on the anthemic title-cut, as well as the folksy “Patience of Job.” The cinematic “Still Free,” drawing from the biblical accounts of Daniel in the lion’s den, and Meshach, Shadrach and Abednego in the furnace, exhorts believers to walk in freedom and confidence. And bringing the collection full circle, “Pilgrim” reflects the group’s lauded southern gospel heritage.

“We believe God knew these songs, these stories, the truth they tell and the hope they give, would need to be heard at such a time as this,” Kelly Nelon Clark said. “When I see tears of lonely people, I remember ‘Two Are Better Than One.’ When the news is filled with stories of hate and division, I relisten to ‘Wish We All Could Remember.’ And when I’m gripped with fear and doubt, I imagine ‘If God Pulled Back The Curtain’ to my heavenly home. We can know peace­ – ‘Peace At Last’ – because we know him. I don’t believe we have ever recorded a more important or timely collection of songs.”

“When Tony Wood and I began to write ‘Peace At Last,’ we had no idea what 2020 would hold,” Jason Clark remembered. “For me personally, the year has included months of recuperation from both heart surgery and emergency knee surgery. Not to mention the pandemic and all the other challenges our country and world have had to face. We want these songs to remind listeners – and ourselves – that although times may be a little different, a little harder, we are going to make it! God hasn’t forgotten us, and he will never let us walk in the valley alone. ‘There’s a better day – a’ coming children – there will be peace at last.’ ”

“All of us at Daywind Records are absolutely thrilled to stand in partnership with our friends The Nelons as we enter into a new long-term agreement,” said Dusty Wells, director of artist and label relations. “Kelly, Jason, Amber and Autumn have been treasured members of our Daywind family for years. We believe in The Nelons: their music, their ministry, what they are called to do, and all they represent. We also believe that ‘Peace At Last’ is a career album for them, and will be a favorite for many years to come. This is just the beginning of wonderful new opportunities for The Nelons and Daywind Records.”

Inducted into the Gospel Music Hall of Fame in 2016, The Nelons have been one of Gospel music’s best-loved families for nearly four decades. The group has been nominated for three Grammy Awards; received seven Dove Awards, 14 Singing News Fan Awards, a Silver Angel Award, a People’s Choice Silver Telly Award, and a New York Film Festival Award. The Nelons have recorded more than 35 albums, amassing over 20 Top 5 southern gospel radio singles, including such classics as “We Shall Wear A Robe and Crown,” “Come Morning,” “O For A Thousand Tongues” and “Thanks.” They have frequently been featured on the best-selling Gaither Homecoming recordings and videos, and have performed on the Grand Ole Opry, among other historic venues.

The Nelons continue the rich tradition initiated by family patriarch Rex Nelon, father of Kelly Nelon Clark, who began his legendary career when he joined Gospel Music Hall of Fame members The LeFevres in 1957. The group eventually became known as The Rex Nelon Singers before changing their name to The Nelons in 1982. Through the decades, The Nelons’ polished harmonies and performances, and their anthology of timeless songs, have helped to expand the audience for gospel music around the world.