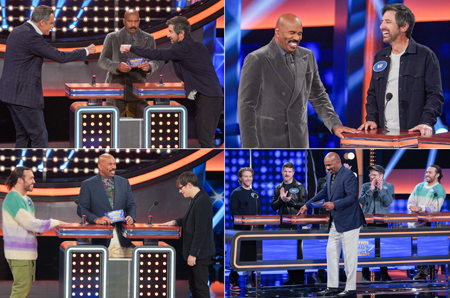 It’s an epic “family” reunion when two comedy greats, Ray Romano and Brad Garrett, test their skills and compete for charity. Then, two famed rock bands, Fall Out Boy and Weezer, go head-to-head on this special new episode of “Celebrity Family Feud,” airing at a special time, Sunday, Sept. 20 (7 p.m. EDT), on ABC. Episodes can also be viewed the next day on demand and on Hulu. The 72nd Emmy Awards will broadcast on ABC at 8 p.m. that night.

Steve Harvey, the popular stand-up comedian, actor, author and Emmy Award winner, returns as host for “Celebrity Family Feud’s” sixth season. Once again, celebrities, along with their families and friends, go head-to-head in a contest to name the most popular responses to survey-type questions posed to 100 people to win money for a charity of their choice.

The celebrity teams who will try to guess what the “survey said” are the following: