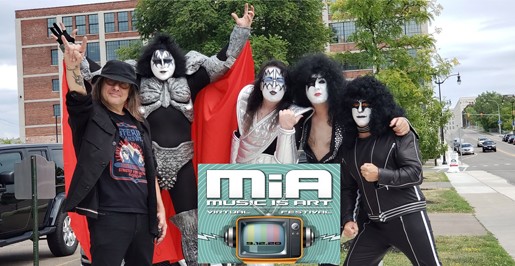 Buffalo's KISS THIS! and the Goo Goo Dolls' Robby Takac are collaborating on a new music video, "Hard Luck Woman," and they’ll premiere it at the 18th Annual Music Is Art Festival between 6 and 7 p.m. ET Saturday, Sept. 12. The performance will be on the "Friends of MIA" channel at musicisart.org.

Because of the pandemic, Takac and his "Music Is Art" team are holding Music Is Art online. The virtual festival runs from 6 p.m. until midnight ET at www.musicisart.org. There will be multiple channels streaming simultaneously, with various content, allowing the viewer to pick and choose what parts of the festival they desire to watch.

The Music is Art organization is a not-for-profit 501(c)(3) founded by Takac in 2003. Music is Art operates in conjunction with its staff, sponsors and volunteers, as well as collaborations with several partner organizations. Every year the festival strives to enrich the Western New York community with access to live music. The hope is to encourage people to find their musical voice, think about how music touches their lives, and, most importantly, think about the fact that music is art.

To commemorate this "first" for MIA, Takac teamed up with crowd favorites KISS THIS!, the East Coast's premiere KISS tribute band, for another "first": a cover of the KISS classic "Hard Luck Woman." KISS THIS! and Takac filmed a video for the song with Promoting Buffalo's Charles Butera. Butera's advertising agency and production company has a decade of video production experience, utilizing state-of-the-art and industry-leading tools. Promoting Buffalo also specializes in graphic design and photography for many local artists and businesses.

KISS THIS! has been a staple of Music Is Art since 2016, as they performed at the festival for the first time that year, opening for the Goo Goo Dolls, in front on thousands of attendees at Delaware Park.

According to KISS THIS! founder John Jeffrey, the band was apprehensive at first, about being part of MIA: "Most of the artists performing at Music Is Art were playing original music, so – being a tribute band – we were uncertain as to how we would be accepted. However, there aren't many bands that do what we do on a visual level. With the fact that music is art, the theatrical presentation of KISS, which we attempt to replicate in our performances, really bridges the gap between the mediums of music and art."

Both KISS's "Starchild" co-founder Paul Stanley and Jeffrey studied the arts, so Jeffrey said, "I feel a kindred spirit," as he oversees everything from the staging, lighting, and the overall look of KISS THIS! "We're really thrilled to have the chance to collaborate with Robby, as he's so talented. He chose the song, 'Hard Luck Woman,' and while staying true to the original, he did it in his style – sounding like himself!"

Jeffrey noted, "We owe everything to KISS. We're grateful how they treat their fans, that they allow tribute bands to continue, and allow us to play their songs, and wear the costumes and the makeup."

He emphasized gratitude to everyone who donated their time to recording the song and to Promoting Buffalo for producing the video. "We're not doing this to make money. All these people donated their time. When this video is shown across the world, and if they want to donate money, it all will go to Music Is Art.'"