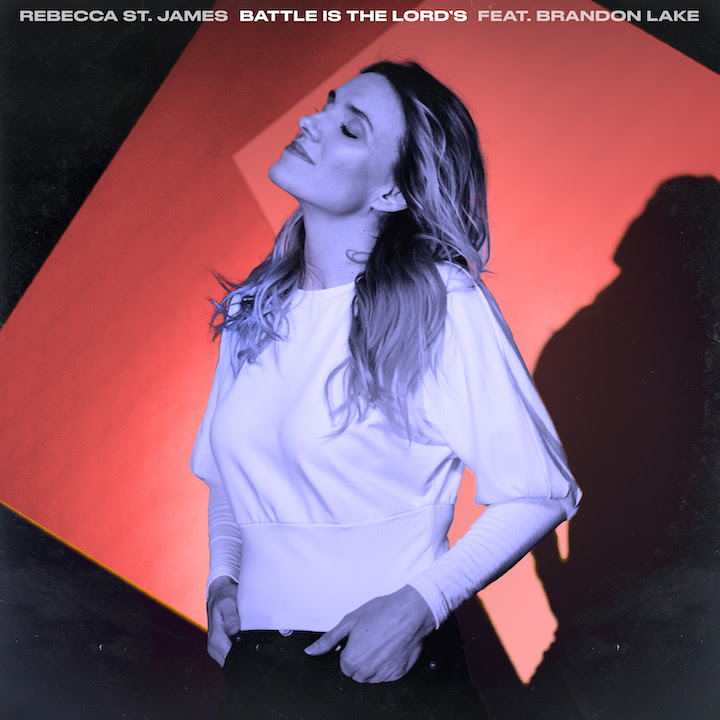 Co-written by St. James with North Point Worship’s Seth Condrey and Heath Balltzglier, “Battle Is The Lord’s” was produced by Seth Mosley (for KING & COUNTRY, Jeremy Camp) and St. James’ longtime collaborator Tedd T. (We Are Messengers, Francesca Battistelli). An offering of worship to the God who protects, the song delivers a timely reminder of who is ultimately in control.

“The message is so relevant to what the world is dealing with right now,” St. James said of “Battle Is The Lord’s.” “The heartbeat is that the church can sing this song, and people can be pointed to the fact that God is in control. I think in this time it’s so easy for all of us to fear, but he’s calling us to a place of deeper trust.”

The lead single from St. James’ forthcoming Heritage Music debut EP, “Battle Is The Lord’s” carries a particularly personal message for the lauded artist. Following a lengthy hiatus from the spotlight, during which time St. James married and gave birth to two children, she was asked by her brothers – Grammy-winning duo for KING & COUNTRY – to perform a brief set at one of their concerts. Although apprehensive to take the stage again, St. James agreed.

“It was an incredibly life-changing moment and probably one of the more instantly transforming moments with God that I’ve ever had,” she shared. “I encountered the Holy Spirit in such a radical way that it made me see music in this non-threatening way again. I realized I missed the connection I have with Jesus when I sing. I missed this aspect of my relationship with him that happens when I’m living in that sweet spot of calling and music.”

“ ‘Battle Is The Lord’s’ has been personally encouraging to me in my journey with this project, even to finish out the work that we’re doing,” St. James added. “There were a lot of old triggers, old fears and old pain associated with music that I had to overcome. This song calls me to trust in God and see that he’s gone before me. It’s his battle to fight, not mine.”

Among the most defining artists in Christian music history, Grammy-winning singer/songwriter, best-selling author, speaker and actress St. James rocketed into the global spotlight following the release of her self-titled ForeFront Records debut in 1994. The Australian native’s modern pop sensibilities and uncompromising lyrics set a benchmark in Christian music, leading a new generation of artistry in the genre.

St. James has earned multiple Dove Awards, nine No. 1 Christian radio singles and two Gold-certified recordings. Her discography includes such iconic albums as “Pray,” “God” and “Transform.” Author of the best-selling titles “Wait For Me” (Thomas Nelson) and “Pure” (Hachette/Faithwords), among others, she also starred in the 2009 film “Sarah’s Choice”; portrayed Mary Magdalene in the groundbreaking rock opera “!Hero”; and voiced "Hope, The Angel" in VeggieTales’ best-selling DVD “The Easter Carol,” in addition to other diverse roles. An award-winning songwriter, St. James co-penned multiple selections on for KING & COUNTRY’s blockbuster 2019 recording, “Burn the Ships,” and she is also the host of Rebecca St. James Friends & Family, a new weekly podcast on marriage and parenting available on K-LOVE Radio’s Accessmore platform.