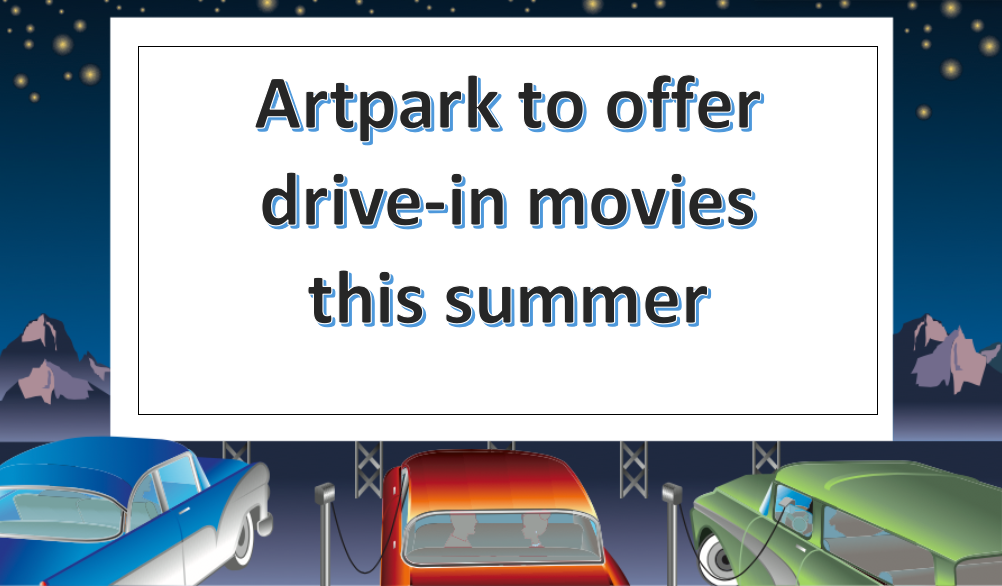 Artpark & Company on Monday announced it will present a drive-in movie series this summer. Movies will be shown at 8 p.m. Tuesdays and 7 p.m. Thursdays.

A press release explained, as a safe alternative to large gatherings, Artpark is planning to present a lineup of drive-in films. Projected on LED screens, 20 films will be shown over the course of the summer on Tuesday and Thursday nights beginning June 16.

In a nod to Artpark’s popular “Tuesdays in the Park” concert series, Tuesday evenings will feature films made for music fans. On these nights, Artpark is planning to show music documentaries, concert films, biopics and other music-related content. The first two weeks of the series will feature films directed by Martin Scorsese: The Band’s legendary farewell concert, “The Last Waltz,” on June 16; and the Rolling Stones concert film, “Shine a Light,” on June 23.

The films shown on Thursdays will appeal to families and general audiences. The most successful movie-musical of all time, “Grease” will be shown on June 18. “School of Rock” will be the feature on June 25, with the Artpark Theatre Academy School of Rock band making a special video appearance prior to the film.

More films will be announced.

Tickets will be $25 per car, which includes $8 admission and a $17 concession credit. Tickets will be sold in advance only. Visit artpark.net or tickets.com to purchase online. Service fees apply for online orders. Call 716-754-4375 to purchase by phone from 10 a.m. to 4 p.m. weekdays, or one hour before movie showtime. Tickets are subject to availability

Artpark will space parked vehicles 6 feet apart. In order to ensure safety of all patrons and employees, Artpark and New York State Parks staff will be monitoring the parking lots to ensure vehicles are spaced properly and that patrons adhere to all safety protocols in place.

All patrons must wear a face mask whenever they are outside their vehicles. Click here for complete safety protocol information.

Gates open one hour prior to showtime.

The drive-in film series at Artpark supported by M&T Bank is sponsored by The Reid Group and Schmitt Sales. It will be held in honor of Niagara County and Erie County frontline workers.

Last week, Artpark & Company announced a whole series of outdoor and family-friendly events that will take place this summer, as well as new safety guidelines put in place to protect patrons.

Of course, there will not be “Tuesdays in the Park” or “Coors Light Concerts” events this summer. Here is the current list of canceled, rescheduled and postponed concerts (as of June 4):

Details on these events have been communicated to ticketholders. If one has tickets to any of these shows and has not yet received an email, contact the venue at [email protected].