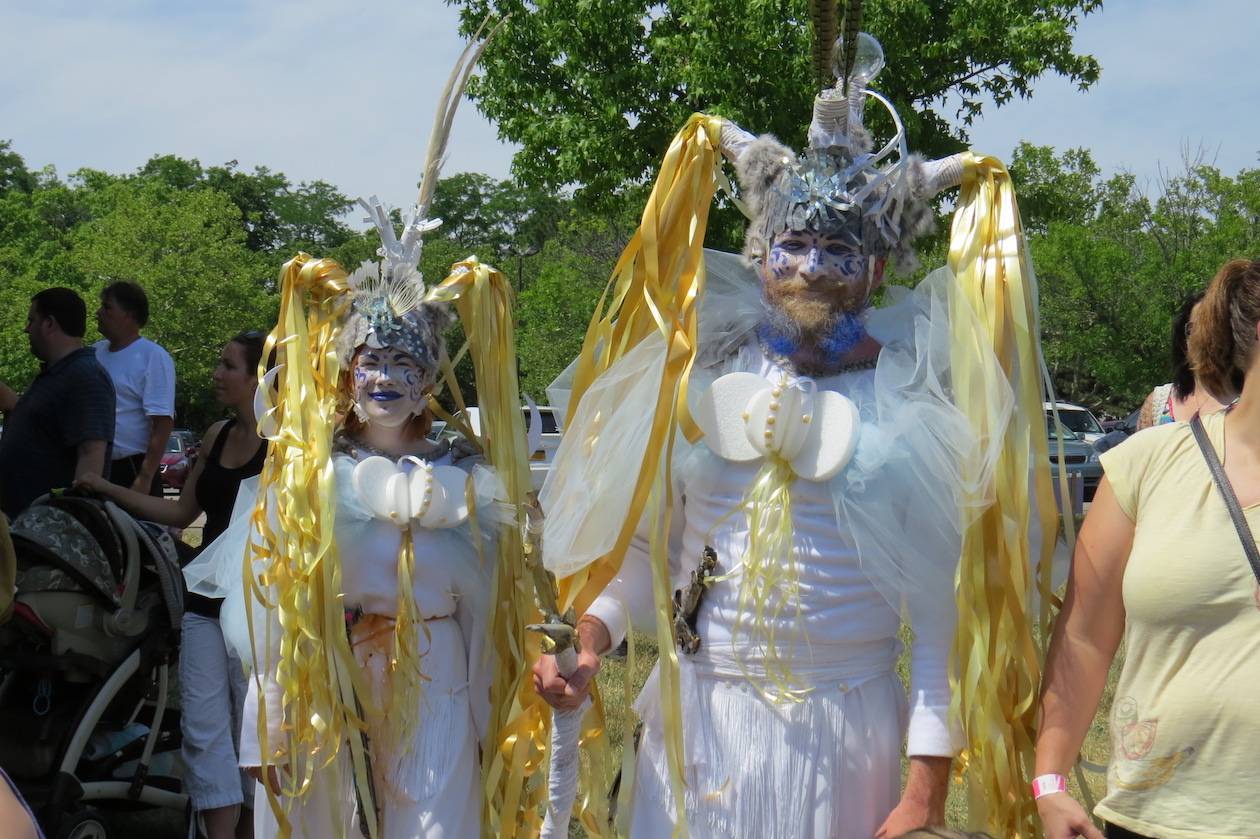 The Fairy House Festival is slated to return to Artpark this summer, but with a different approach. (File photo)

Artpark is churning with activity and fresh initiatives that will allow visitors to interact with the public park in new ways. In the face of multiple concert cancellations and postponements, Artpark has been actively developing new and adapted programs designed to bring the community both relief and inspiration while practicing social distancing and all COVID-19-related precautions to keep visitors safe at all times.

Artpark & Company Executive Director Sonia Kozlova Clark said, “Like everyone else, Artpark and our community have been living through an unprecedented time of major sacrifice and loss. Such a time calls for a special kind of action, strategy and attitude. Right now, all on the Artpark team are focused on handling the ramifications of the unpredictable and managing what is under our control. While large-scale concerts will not be possible this summer, Artpark offers its natural beauty and inspiration to artists and visitors. Looking at this new emerging season, I see an Artpark that serves its community through the healing and uniting power of the arts and nature – an Artpark that serves its mission to nurture artistic talent while providing invaluable service to our audiences through experiences in the park that make us stronger.”

The new season began at Artpark with a juried selection of Rob Lynch & Matt SaGurney (The Solo Roths) as lead artists on Artpark’s parking lot mural project. They will collaborate with the Artpark Bridges community outreach program partners to, together, transform the largest Artpark parking lot (nearest to South Fourth Street) into a large canvas of color that, “gives voice to the underserved members of our community and expresses shared humanity.”

Project development and workshops with organizations including People Inc., Artisan’s Edge and Parkinson’s Community will be conducted throughout the summer, with parking lot painting currently slated to take place over the course of late June through August.

The project is supported by Charles D. and Mary A. Bauer Foundation, Pamela and Joseph Priest, and Jeffrey Williams/Apartments Niagara.

“The Art of Walking” is a new program created by an international collaboration of New York-based theater and visual artist Carin Jean White and Catalan artists Itsaso Iribarren and German de la Riva. Beginning June 27, small walking groups of up to 10 will be led by two performance artists, weaving a moving meditation combining walking, stillness, listening and cheerful interaction.

Artpark & Company said, “Much more than a traditional walking tour, participants will explore the nature, poetry and story of Artpark in an engaging and surprising way. An option for a picnic basket meal will be offered for purchase upon pre-registration.”

Many recent park visitors have been taking in Artpark’s natural beauty and finding relief from stress. Beginning this summer, select trails and landscapes throughout the park will have their own soundtrack.

The Holladay Brothers compose music and map it to a physical space using GPS – a concept referred to as “Location-Aware Music.” Upon downloading a free app, visitors may use their mobile device to dynamically experience the music and hear how it transforms as they traverse through the park.

Hays and Ryan Holladay’s first production, “The National Mall,” is a location-aware album mapped to the eponymous park in Washington, D.C. It was included in the Washington Post’s list of top albums (a first for an app). They’ve since gone on to create similar works for New York’s Central Park, SXSW Interactive in Austin, Texas, and other sites around the world, partnering with groups such as IBM and the U.S. State Department in the process.

The Holladay Brothers are now actively working to develop the site-reactive musical app exclusive to Artpark to be finalized in 2021. Watch for the launch of the test run of the app this summer to be announced soon.

Mac will have an artist residency toward a new work commission with his music director Matt Ray from June 8-12. Taylor and his band will return to Artpark in 2021 for a public performance and a meet-the-artist talk.

A Native American Peace Garden is being imagined to overlook the Niagara River Gorge and serve as a reflection space for healing, celebrating and tranquility. It will “share the deep-rooted beauty of Native American culture and heritage through traditional stories and songs while cultivating Native American plants and medicines.” Artpark is planning to host a variety of teaching sessions for all ages, including drum, dance, storytelling, art and beading within the garden setting – all to the extent safety guidelines permit this summer.

A new Mary E. Garden with an installation titled “Bell Tower” by composer and sound artist William Close will be completed this summer in the park. Audiences enjoyed Close’s performances at Artpark in 2017 and 2018 when he toured with his Earth Harp Collective. The garden installation will be opened to public in early-mid-July and will be a second sound installation by Close after his “Gong Temple” in Artpark’s Percussion Garden.

The project is funded by Mary E. Knotts.

An adapted version of the Strawberry Moon Festival will be held Aug. 1. The event will feature a special program by the Buffalo Philharmonic Orchestra conducted by JoAnn Falletta in collaboration with the Jon Lehrer Dance Company and Kakekalanicks Indigenous Consultancy. The program will celebrate the legacy and indigenous cultures of Niagara Falls on the famed Niagara 1979 site (aka the “Painted Parking Lot”) following social distancing guidelines.

The project is funded by the Regional Economic Development Council/New York State Council on the Arts, M&T Bank and Cullen Foundation. The Seneca-Iroquois Museum will sponsor Native-American themed activities that will take place during the event. More updates on this event will be announced.

Artpark’s annual Fairy House Festival will take place Aug. 15. It will be modified to include contact-free activities and will feature a walk-through tour of artist-created fairy houses, winding through the Artpark woods. Artpark will accept artist submissions to create fairy houses that will be displayed at the festival via a forthcoming RFP. The 10th annual festival is supported by the Cullen Foundation.

Described by The New York Times as “one of the most vital and original ensembles on the American Music scene,” Alarm Will Sound is a 20-member touring ensemble led by Artistic Director Alan Pierson that will present John Luther Adams’ “Ten Thousand Birds” on Aug. 9 as part of Artpark’s “Music in the Woods” series (TBA). The piece is based on the songs of birds that are native to, or migrate through the area in which the piece is performed. It explores the connections between nature and music, a topic that Pulitzer Prize and Grammy Award-winner Luther Adams has pursued over the course of his career – and is a common theme in Artpark’s programming.

This performance is crafted so that the musicians and audience can move around each other, always at a safe distance, listening from changing perspectives while surrounded by the music. Click here for a behind-the-scenes look at the making of “Ten Thousand Birds.”

“One of my greatest hopes for my music is that it may be of use. So, I'm thrilled that Alan and the musicians of Alarm Will Sound have found such a creative use for ‘Ten Thousand Birds.’ At this difficult moment, it's more important than ever for us to remember our connections with the larger-than-human world, and to celebrate the never-ending music of this miraculous planet that is our one and only home,” Luther Adams said of this upcoming performance.

The performance and the “Music in the Woods” series are funded by New York Council on the Arts, Thomas Burrows and HSBC Bank.

Artpark & Company noted that all listed programs are complying with COVID-19 safety guidelines, required by the federal and the New York state authorities. Moreover, “We will ask our visitors to exercise social distancing practice, wear masks, use cleaning stations available throughout the park, and follow Artpark attendance guidance during the programs.”

Check artpark.net or consider joining the Artpark e-list for updates on these and other events.

Earl W. Brydges Artpark State Park and its trails, public art and fishing spots are free and open daily from dawn until dusk.