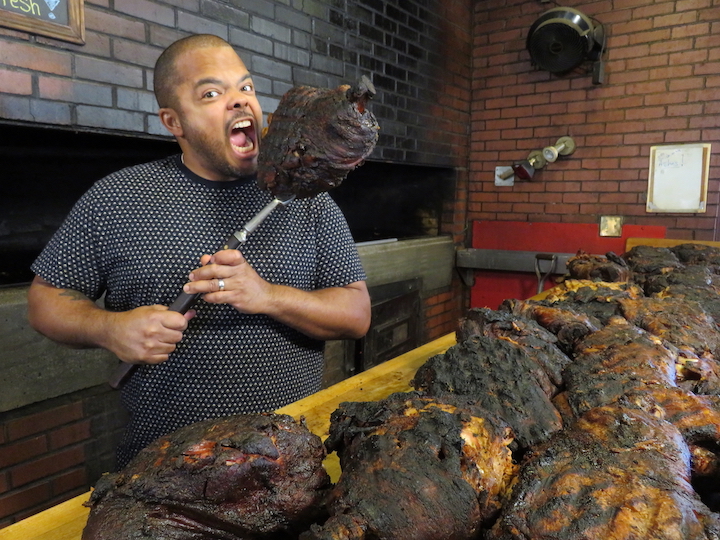 Food Network and Cooking Channel roll out grilling-themed episodes and timely, warm-weather recipes that will have viewers across the country ready for their own Memorial Day celebrations at home.

From Monday, May 18, through Memorial Day, Food Network will feature more than 30 hours of on-air content themed around outdoor cooking at its finest to celebrate the kickoff to grilling season.

Cooking Channel launches a new season of “Man Fire Food” on Wednesday, May 20, celebrating the oh-so perfect marriage of fire and food. From grilling competitions to seasonal bites that will delight including burgers, hot dogs and barbecue every which way, Food Network and Cooking Channel have almost everything viewers need to celebrate the season right.

"Firing up the grill on Memorial Day is a time-honored tradition, and one many will be looking forward to even more so this year as warm weather offers a chance to show off barbecue skills at home," said Courtney White, president of Food Network. "From our very own grilling masters to the ‘Worst Cooks' grilling disasters, Food Network's lineup has something for everyone to get into the spirit of the grilling season!"

Starting on at 10 a.m. Monday, May 18, back-to-back episodes of “The Kitchen” celebrate warm weather cooking and offer recipes perfect for this time of year, including "Summer's Perfect Meal" and "Summer Staycation." At 9 p.m., “Bakeaway Camp with Martha Stewart” features contestants baking and competing in the great outdoors, followed by an all-new “Amy Schumer Learns to Cook” at 10 p.m.

On Tuesday, May 19, a seven-episode marathon of “Chopped” begins at 1 p.m. and serves up episodes featuring seasonal delights such as fried chicken, hot dogs and beach bites, leading into a premiere at 9 p.m. “Supermarket Stakeout” celebrates outdoor cooking in a parking lot with an all-new episode at 10 p.m. titled “Meat Me in the Parking Lot” followed by encore episode “Parking Lot Picnic.”

On Wednesday, May 20, a stack of “The Pioneer Woman” features Ree Drummond whipping up delicious recipes in episodes such as "16-Minute Meals: Summer" and "Perfect Picnic." In the afternoon, a “Guy's Grocery Games” marathon includes a special all-new episode at 9 p.m. titled "Salute the Troops" where Guy honors America's men and women in uniform by inviting four military vets with a culinary second calling to play the “GGG” games. They join forces with the Messlords, a group of “DDD” chefs who travel the world cooking for the troops. Then, grilling takes center stage with back-to-back “GGG” encore episodes "Grill or Be Grilled" and "Guy's Summer Games."

“Beat Bobby Flay” continues the summer fun with an action-filled marathon on Thursday, May 21, at 4 p.m., featuring episodes including "Getting Crabby" and "Red Hot.” Then, at 9 p.m., watch Robert Irvine come to the rescue of a restaurant in Houston in “Restaurant: Impossible.”

On Friday, May 22, join Guy in a special “Diners, Drive-Ins and Dives: Takeout Edition” at 9 p.m. where he is hosting a virtual “Triple-D” family reunion, bringing Flavortown to his own kitchen. Four legendary “Triple D” alum are updating Guy via video-chat to share how they are holding up, and how they have transformed their businesses to keep serving customers.

Kicking off the weekend on Saturday, May 23, it's time to fire up the barbecue starting at 7 a.m. with a “30 Minute Meals” encore, “Brrrooklyn Barbecue,” featuring Rachael Ray sharing a barbecue meal one can make any place, any time. Then at 8 a.m. it's a “Summer Party Helpline” on “The Kitchen,” when the co-hosts share advice and recipes for a summer party. At 10 a.m., it's an all-new episode of “The Pioneer Woman” featuring Ree home sweet home with her kids on the ranch shooting a fun show with lots of hi-jinx and delicious recipes including a divine no-churn ricotta and orange ice cream that's ideal for holidays and every day. Then, at 11 a.m., “The Kitchen” celebrates an American classic – the burger! Sunny Anderson shares her cheese sauce-covered “Sizzling Summer Burger,” and Geoffrey Zakarian cooks up a cheese-stuffed lamb burger. Cooking Channel's Eddie Jackson stops by to make Caribbean jerk sliders, and then Jeff Mauro puts his spin on an Asian-style veggie burger with portobello bacon and Napa slaw. Katie Lee is at the grill to make her french onion burgers, and Geoffrey tops off this burger bash with his “Ultimate Summer PLT Burger” with pancetta. At noon, Trisha Yearwood invites fellow country singer Ashley McBryde over for a day of grilling, music and good company. They make a charred tomato and scallion salad, super-easy grilled potato bites, a flavorful porterhouse with horseradish sauce and, for dessert, raspberry chocolate rice cereal treats. Join Ina Garten at 12:30 p.m. in “Barefoot Contessa: Cook Like a Pro” for a whole episode dedicated to one of Ina's favorite summertime ingredients, tomatoes.

On Sunday, May 24, at 7 a.m., “Giada Entertains” features a "Tuscan Barbecue Party,” followed by “Barbecue in the Big Apple” on “Brunch @ Bobby's” at 7:30 a.m. Nothing says summer like a patio party, so Valerie Bertinelli is hosting a "beginning of summer" get-together with her husband, Tom, and their best friends on an encore episode of “Valerie's Home Cooking” at 8:30 a.m., followed by three episodes of “The Pioneer Woman,” including "16-Minute Summertime" at 10 a.m. On an all-new “Valerie's Home Cooking” at 11:30 a.m., former baseball player Billy Ashley joins Valerie to cook up some treats perfect for this time of year. Enjoy these stadium favorites at home including caramel popcorn and nut mix, microwave sauerkraut with grilled brats and mustard bar, grilled corn on the cob with compound butter and baseball mit krispie treats. Also on Sunday, catch more outdoor entertaining episodes including encores of “Delicious Miss Brown” at noon, “Guy's Ranch Kitchen" at 12:30 p.m., “The Kitchen" at 1 p.m., plus a “Diners, Drive-Ins and Dives” marathon starting at 2 p.m. Then watch out for grilling disasters with a new episode of “Worst Cooks in America: Celebrity Edition” at 9 p.m. The recruits enter boot camp to see that it has been transformed into a nautical oasis, equipped with fish tanks and a live mermaid. Chefs Anne Burrell and Tyler Florence challenge the recruits to dive into the world of seafood by solving a recipe riddle to make ceviche. Then at 10 p.m., Bobby is firing up the grill on an all-new “Beat Bobby Flay” where racecar driving legend Danica Patrick and Eddie Jackson try to wave the checkered flag on Bobby's victory lap during a barbecue-focused episode.

On Memorial Day, Monday, May 25, Food Network rolls out more binge-worthy marathons of favorite shows and stars. Start the day at 10 a.m. with three back-to-back episodes of “The Kitchen.” At 4 p.m., catch Guy in a five-episode marathon of “Guy's Grocery Games." Take the competition outside when a new episode of “Bakeaway Camp with Martha Stewart” premieres at 9 p.m. where the four remaining campers are up bright and early for a breakfast-themed “Counselor's Challenge” introduced by host Jesse Palmer. Using foraged ingredients like lavender, rosemary, lemon, honey and pine nuts, the campers must make an elevated breakfast treat. Camp counselors Carla Hall and Dan Langan and camp director Martha decide which campers persevered and who washed out, moving one step closer to the grand prize. Finish out the long holiday weekend at 10 p.m. with “Amy Schumer Learns to Cook.”

Cooking Channel comes in hot with a new season of “Man Fire Food” premiering Wednesday, May 20 (9 p.m. ET) with Roger Mooking going across the country to celebrate all the inventive ways people are cooking with fire. The premiere episode features nonprofit organization Comfort Farms in Milledgeville, Georgia, where retired veteran Jon Jackson helps fellow vets adjust to civilian life by teaching them how to farm, raise animals and cook.

On Sunday, May 24 (10 p.m. ET), travel the world virtually with “Food Paradise,” where entrees like burgers bursting with chili and a backyard barbecue in one messy mega dish are featured in an episode entitled "Finger Lickin.' "

Starting at noon ET on Memorial Day, celebrate the day with a culinary adventure through America featuring extravagant, can't-be-missed food in a “Man's Greatest Food” encore marathon, including episodes such as "Barbecue," "Grilled" and "Smoked.”