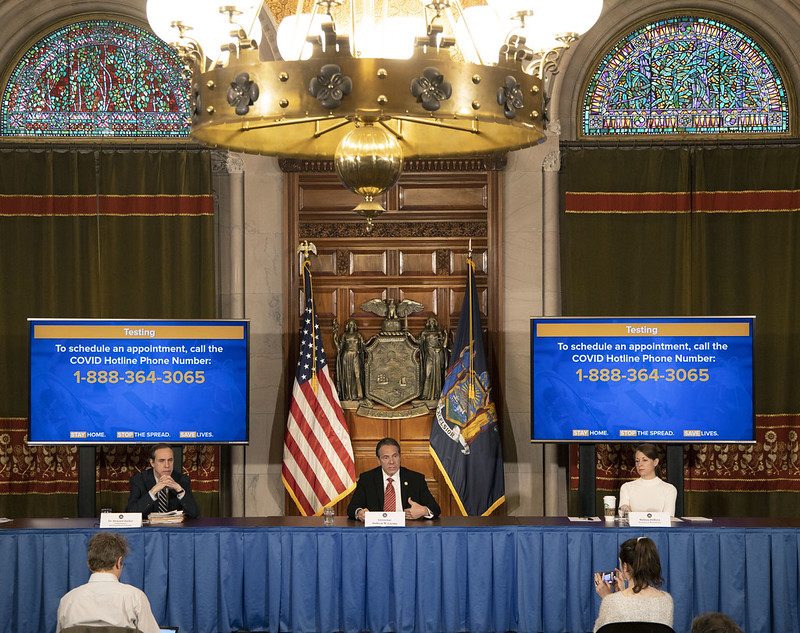 State to open 5 new drive-thru COVID-19 testing facilities, including one in Niagara County

Gov. Andrew M. Cuomo on Monday announced the state is opening five new drive-thru testing facilities in Monroe, Erie, Broome, Niagara and Oneida Counties. On Saturday, the state expanded diagnostic testing criteria to include all first responders, health care workers and essential employees, even if they aren't symptomatic. These individuals will be able to get tested for COVID-19 at these new drive-thru facilities. Residents who would like to be tested at these facilities must make an appointment by calling 888-364-3065 or online at covid19screening.health.ny.gov.

Speaking with Niagara County Legislature Chairwoman Becky Wydysh Monday afternoon on LCTV, Public Health Director Dan Stapleton said, “There will be an exercise to get samples. It will be held in Niagara County – it will be held at NCCC. That’s all being ramped up right now.

“I was just at NCCC just this morning to talk about what they’re doing there. It’s something that the state is doing – they're in charge of that. But we’ve met with them. We've offered ability to partner with them in any way that they need. If they need staff, if they need help with logistics, we’re going to be helping them in any way we can – because we want to make sure this is successful for them. But even more importantly, that our residents who need to get tested, get tested as soon as possible.

“Of course, it’s going to be through people preregistering. You can’t have 1,000, 2,000 cars coming through without having some organization. So, it will be preregistered people.

“I’ve talked to the commander who’s in charge of this thing. They’re going to be ready to roll. This is what they do. They’ve been moving throughout New York state. They did Albany not too long ago. They had 18 days in a row of testing – of sampling; and we expect that they’ll be doing plenty of sampling to make sure people … get the testing as soon as possible.

“And we’re willing to partner with them any way we can.”

Wydysh said, “We’re a heavy tourist area. We have border crossings to Canada. … So, not surprising to me. … These are folks who could’ve been in contact with the virus several weeks ago, before we were kind of getting into lockdown mode.”

Stapleton said, “One of the hopes of antibody testing is it also identifies people who might be able to eventually donate their plasma, to help people who are critically ill.”

Cuomo announced the state is expanding its antibody testing survey starting today to further determine the spread of infections among frontline workers and first responders. The state is testing 1,000 New York City Fire Department officers and 1,000 New York City Police Department officers from across all five boroughs, and this week will test 3,000 health care workers and 1,000 transit workers for antibodies.

Cuomo said, “On testing, this has been a big topic, increasing testing. It's been a scramble for all the states. We're doing well on it. The testing tells you where we are and whether the infection rate is going up or going down. We've now tested 7,500 people statewide, so that's a very significant number and it gives us a snapshot of where we are.”

“Know what you are doing before you do it. Those are words to live by. I don't know who said it, but it is a true axiom. We want to un-‘PAUSE.’ May 15 is when the ‘PAUSE’ regulations expire statewide. I will extend them in many parts of the state. But in some parts of the state, some regions, you could make the case that we should un-‘PAUSE’ on May 15.

Wydysh said, “The governor has been talking quite a bit about a regional approach to reopening, and what would be involved in that scenario. He talked quite a bit more today about what would need to be in place for us to be able to reopen, for a specific region, which, of course that would be different from area to area based on your rates of positive cases, hospitalizations, how you can reopen, whether you can do that safely and effectively, and what should reopen first, in steps.”

She cautioned, “It creates just as many questions as answers, to me. For example, what will the level of testing be, and the tracing need to be, to reach that ability to reopen? We’ve seen how long it can take to get testing ramped up here. We are finally now seeing that drive-thru facility today. We’re receiving more tests through our county health department. Those are all good things. But tracing on a scale the governor talks about has never been done at that level.

“So, certainly, looking forward to having more testing, getting more accurate numbers here, as we look at reopening.

“While on May 15, when the ‘On PAUSE’ order is set to expire, we certainly hope to see some measure of reopening. The governor talks about potentially things like construction and manufacturing that can be done more safely to start with. But there’s clearly a lot of issues that the governor wants to flush out, first, about how those things will be handled.”

Wydysh explained, “I am on conference calls every night with officials from across New York state, all of the other county officials. I speak regularly with our town, city and village officials, as well, so that we can discuss these topics and try and get a plan together, as well, as we’re hearing more information from the governor about how we’re able to reopen things, what we can reopen, and when.”

•Amid a large surge in demand at food banks across the state, the governor announced the state is providing $25 million from the state's special public health emergency fund for food banks and providers most impacted by COVID-19. The state is also asking any philanthropies that would like to help the state's food banks to contact Fran Barrett, director of nonprofits, at [email protected].

•The governor announced the launch of the “Nourish New York” initiative to purchase food and products from Upstate farms and direct it to food banks across the state. The state will also be partnering with the state's dairy producers – Chobani, Dairy Farmers of America, Upstate Niagara, Cabot Cheese and others – to process excess milk into products such as yogurt, cheese, sour cream and cream cheese, which will be distributed to food banks and those in need.

The “Nourish New York” Initiative will be led by Barrett and:

Mike Hein, commissioner of the Office of Temporary and Disability Assistance

"If you look back in history, sometimes it takes a crisis to wake people up, and when it comes to reopening the state we have to use this moment to reimagine a new New York and be smart and grow from this experience," Cuomo said. "The ‘NYS on PAUSE’ regulations are set to expire statewide on May 15 and some regions may be ready to begin reopening at that time, but we have to be smart about it and make sure each industry and business is putting the necessary precautions in place so the infection rate doesn't go back up. Antibody and diagnostic testing will be a key component of our phased reopening, because it tells us the people who were infected and have now resolved, as well as the overall infection rate across the state."