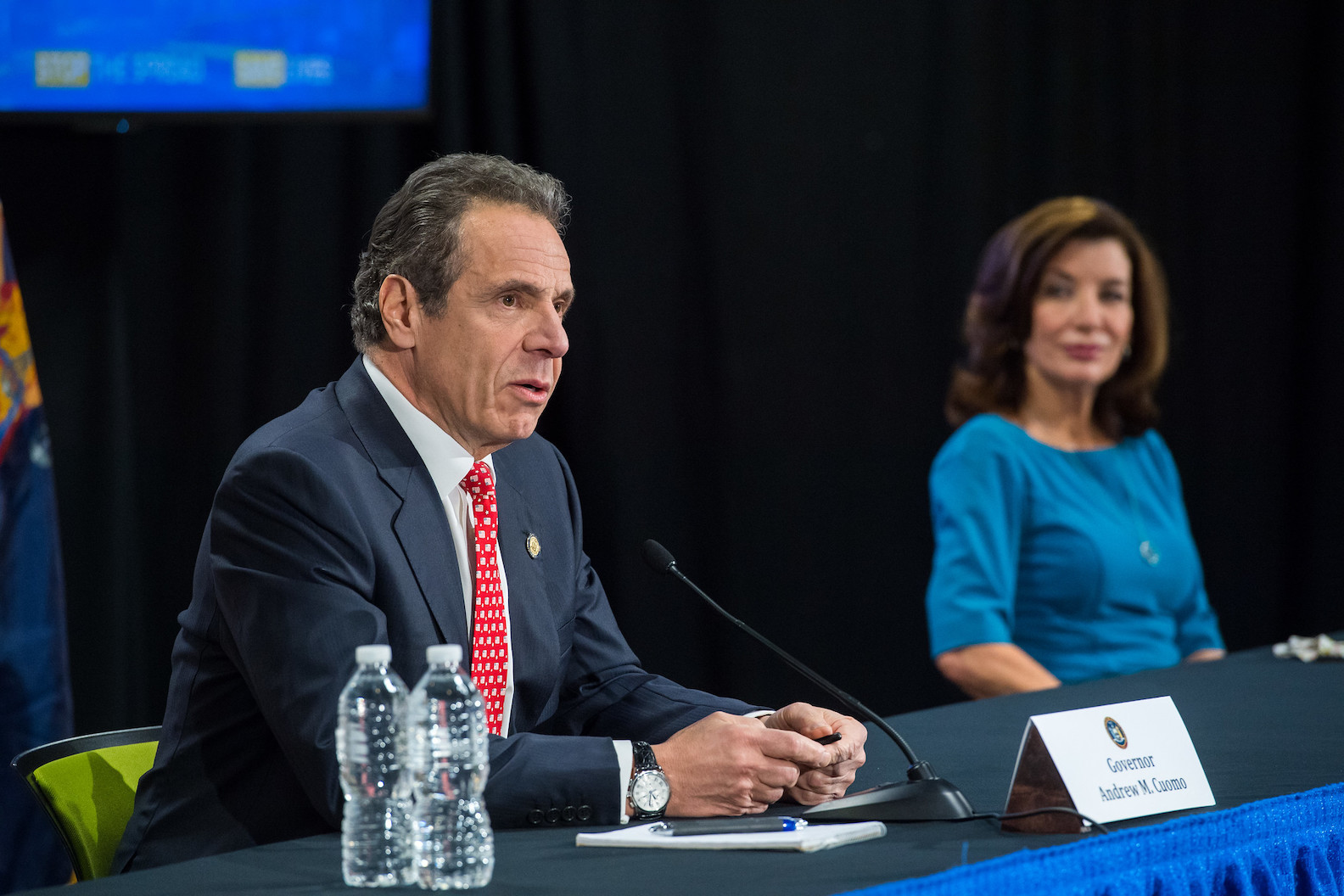 Gov. Andrew Cuomo was joined by Lt. Gov. Kathy Hochul as he delivered his daily press briefing while in Buffalo on Tuesday. (Photo by Darren McGee/Office of Gov. Andrew M. Cuomo)

Lt. Gov. Kathy Hochul has been tasked with spearheading when and how Western New York will come out of its “New York on PAUSE” restrictions.

At a press conference Tuesday morning at Roswell Park Comprehensive Cancer Institute in Buffalo, Gov. Andrew M. Cuomo announced the state will take a regional approach to reopening and will make decisions on which counties and regions to open, and when to open them, based on the facts and data specific to that area.

Cuomo said, “We're going to make reopening decisions on a regional basis. Based on that region's facts and circumstances about the COVID virus. In other words, just like some states will reopen before other states because they have a different circumstance when it comes to COVID and their status with COVID, it's also true across the state. North Country has a totally different situation than New York City. Central New York has a different situation. We operate as one state, but we also have to understand variations. And you do want to get this economy open as soon as possible. And if a situation is radically different than one part of the state than another part of the state, take that into consideration. And that's what we're going to be doing.”

“I believe that it's the hard times in life that actually make you better and make you who you are. If you're intelligent enough to learn from them and to get the message from them. And that's what we have to do here. We have to do it individually; we have to do it collectively. What did we learn about ourselves, about the world, about the country, from this period that we're in? …

“World War I, World War II, the Great Depression, some of the most tragic situations actually forge the character and the resolve of this nation. New York state the same thing. And we have to be smart enough to do the same thing here – and we will, because we're New York tough. But not just tough. It's easy to be tough. It's hard to be smart and disciplined, planned and unified and loving. That's what's harder than being tough, but we're all of the above.”

In her Tuesday afternoon update on LCTV, Niagara County Legislature Chairwoman Becky Wydysh said, “The governor spoke quite a bit today about Western New York, of course because he was in our area, and he feels looking at his numbers and statistics that we are on a plateau of our cases; where downstate they have seen now the downward trend, they feel they're coming down the other side of the curve.

“We are not there quite yet. Again, they feel that we are possibly on our plateau, and we continue to watch our daily numbers, to be sure of that.”

She added, “Once you've hit that flat point, there is always the risk that you could trend back upwards again, instead of going downward, which is what we're looking for and hoping for, and we need to avoid that. So again, just another reminder that those ‘New York on PAUSE’ guidelines are still in effect, and we need to keep following them to see the trend continue that we're on at this point.”

New York State Sen. Rob Ortt is calling on Cuomo to reexamine what businesses should be deemed essential during the current coronavirus pandemic.

Last month, the federal government issued its guidelines for what it deemed as an essential business, which includes businesses that the state of New York has not deemed as essential. Ortt said businesses such as gun stores, outdoorsman activities and landscaping services should be considered.

“While it’s premature and unwise to open all businesses to pre-coronavirus levels and functioning, it’s foolish for the state to operate beyond critical guidelines deemed essential by the federal government,” Ortt said “This is a straight-forward step that balances public health and economic concerns as we effectively plan for reopening our state’s devastated economy. It is irresponsible to be dismissive of the public health threat this virus poses as well as the economic threat that this virus has created.”

Ortt’s team said that, by reviewing the businesses that have been deemed essential by federal guidelines and aligning this with what has been implemented in New York, the state will be able to allow businesses to begin operation again carefully.

“We want businesses that are able to operate to do so while still observing safe social distancing practices,” Ortt said. “We must begin to discuss a regional approach and take into account the differentiation in potential infection rates between Western New York and New York City’s unique situation. By implementing federal guidelines and adapting New York’s guidelines, we will be able to safely allow some Western New York residents to return to work.”

His team said this approach will also allow local government officials to coordinate with state and federal officials to adopt policies that work for each localities’ unique situation.

New York State Sen. Chris Jacobs is calling on Hochul to include the active participation of the Western New York business community in developing the strategy and plan for reopening the region’s economy.

“I believe it is imperative that your Western New York re-opening efforts include representation from actual private sector business owners directly impacted by the current shut down,” Jacobs wrote in a letter to Hochul.

The Senator went on to say later in the letter, “Our people and our businesses are hurting, and it is my belief that it is time to start re-opening our economy.”

Jacobs said he believes the greater value is in a regional approach to reopening the state for business, versus a one-size-fits-all approach. He also said Cuomo’s statements today worry him that there would be too much reliance on elected officials to dictate the process.

“Small businesses, industries like manufacturing and agriculture, and chambers of commerce must have input into developing the reopening strategy and how it should be implemented,” Jacobs said. “The people who operate these businesses and the stakeholders that support their industries know what they need to get moving again, and what they can successfully adapt to. They must have a role in this process if we are going to effectively accelerate our economic recovery.”