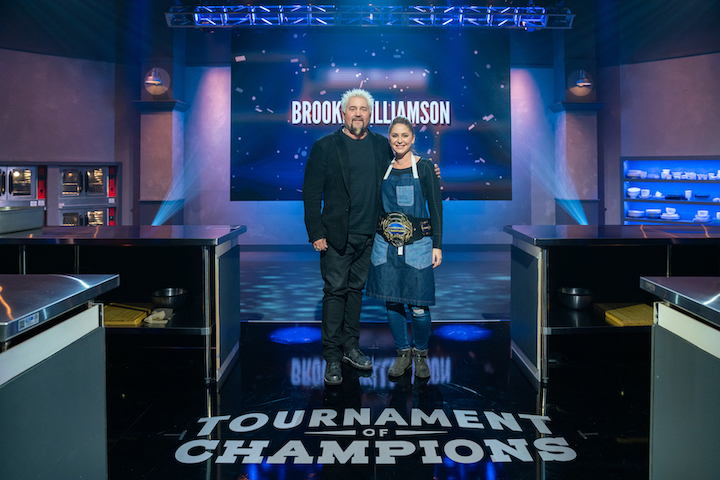 After weeks of shocking upsets and incredible victories on “Tournament of Champions,” Brooke Williamson won the final round of the difficult and unpredictable culinary competition earlier this week.

Host and executive producer Guy Fieri put the culinary skills of 16 of the nation's most celebrated chefs to the test in a single-elimination, East Coast vs. West Coast bracket-style competition, where a randomizer machine determined the protein, produce, equipment, cooking style, and time for each round. Adding to the intensity of not knowing who the chefs would face in each round, or what cooking challenges they must tackle, their dishes were judged by culinary experts in blind tastings as the competitors watched the reactions backstage.

"Viewers were hooked by the intensity of the sudden-death, bracket-style format of ‘Tournament of Champions’ full of unexpected twists and turns throughout each round of the competition," Food Network President Courtney White said.

The pressure was on and emotions were high in Wednesday night's final cooking battle, as Brooke, who entered the tournament as seventh seed on the West Coast, faced-off against East Coast chef Amanda Freitag. The randomizer dictated the finale challenge where the two had to use a whole duck as the protein, kohlrabi as the produce, a turning slicer as a piece of cooking equipment, utilizing each one in a dish for breakfast, one for lunch, and one for dinner in only 60 minutes.

After racing around the kitchen to prepare their dishes for the judges, Amanda and Brooke watched the deliberation backstage. With a surprising one point difference, Brooke's dishes – duck egg in a hole for breakfast, fried duck crackling, kohlrabi, apple and endive salad with mustard buttermilk dressing for lunch, and duck breast with charred persimmon sauce with pickled kohlrabi and fried kohlrabi greens – won the “Tournament of Champions” and earned bragging rights, a championship belt and a brand-new RAM 1500 limited truck.

"Chefs are competitive by nature and, when you throw them into the fire of blind judging, the battles are intense, unpredictable and true feats of culinary excellence," Guy said. "In the inaugural ‘Tournament of Champions,’ Brooke Williamson proved that she alone is the fiercest competitor on the culinary battlefield."

Brooke, a former “Top Chef” champion, said, "Some people thrive in a competitive environment, and I may even dare to say I'm one of those people. ‘Tournament of Champions; was a very different dynamic from any show I've done in the past; it was very fast-paced, cut-and-dry, one-on-one bracket battle format. Cooking and competing against close peers and friends – all of whom I have tremendous respect for – made for an incredibly rewarding competition, that I'm so honored I was able to be a part of."

Heading into the finale, “Tournament of Champions” had been seen by nearly 9 million viewers and with an average rating of 0.8 P25-54, 0.9 W25-54, with the most recent episode posting a 1.0 P25-54 rating and a 1.2 W25-54 rating, ranking No. 3 among ad-supported cable within its timeslot for both P25-54 and W25-54, as well as No. 2 among millennials P25-34.* The series was also a hit across social platforms with original content that saw a total reach of more than 50M during the season, with last week's episode ranking as the No. 3 live primetime premiere.**