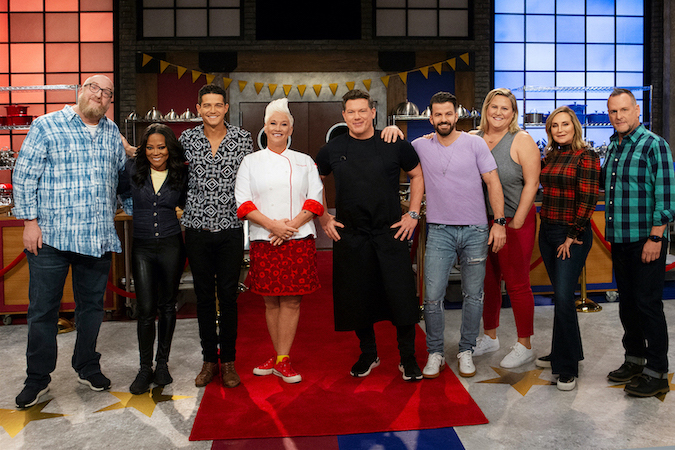 World-renowned chefs Anne Burrell and Tyler Florence are back to whip a fresh cast of all-star cooking nightmares into culinary shape in a brand-new season of “Worst Cooks in America: Celebrity Edition,” premiering Sunday, May 10 (9 p.m. ET/PT) on Food Network.

In the six-episode season, Anne and Tyler each lead a team of celebrity recruits through a series of intense cooking challenges to transform their kitchen skills. Only the most-improved star left standing at the finale wins $25,000 for the charity of their choice and bragging rights for their team mentor. From a seafood challenge with live fish tanks to a rowdy dessert scramble game, anything can and does happen in “Worst Cooks” boot camp.

" ‘Worst Cooks: Celebrity Edition’ is fun, unpredictable and a great show for the whole family to enjoy together," said Courtney White, president of Food Network. "Watching these celebs transform from hilariously horrible in the kitchen to quality cooks is an enjoyable and inspirational ride."

In the season premiere, Anne and Tyler welcome seven of the worst celebrity cooks in the country to boot camp. Before the chefs pick their teams, they want to see what skills or lack thereof they are working with. For the baseline challenge, the recruits are tasked with making their go-to dinner party dish. Once the recruits are split into teams, Anne and Tyler show them how to cure those dinner party dish-asters, with a delicious boozy brunch, which they must replicate in order to stay in boot camp.

In the finale on Sunday, June 14, the two most-improved recruits must create a three-course restaurant quality meal for guest judges Dan Churchill, Jeff Mauro and Grace Mitchell. After a blind tasting, the judges determine who is awarded $25,000 for their charity and bragging rights for their team leader.

Fans can meet the new celebrity recruits, relive the top moments from boot camp and get an exclusive, extended look at Anne and Tyler's cooking demos at FoodNetwork.com. Viewers can also share their biggest kitchen disaster and follow the competition on social using #WorstCooks.