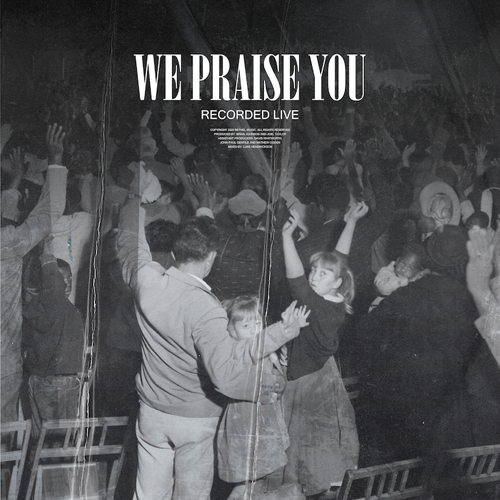 Bethel Music declares 'We Praise You'

The second single from Bethel Music’s forthcoming “God of Revival” compilation, “We Praise You” – recorded live at Bethel Church in Redding, California – was produced by Johnson and Joel Taylor.

The press release explained, “A celebratory anthem raised amidst times of panic and uncertainty around the world, the song boldly proclaims the potency – and peace – of surrender through praise: ‘We’ll see You break down every wall/we’ll watch the giants fall/fear cannot survive when we praise You.’ ”

“Not only has it been cool to be part of a song that’s so declarative and full of faith, but it’s been special for me personally because I got to write it with my heroes,” Lake said of the new single. “Praise isn’t just something we give as a gift to God, it’s something that can make things shift – it’s a weapon. Even if it doesn’t change the situation, praise can shift my perspective. It can take my eyes off the storm and put them on Christ.”

Bethel Music’s “We Praise You” arrives on the heels of last month’s “God of Revival.” A prophetic anthem of praise and prayer featuring Bethel Music co-founders Brian & Jenn Johnson, “God of Revival” pleads for a new awakening, an outpouring of his spirit on families, cities and nations.

This spring, audiences around the country can experience Bethel Music on "The Roadshow 2020" Tour, presented by Compassion LIVE. The 16-city outing kicked-off this week and also features Matt Maher, Martin Smith of Delirious?, Unspoken, Apollo LTD, Elle Limebear and Peabod. Click here for a complete list of cities and dates.

To date, Bethel Music has released 14 corporate worship albums, seven of which reached Billboard’s top Christian albums chart, each carrying a unique expression of worship to inspire and unite the global church. Along with the label’s 11 Dove Awards, “This is Amazing Grace” was named ASCAP's Christian Music Song of the Year in 2015, with Cory Asbury's "Reckless Love" earning the same honor in 2019. “Reckless Love” was also nominated for a 2019 Grammy and was Billboard’s fourth-most popular Christian song of the decade.