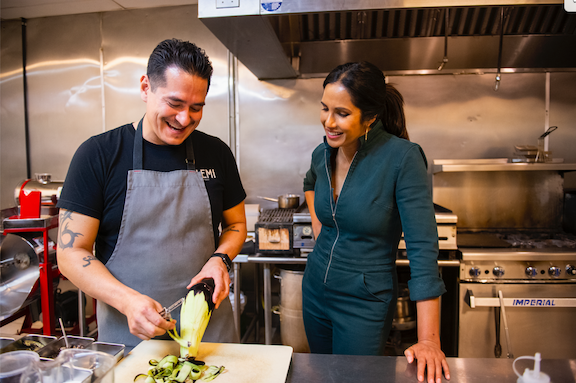 "Taste The Nation with Padma Lakshmi" (Image courtesy of Hulu)

Hulu on Friday added to its slate of original food originals with unscripted series “Taste The Nation with Padma Lakshmi,” which will debut all 10 episodes on Friday, June 19. The series, which is executive produced by Lakshmi along with Part2 Pictures’ David Shadrack Smith and Sarina Roma, will be a featured title in Hulu’s upcoming food-focused content experience, “Hulu Kitchen.”

In “Taste the Nation,” award-winning cookbook author, host and Executive Producer Lakshmi takes audiences on a journey across America, exploring the rich and diverse food culture of various immigrant groups, seeking out the people who have so heavily shaped what American food is today. From indigenous communities to recent immigrant arrivals, “Lakshmi breaks bread with Americans across the nation to uncover the roots and relationship between our food, our humanity, and our history – ultimately revealing stories that challenge notions of identity, belonging, and what it means to be American,” a press release revealed.

“Taste the Nation” joins Hulu’s growing slate of food originals, which includes upcoming series from David Chang and Chrissy Teigen produced by Vox Studios, among others. As part of “Hulu Kitchen,” these originals will live alongside hundreds of hours of popular food series such as “Chopped,” “Top Chef” and “MasterChef” – accessible on-demand, any time, on across hundreds of devices.