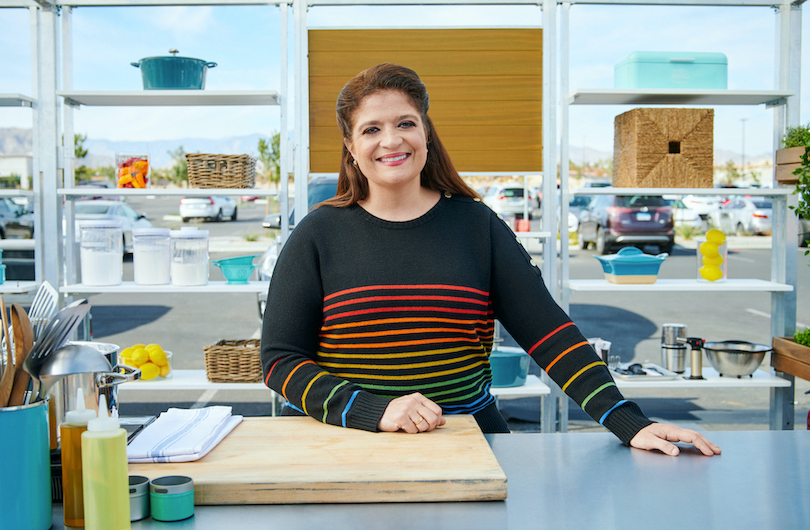 Food Network's hit series “Supermarket Stakeout,” where the action begins when unsuspecting customers leave the store aisles – and luck, negotiation and cooking skills are the ingredients to win – returns for a second season of fast-paced pop-up culinary battles on Tuesday, March 17 (10 p.m. ET/PT).

Hosted by Iron Chef and “Chopped” judge Alex Guarnaschelli and shot on-location at supermarkets around the country, each episode features four talented chefs who must ambush shoppers as they exit the store and blindly bid on their grocery bags without knowing what's inside. Over three themed rounds with a budget of only $500 and pop-up kitchen setups, the chefs can only cook with the items they are able to negotiate out of the customer's carts with persuasion and a little cold hard cash.

A rotating panel of judges, which this season includes Scott Conant, Giada De Laurentiis, Bobby Flay and Molly Yeh, ultimately determine each week which competitor made the most successful menu and is awarded enough cash for a year's worth of groceries.

" ‘Supermarket Stakeout’ quickly become a must-watch for our viewers in its first season and we are so excited to deliver another season this soon," said Courtney White, Food Network president. "You never really know what you are going to get in each episode – personality, luck and cooking all play a part, so each week's battle is filled with edge-of-your-seat unexpected results."

Set in pop-up kitchens outside local supermarkets, each episode begins with Alex giving the four chef contestants $500 apiece – their whole budget to buy ingredients for the three-round cooking competition. In round one, the chefs can purchase ingredients only by blindly ambushing customers outside the store and negotiating for their grocery bags without knowing the contents. In round two, competitors can only purchase groceries from a single shopper, but may look through the bags before negotiating the price. In the final round, competitors may purchase five ingredients total, but can approach as many shoppers as it takes to get what they need. After each themed cooking round, the least successful chef is eliminated, leaving two competitors going head-to-head in the final round, vying for a cash prize.

Viewers can learn more about Alex and head into the store with her for exclusive shopping tips and tricks at FoodNetwork.com/SupermarketStakeout. Follow #SupermarketStakeout on social channels to watch highlights of the craziest moments.