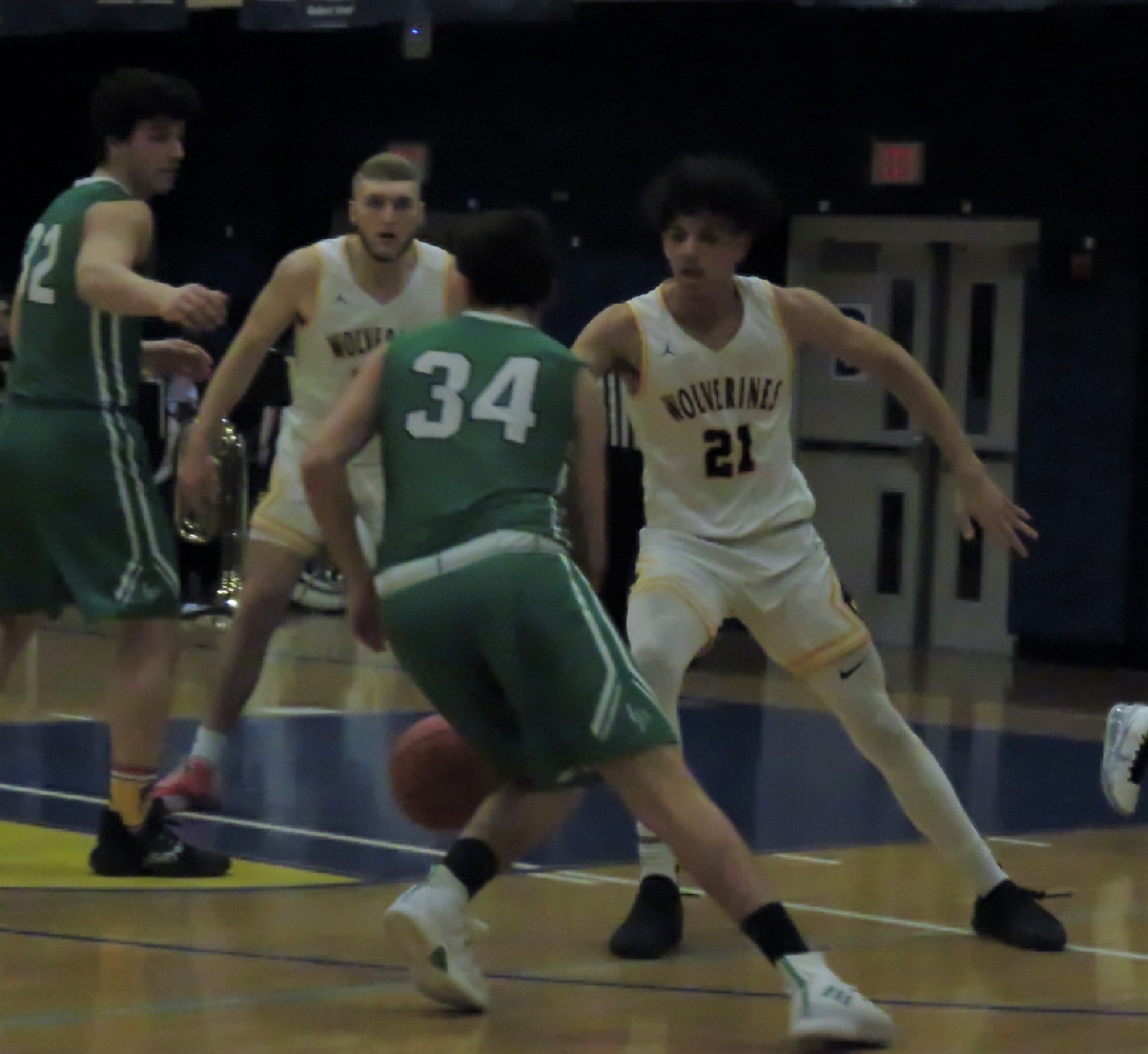 Tuesday night, the Lewiston-Porter Lancers faced the Niagara Falls Wolverines on the hardwood without their star sophomore Roddy Gayle.

Gayle was on the bench for the Lancers’ battle, as he nursed an injury. And while most people counted L-P out in his absence, the Lancers gave the Wolverines everything they had.

Despite the efforts, the Wolverines prevailed, 71-67, behind big nights from Taylor Sanders and Bryce Smith.

The Lancers showed from the get-go it wouldn’t be easy for the Wolverines. Jack Bernstein, Jalen Duff and Mehki Starks got the offense started for the Lancers, which was just the beginning to the trio’s stellar outing.

Lew-Port led 11-9 in the early going, but the Falls ended the first quarter with a 15-4 run. During the run, sophomore Dom McKenzie score all six of his points, and Sanders and Smith added five and four points, respectively. After the first eight minutes, Niagara Falls led, 24-15.

The Lancers, as they did most of the game, kept fighting and kept things close in the second quarter.

Down 26-19, Bernstein made a bucket, then followed with a 3-pointer. Duff then hit a trey and Joe Beatty added a free throw to tie it at 28.

Sanders followed the Lew-Port tie with a trey, a block on the defensive end, then another triple to give Falls a 34-28 lead. After a Starks bucket, Sanders then cashed in another 3-ball.

Down 37-30, though, Duff ended the half with a big 3-pointer to cut the Falls lead to four.

At the break, Sanders had 17 points, including five 3-pointers for the Falls, while Duff had 11 for L-P.

With just four points at halftime, senior Jaemon “Mookie” Turner found his groove in the third quarter. Turner started with a trey and scored three more buckets in the frame for nine points.

Sanders and Smith continued their success, as Sanders nailed two more 3-pointers, while Smith remained a force on the offensive glass, getting second chances for the Wolverines offense.

Despite the success, Lew-Port refused to go away.

Down 48-42, Duff hit a long step-back 2-pointer, then Bernstein followed with a trey to make it a one-point game.

The Falls extended its lead in the fourth quarter to 13 (69-56), as Smith and Turner added four points each, but, once again, the Lancers kept coming.

Sloppy decision making doomed the Wolverines late and the Lancers took advantage to creep closer. Starks made two free throws, Duff made a 3-pointer, then the duo took turns converting tough layups. The 9-0 run cut the Wolverines lead to 69-65.

Smith then added a late bucket for NF, while Starks sunk a jumper for L-P, but time ran out on the Lancers resulting in a 71-67 final.

For the Lancers, the offense was led by Duff, who scored 23 points, including four 3-pointers. Additionally, Starks had 20 and Bernstein netted 15.

A loss is a loss, but Lancers coach Matt Bradshaw, with Gayle out, said he was thrilled by the fight his team showed.

“You can win when you lose, and we definitely won tonight while losing, because so much confidence was built into the other kids tonight,” Bradshaw said. “Nobody gave us a chance. … People didn’t show up because Roddy wasn’t playing and so on and so forth, but let me tell you, we gave that team (a fight). We ran out of time. They’re lucky the clock ran out.”

Bradshaw added that he was proud of his players and their gritty demeanors to still fight despite trailing by 11 to 13 points at times.

“This will just pave the road ahead for us. As long as we continue playing like that, then we get Roddy back, I wouldn’t want to play us,” he remarked.

Offensively, the Lancers run majority of their plays through Gayle. The team didn’t have that liberty Tuesday night, and relied more on Duff, Starks and Bernstein as their scorers, and Bradshaw was happy with their outings.

“To me, this was a coming out game for Mehki. He can play. That’s all I kept telling him. … I thought Bernie was superb tonight. He just worked and worked. We put him on Sanders in the third quarter and I think he scored once, but I know he did a great job,” Bradshaw said.

For the victorious Wolverines, Sanders led the way with 25 points, while Smith posted a double-double with 21 points and over 10 rebounds. Additionally, Turner added 17 points.

Some people expected a bigger win from the Falls with Gayle’s absence, but, nevertheless, a win is a win Sanders, Smith and NF coach Brent Gadacz agreed.

“That’s how it always is. After this game is said and done, they’re going to say they needed Roddy, and if they had Roddy they were going to win. Honestly, it don’t matter if he’s on the floor or not, we’re still going to do what we do – pull out the W,” Sanders said.

Gadacz noted, “They played really well. I think our kids were a little disappointed Roddy didn’t play, because we prepared for it all week, so it was different. And I wasn’t sure if he was going to play all the way up until game time. I heard he was out, but you never know. And Roddy is a great kid, I hope he gets back to playing real soon, because I like watching him play, personally.”

Additionally, Gadacz credited Duff and Starks for the games they played, and moving forward, his Wolverines must play smarter and be patient late in games with a lead to milk some of the clock.

Smith was the “X” factor for Niagara Falls Tuesday night, as he drew praise from Bradshaw and Gadacz for his performance on the boards. The big man said rebounding is a key to his point total.

“It was very big,” Smith said of his advantage on the glass. “A lot of my teammates and a lot of people have seen that sometimes I get looked off a lot. They tell me I gotta get my points from these rebounds, so that’s how I’m going to get my points. I make sure I put myself in a good position to get a rebound and do what I gotta do.”

Bradshaw added, “Bryce was the difference. Sanders has been scoring, but, to me, the Bryce kid is the guy that really saved them tonight.”

Gadacz noted, “He did a great job on the offensive glass, and that has been his strength this year. We’ve been spending a lot of time with him in the post. We ran some stuff to get the ball inside to him and when he got the ball off our offensive sets, I think he has to do a little bit better job of making a quicker decision and making his move and finishing, or starting to look for guys that are moving … and finding them. … Once he gets that, he’s going to be even tougher.”

Additionally, for Sanders, its another game with 25 points, and after a slight struggle with his jumper to start the year, the senior has heated up as the season continues.