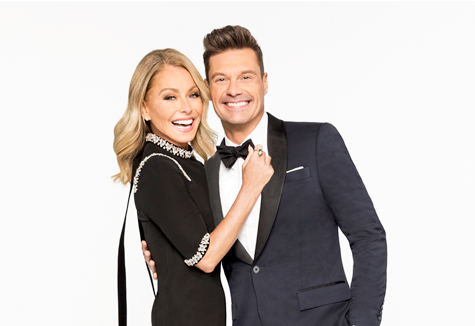 The most highly anticipated of any awards in the entertainment industry, the Oscars ceremony attracts Hollywood’s best and brightest; and the following morning, “Live’s After Oscar Show” wraps up the festivities in fitting style with an hour-long salute to this legendary evening.

Now in its ninth year, “Live’s” telecast originates from the Dolby Theatre at Hollywood & Highland Center, airing live mere hours after the Oscars broadcast concludes on the very same stage. “Live’s After Oscar Show” highlights the best moments from the night before, with exclusive backstage interviews that capture the emotions of the winners minutes after they accept their Oscar statuettes. Kelly and Ryan also showcase the iconic Oscars red carpet, capturing the glamorous looks of Hollywood’s A-list celebrities as they make their way toward the Dolby Theatre.

A highlight of the hour will be a performance by Grammy-nominated pop superstar Kesha. Also joining Kelly and Ryan for an Oscars fashion round-up will be “Queer Eye” star Jonathan Van Ness.

The 92nd Oscars will be held Sunday, Feb. 9, televised live on ABC at 6:30 p.m. EST. “The Oscars” also will be televised live in more than 225 countries and territories worldwide.