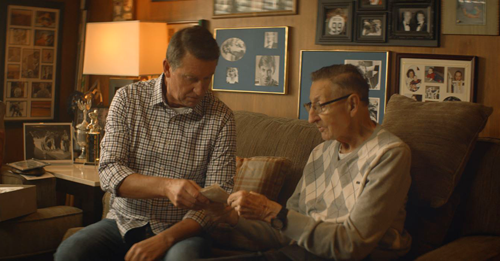 Tim Hortons shares true story about moment that sparked a young Gretzky’s passion for hockey in “The Autograph,” featuring Wayne and his father, Walter, as they relive the moment in their family home

No one could have predicted that a chance meeting in 1968 between a young Wayne Gretzky and hockey legend Tim Horton at a restaurant in Brantford, Ontario, would change the course of Wayne’s life, and Canada’s hockey history, forever.

Wayne’s mother, Phyllis, took him to meet Horton at a local restaurant opening. The meeting ignited Gretzky’s passion for hockey and inspired him not just to become a professional hockey player, but eventually “The Great One.”

“When I was a young boy, I looked up to Tim Horton. He was an icon – one of the best Canadian hockey players of his generation. I would watch him play on TV, and every night I went to bed thinking about being like him and playing hockey on TV,” Gretzky said. “There have been many moments in my career that I will never forget, but the moment I met Tim in that restaurant and he signed that napkin for me, it inspired me to believe that I could become a professional hockey player like him.”

A partnership with Gretzky and Tim Hortons has been more than 50 years in the making and is captured through a moving spot, “The Autograph.” This heartwarming piece tells the true story of how a young Wayne visited a newly opened Tim Hortons to meet his hockey hero – Tim Horton.

Gretzky realized he forgot to bring something to get signed, so a quick-thinking Horton grabbed a napkin and wrote “Wayne, Best Wishes, Tim Horton.” This memorable exchange inspired Gretzky to dream of being a professional hockey player one day.

Walter Gretzky, Wayne’s dad, has kept the autographed napkin for more than 50 years, because it meant so much to his son. Walter, the ultimate hockey dad, is featured in the spot alongside Wayne sharing the napkin.

“To us, the story of Tim Horton and a young Wayne is extraordinary – when I heard it, I knew it was a beautiful and touching story,” says Paloma Azulay, chief marketing officer, Tim Hortons. “The true story about the meeting between a Canadian hockey icon and a young boy who we would one day call ‘The Great One’ was the start of something bigger than great – it was the start of something legendary. We’re so proud to have played a small part in such an important moment in hockey, and Canadian, history. We’re excited to share this story with a generation of Canadians who have been inspired by Wayne.”

Canadians will be able to watch “The Autograph” for the first time on TV during the IIHF Ice Hockey World Junior Championships this month. On Jan. 15, guests can find limited-edition tumblers featuring “The Great One’s” autograph and iconic number 99 at participating Tim Hortons Restaurants across Canada. Tumblers are available at participating restaurants for $17.99 while supplies last.

“The Autograph” was developed by creative agency GUT with Canadian directors Jon and Torey leading the creative vision from behind the camera. To create the spot, the team recreated a 1960s Tim Hortons restaurant, accurately replicating every detail from the sign outside to the napkins used at the time. In preparation for the shoot, it became clear that playing the role of young Gretzky was every young Canadian actor’s dream, As such, more than 68,000 Canadian boys auditioned for the role. 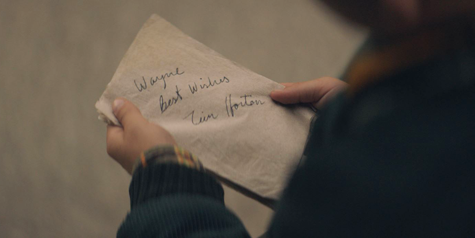