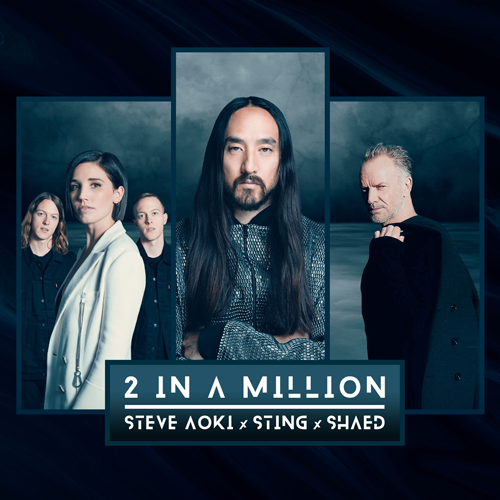 The track begins with Sting as his soothing, unmistakable vocals captivate over Aoki’s slow but steady build, a signature of his pop ballads. The beat then drops introducing the pure vocals of SHAED’s lead Chelsea Lee as she joins pre-chorus with Sting to harmonize “How many people in the world are looking for a love like this tonight/ How many people in LA out there are searching for a sign/ How many people in the crowd and I still wander by your side,” grappling with the search of finding one's soulmate through all of life’s complexity.

The music video mirrors the sentiment of the song and its natural progression of the quest for a soulmate, opening with Sting on an empty stage in the spotlight alone. Thereafter, two contemporary dancers join him on stage in a portrayal relaying how the two are “meant to be.” Next, SHAED is shown in the mezzanine of the same theater, while the video continues to intertwine all three acts: Aoki, SHAED and Sting in separate places within the theater, up until they’re found together on the rooftop overlooking the cityscape.

“I am beyond excited about this collaboration with Sting and SHAED,” Aoki said. “SHAED is a group of incredible talent and Sting is just a legend. I’ve been a fan of his for as long as I can remember, so it’s surreal to have him on one of my songs. What they both brought to the table made for an incredible track, so ready for the world to hear it."

Sting added, “To me, the greatest element in music is surprise, so I’m always open to collaborate with other artists as you never quite know where it’s going to take you. This sounded like an interesting opportunity and I’m excited for people to hear the new track.”

“We all grew up listening to Sting and The Police,” SHAED noted. “He was a huge influence on all of us, so when Steve approached us with the collab, it was a no brainer. We had the best time working with Steve and Sting and really love this track.”