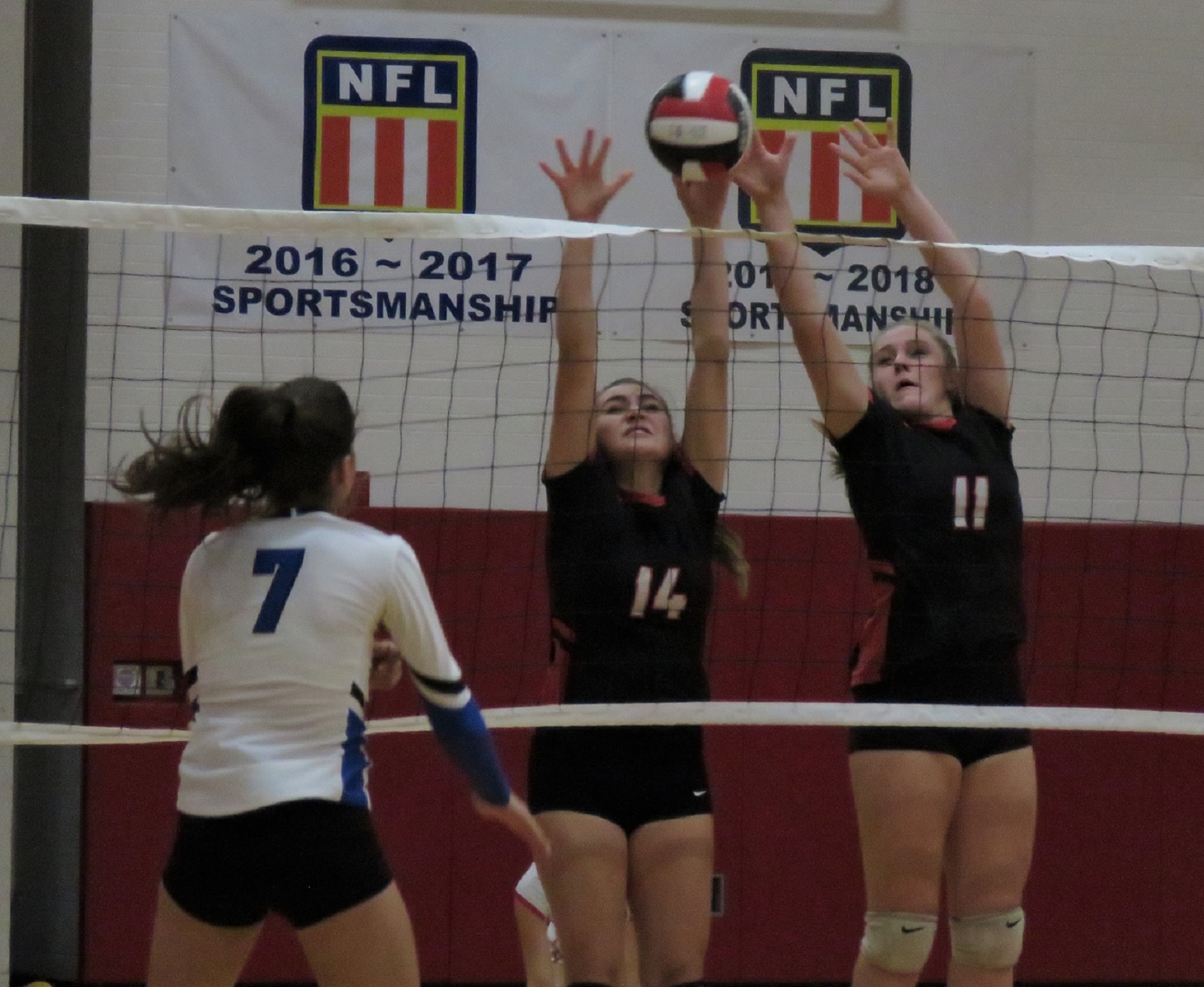 The Niagara-Wheatfield Lady Falcons volleyball team continues to roll in 2019, as the squad defeated the Grand Island Vikings, 3-0, Thursday night in the Falcons Den.

The win inched the Lady Falcons a step closer to its third-straight Niagara Frontier League title and increased the team’s record to 13-0 in division play.

The set was tied seven times in the early goings, and after the Lady Falcons gained a 19-13 lead, the Vikings fought back to make it 21-19, which led to a N-W timeout. Despite the comeback, the Lady Falcons would prevail, 25-21.

The second set was the best of the match, as both teams went back and forth throughout.

The Vikings answered back, though, as the score quickly became tied at 24. N-W scored the next two points to win the set, but not before an entertaining fight by GI.

In the win, Elanna Lysiak had 10 kills and two blocks; Emma Halleen had five kills and two aces; Emily Brochey had 25 assists; and Sasha Zayatz added eight digs and one ace.

The matchup was a bit different from the first time the two teams battled. The Vikings took the Lady Falcons to five sets, before N-W eventually won the match, 3-2, to hand GI its first league loss of the season.

Thursday night, Grand Island coach Bob Simpson said the difference between Thursday night’s match and the first matchup could be summed up in one word.

“Consistency, one word. They were just more consistent than we were,” Simpson said. “We didn’t bring a consistent effort. There were flashes of greatness, but in the end, their coach got them to play at a more consistent level than I did. We kind of let ourselves down in that aspect.”

Niagara-Wheatfield coach Brandi Cochran said her team has gotten better as the season has gone on, which played key in the match’s result.

“I think, on both sides of the court, both teams are stronger. They’ve had a whole season to kind of work out the kinks. We played each other in early September, and you know, you’re still trying to figure out what works. So, I think this time around we had our offense ready, our defense really stepped a lot this match and we’ve been working on that all season. … I think we were just more prepared as a team and it showed,” Cochran said.

In addition, Cochran said early in the season that her team was still improving and building, especially with 11 underclassmen.

“We have a long way to go, and the fact that we are so young it’s not even for this season. It goes into next year and the following year. I mean, I have a freshman, I have sophomores, I have juniors and we do have senior support, which is great. But, yes, I do feel like we are getting better and improving every day. We need to be more intense, but that’s a work in progress. Overall, yes, I feel we’ve improved since the beginning of the year,” Cochran said.

The second set was the best of the match for the Vikings and, in addition to the first contest versus N-W, Simpson said the Vikings have shown they’re capable of hanging with the defending state finals runner up.

“Like I said, it’s the flashes of greatness. We showed we can play. That’s still a state finalist team – they still got players from that squad that played in the state finals. That’s a team that knows how to win and we showed that, yeah, we can compete with them if we just play our game. … It’s just that consistency aspect that really hurt us,” Simpson said.

In addition, Simpson said the Vikings can learn from the loss moving forward.

“We’re gonna learn from it,” he said. “I just said, ‘A team like Niagara-Wheatfield shows you your weaknesses and will wear you down.’ … We learned a lot of stuff by ourselves that we’re going to use moving forward,” Simpson said.

For Cochran and the Lady Falcons, the team’s magic number to clinch another NFL title is down to one.

Standing in N-W’s way is second place Lockport, who can still jump the Falcons barring some losses. N-W doesn’t play the Lions again until Oct. 23 to finish the regular season.

The team could clinch its third-straight league crown at Kenmore West next week and the thought of another championship was exciting to Cochran.

“I think it was a goal in the back of our mind at the beginning of the season. It never really came out verbally at the start of preseason, we just wanted to wait every match and win that one,” Cochran said. “I think if we can solidify another league championship that would be a great feeling, because some of these girls this might be their only sport, or maybe they play another sport where they don’t have a chance to win an NFL title. So it would be awesome. I want it for these girls as much as I, obviously, as a coach would be so proud. They’re such a great group that if they could be champions, I would be so excited for them.”

The possible title-clinching matchup is at 6 p.m. Wednesday, Oct. 16 at Kenmore West.