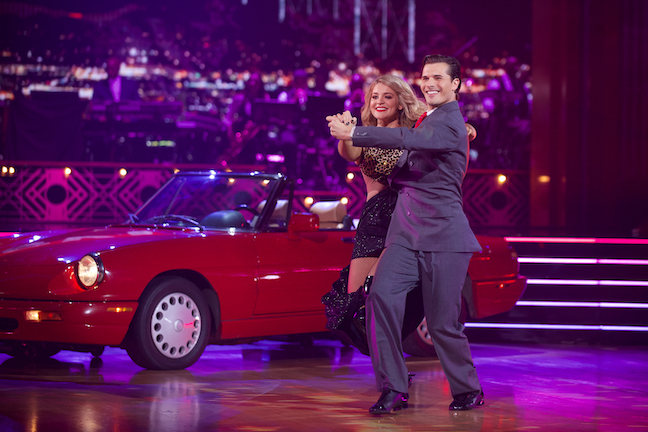 "Dancing with the Stars": Lauren Alaina is shown with Gleb Savchenko on the "Movie Night" episode. (ABC photo by Eric McCandless)

The 11 remaining celebrity and pro-dancer couples competed on the third week of ABC’s “Dancing with the Stars” on Monday. For the broadcast, the show opened with a behind-the-scenes look at some movie magic, including a special “Star Wars Galaxy’s Edge” moment.

Ray Lewis and Cheryl Burke headed home, leaving the 2019 “Dancing with the Stars” Top 10 in the competition.

The celebrity and pro-dancer couples will compete on the fourth week of the 2019 season of “Dancing with the Stars,” live, Monday, Oct. 7 (8-10 p.m. EDT), on ABC. (TV-PG, L) Episodes can also be viewed the next day on ABC.com, the ABC app and Hulu.

Vying for America’s vote, each couple will dance to a variety of hit and well-known songs, including Dolly Parton’s “Jolene,” Tina Turner’s “Proud Mary,” Shawn Mendes’ “If I Can’t Have You,” Seal’s “Kiss from a Rose,” Phil Collins’ “In the Air Tonight,” and Queen’s “Somebody to Love,” among others.

The show will open with the couples entering the ballroom to “Hey Look Ma, I Made It,” by Panic! At the Disco. In addition, as part of ABC’s “Cast from the Past” week, where iconic TV show and film talent reunite in episodes on the network’s comedies and dramas, “Dancing” season 17 alumni Leah Remini will be a guest judge for the very first time.

Each Monday night, the live vote (via abc.com, the ABC app and SMS/text) will be combined with the judges’ scores and tabulated in real-time, with the bottom two revealed during the broadcast. And for the first time in “Dancing” history, voting has been changed this season where the judges will decide which celebrity up for elimination stays in the competition and which celebrity’s journey comes to an end.

The live votes will occur each week only during the live broadcast in the EDT/CDT time zones (but fans in all U.S. time zones may vote within that window).

The couples are (with their dance choice) the following:

Hosted by two-time Emmy Award-winning host Tom Bergeron and Erin Andrews, “Dancing with the Stars” is the hit series in which celebrities perform choreographed dance routines that are judged by a panel of renowned ballroom experts, including head judge Len Goodman, and dancers/choreographers Bruno Tonioli and Carrie Ann Inaba.