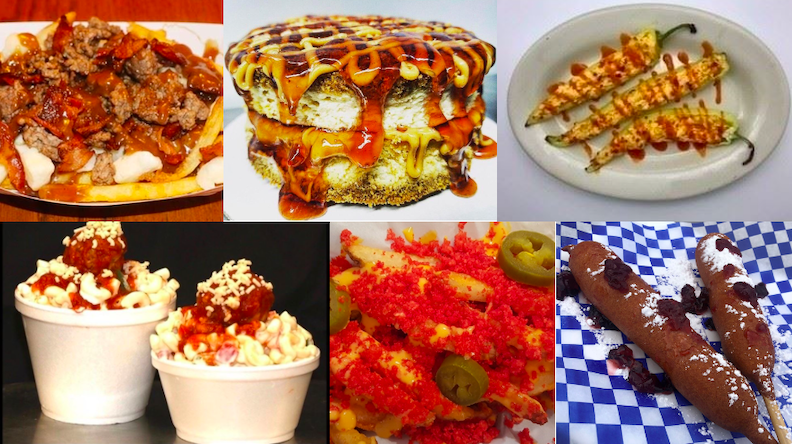 Some of the new food items on display. (Images courtesy of the Erie County Fair)

Flaming hot Cheetos fries, hot candy wings, pierogi poutine and Luv Puffs are among the new foods on this year’s lineup during the Erie County Fair, the “Best 12 Days of Summer.”

On Wednesday, Aug. 7, the gates of the 180th Erie County Fair will officially open to welcome over 1 million hungry fairgoers. During the 12-day event, the Fairgrounds plays host to over 500 food items available at 125 food stands. This year’s bill-of-fare ranges from time-honored regional favorites to limited edition, deep fried novelty treats only found at the Fair.

New items have been added to the menu and are part of the Fair’s “New Food Showdown.” Fair food fans will again be able to vote for the “Best New Food at the Fair” in the Erie County Fair app. Voting will begin opening day and continue thru Aug. 13. The winner will be announced on Thursday, Aug. 15. Past champions have included Mineo & Sapio’s chorizo ciabatta sandwich (2015), Mark’s Pizza and Subs’ deep-fried bologna bites (2016), Babcia’s pierogi’s crab-stuffed mushroom pierogi (2017) and apple quesadilla by Jack's Delicious Taco in a Bag (2018).

Along with the “fairgoer’s vote” for the best food of the Fair, a panel of guest judges will sample and vote on their favorites during the “New Food Showdown Judging Show” that will take place at 11 a.m. Thursday, Aug. 8. The panel will consist of culinary professionals from the Niagara Falls Niagara Culinary Institute, SUNY Erie’s culinary arts program, Delaware North and Artisan Kitchens & Bath, along with media judges.

2019 marks the fourth year of the Erie County Fair's participation in the Independent Health Foundation’s healthy options program. Participating restaurants have signed on to offer a healthy menu item that has been approved by the Independent Health Foundation. The list of healthy options increases each year with menu items approved by dieticians.

Growing each year in popularity, the “Taste of the Fair” Food Festival will return Monday, Aug. 12. Fair vendors will feature over 125 “taste”-sized portions for only $2. A complete listing of items and locations will be available on the Fair’s website, mobile app and on menus located at gates the day of the event.

Adult fairgoers will be able to wash down all their Fair food with one of three, limited-edition beverages. In addition, the Inaugural Erie County Fair cider with a recipe provided by home cider maker Jeffrey Clift of Buffalo, produced by Black Bird Cider Works, will be available at the Fair’s beer gardens.

The Erie County Fair will partner with the FeedMore WNY (Food Bank & Meals On Wheels) to help fill a warehouse with canned goods. Fairgoers will gain free admission to the venue on opening day with the donation of two canned food items. Donations will be accepted at all Fair gates beginning at noon.

Following the conclusion of the 180th Fair, on Wednesday, Aug. 18, the Fair will celebrate “National Birth of the Burger Day.” The day has been set aside to commemorate the invention of the hamburger sandwich that took place during the 1885 Erie County Fair by Frank and Charles Menches of Canton, Ohio. During the Fair, Weidner’s BBQ, located on the Avenue of Flags, will feature its culinary tribute to the birth of America’s favorite sandwich with the “1885 Burger.”