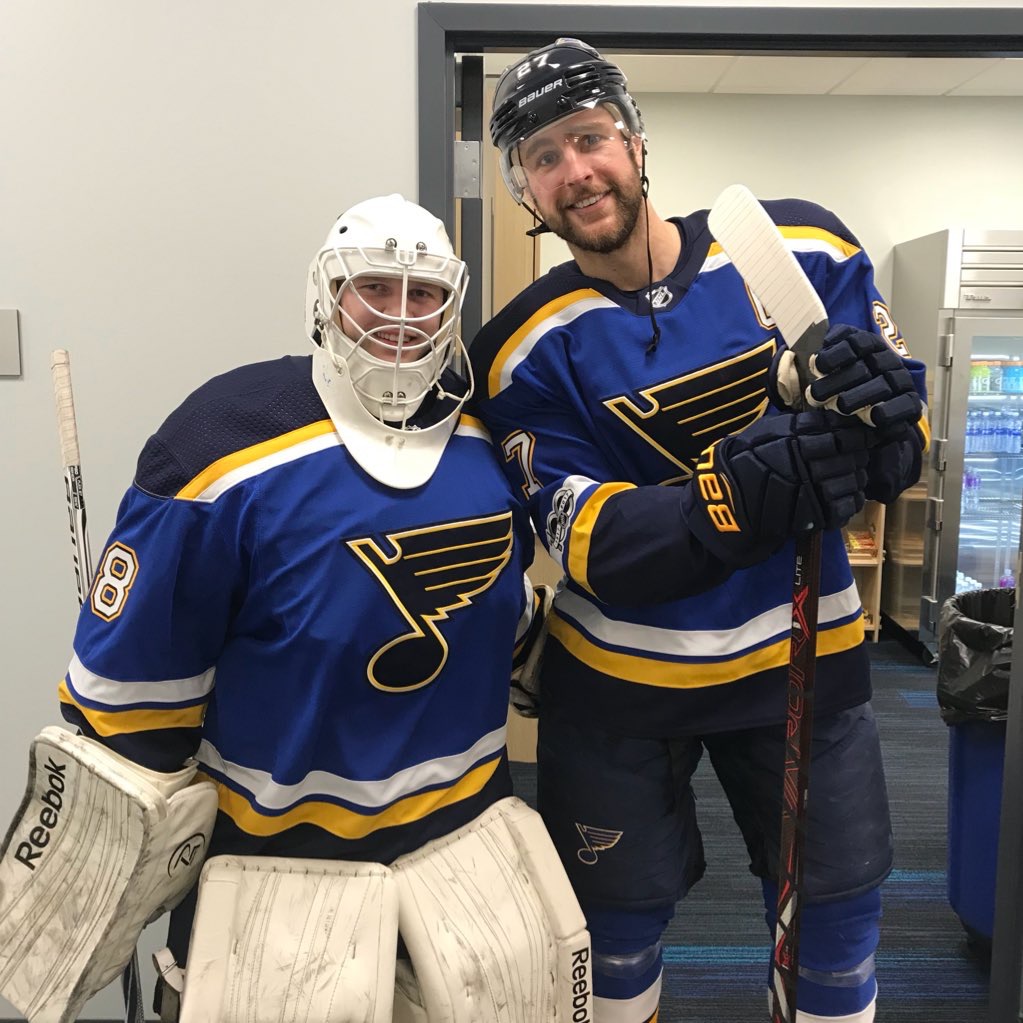 From the nosebleeds to the crease

On an ordinary game day, Blues season ticket holder Tyler Stewart grabs his seat in section 313 of the Enterprise Center just in time to watch his team begin warm-up. Yet an unexpected phone call on Dec. 7, 2017, would lead to a not-so-ordinary game day experience.

Stewart, a 25 year old from St. Louis, grew up a die-hard Blues fan and played hockey his whole life. His career kept him local with appearances as the goaltender at Eureka High School and St. Louis University, and his next call to the net would keep him local as well.

What started as a 5 a.m. work day at his father’s vending machine company would eventually comprise of stopping shots from some of the National Hockey League’s premier players. With [backup goaltender] Carter Hutton injured, the Blues needed to call up goaltender Ville Husso from the club’s American Hockey league affiliate in San Antonio. With a mix of late notice and a flight from San Antonio, it was the beginning of what became Tyler Stewart’s time to shine. Husso would not be able to make it to the arena in time for the Blues matchup with division rival Dallas that evening, so the team had to resort to their emergency goalie.

Now, NHL teams don't just randomize the list of season ticket holders and pick one to be their emergency goalie that year — Stewart put in the time to rightfully earn the club’s trust. Back in 2012 while the NHL and the player’s association tugged and pulled at the league’s collective bargaining agreement, a lockout commenced resulting in a shortened season. While some Blues players stayed back home or played overseas until the start of the season, others stayed in St. Louis for a series of regular skates to stay sharp. Stewart was able to join in on some of these skates and start building a relationship with the Blues organization. While the NHL eventually came to an agreement on a new C.B.A., Stewart’s connections from the skates led to future opportunities when the Blues came calling for an extra goalie at practices, prospect skates or player’s private practice sessions.

Prior to the 2017 season, the NHL instilled a rule that teams must have an emergency goalie present at every game in case of a situation where either team’s backup goalie went down and they needed an extra body. Due to familiarity from skates in the past, the Blues asked Stewart if he wanted to serve as their emergency goalie.

“I told them yeah, of course I’d love to do it. I was already a season ticket holder and it worked out great, I just never really thought they'd actually need me.”

Stewart was at home, killing time between work and what he thought would be a typical night watching the Blues from his seat when he received a call from Ryan Miller, the Blues’ Director of Hockey Operations.

“Hey Tyler, [Blues’ goaltender, Carter] Hutton went down this morning, could you be here by five for warmups?”

“Uhh.. no problem.” a shocked Stewart responded in an attempt to get any words out of his mouth.

“I was just completely caught off-guard by it,” Stewart said. “Alex [Tyler’s wife] is a nurse and works the night shift at SLU Hospital, so she was asleep. I was like, ‘Hey, sorry to wake you up, but I’m going down to do warmups tonight. She’s like, ‘Are you serious?!’ I said, ‘Yeah.’ She’s like, ‘OK, I’m getting up.’”

While Stewart would typically leave his equipment in the car during games, this time he was hauling them into the arena where he grew up going to Blues games to strap them up as a part of his childhood team. Stewart loaded his equipment into his wife’s SUV and departed for Enterprise Center, this time with a drastically different set of nerves and emotions than usual racing through his mind along the short drive.

Upon arriving at the rink, Stewart re-connected with familiar faces from prior skates before he would take the ice for warmups. As game time approached, he sat back in his locker room stall and took in as much as he could.

“I got to listen to the pregame speech, all the stuff they do,” Stewart said. “It’s crazy how loose they are. You would think they would be tight, but they’re joking around like you wouldn’t even think they’re playing a hockey game.”

As memorable as it was sharing the ice with NHL stars, Stewart found just as much enjoyment in the locker room experience.

“The on ice stuff is a blast, but honestly the best part is just being around the guys off the ice. I sat next to [Vladimir] Tarasenko and [Vladimir] Sobotka. They were awesome. They just talked to me like I was one of the guys. It was pretty cool.”

With the foreseen game against the Stars hoisting a critical two points in the division on the line, Stewart avoided anything that could potentially disrupt the team’s focus. He shared a chat with the Blues’ starting goaltender Jake Allen before taking the ice.

“I’m like, ‘Yeah listen, I’m gonna stay out of your way, you do what you need to do,” Stewart said. “You’ve got a big game and I don’t want to mess up your routine. Just tell me whenever to go in.”

With approximately 30 minutes until game time, it was time for the Blues to take the ice. Stewart slid in towards the end of the line in his all white gear and a freshly stitched Blues jersey with his last name and #98 on the back. The warmup music started blasting and he followed his teammates and childhood dreams onto the ice.

Mike Yeo, [head coach of the Blues at the time] joked “I know the guys were kind of revving him up on the way out onto the ice. It’s a pretty good thrill for him and fun when somebody like that can come in and be part of what you have going on.” (per the Blues’ interview archive.)

Jake Allen took the majority of the shots before calling in Stewart to complete the final five minutes of the 15 minute warmup. Stewart steered away shots from NHL stars like Vladimir Tarasenko and Alex Pietrangelo, drawing instant cheers from the crowd and his family watching proudly in section 313.

Stewart’s night in the crease would end there as a pre-game issue with the glass and a self described “90 MPH police escort” would allow call-up Ville Husso to arrive in time to take the reigns of the backup role in the first period.

After a whirlwind of media scrums, Stewart was out of his gear and returned back where he pictured himself watching the game at the start of the day. In section 313 with his families’ company. Only this time with a few souvenirs and a moment he’ll never forget.

“It would have been awesome to get in [the game], but we’ll see what happens next time.”

•••••
Niagara Frontier Publications works with the Niagara University Communication Studies Department to publish the capstone work of students in CMS 120A-B.
These articles do not necessarily reflect the opinions or beliefs of NFP, NU or the communication studies department.
Comments can be sent to the NFP editorial department, care of the managing editor.
Categories
NUsUnlimited NUsUnlimited Side Story