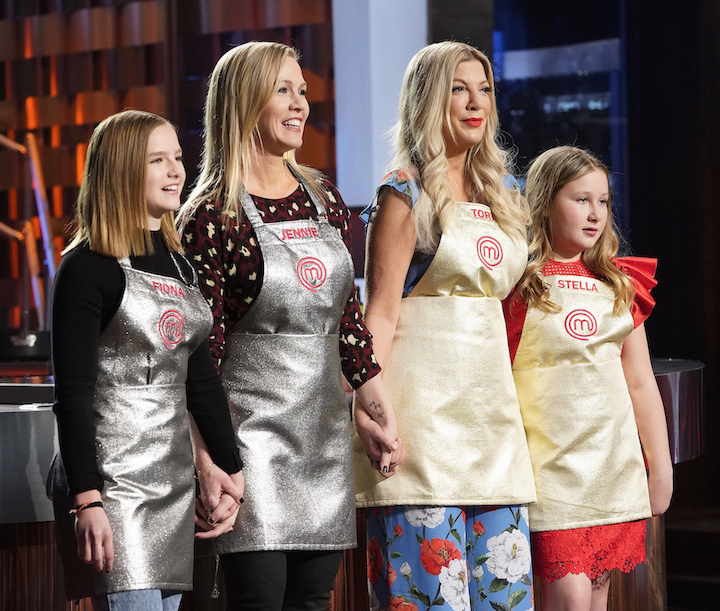 Competing on "MasterChef Celebrity Family Showdown" are, from left, Fiona and her mother, Jenny Garth, and Tori Spelling and her daughter, Stella. The two-night special airs Wednesdays, May 15 and 22. (©Fox Media LLC photo by Greg Gayne)

Stars cook for a cause on all-new, 2-night 'MasterChef Celebrity Family Showdown'

It’s a family affair when stars cook for a cause on the all-new “MasterChef Celebrity Family Showdown,” airing in a two-night special, Wednesdays, May 15 and 22 (8 p.m.), on FOX. Multi-Michelin star chef Gordon Ramsay, award-winning chef Aarón Sánchez and restaurateur Joe Bastianich invite celebrities and their family members into the “MasterChef” kitchen, where they’ll show off their culinary skills in exciting challenges for charity.

The two-night special features four unique challenges, putting each celebrity duo through a culinary test – with more than bragging rights at stake – the winners earn $25,000 donations to the charities of their choice. Additionally, the contestants will face their challenges with a sous chef by their sides, whether it be one of their own children or another member of their family.

Here are the “MasterChef” matchups:

In a home fridge swap challenge, these two “Beverly Hills, 90210” stars will battle it out with help from their young daughters to create a dish using ingredients found in each of their assigned refrigerators. Spelling (@Tori_Spelling) and her 10-year-old daughter, Stella, are playing for Girls Inc., while Garth (@jenniegarth), and her 12-year-old daughter, Fiona, battle it out for Feeding America.

•Johnny Weir and his brother, Boz, vs. Tara Lipinski and her husband, Todd

This Olympic figure skating broadcast team will go head-to-head in a fish dish showdown! Two-time figure skating Olympian Weir (@JohnnyGWeir) cooks with his brother, Boz, for Alzout, while his fellow commentator and Olympic gold medalist Lipinski (@taralipinski) partners up with her husband, Todd, to compete for the Boys & Girls Club.

•Lisa Vanderpump and her daughter, Pandora, vs. Nicole “Snooki” Polizzi and JWoww

In a reality TV blind taste test, four epic personalities duke it out to replicate one of Bastianich’s dishes from taste alone. The reality television personality stars Vanderpump (@LisaVanderpump), and her daughter, Pandora, compete for their very own Vanderpump Dogs, while “Jersey Shore’s” Snooki (@snooki) cooks with her co-star, JWoww (@JENNIWOWW), for Kulture City.

From the ring to the kitchen, two boxing legends come out swinging in a “Keeping up with Gordon Match,” as they will be tasked to replicate his dish. Holyfield (@holyfield) brings his daughter to the challenge, 28-year-old Ebonne, to fight for the Holyfield Foundation. De La Hoya (@OscarDeLaHoya) will vie for the title with his 19-year-old daughter, Atiana, for the Oscar De La Hoya Foundation.