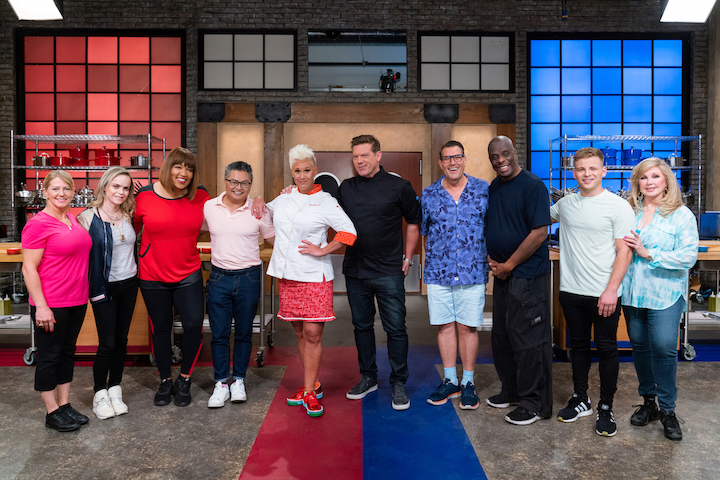 Anne Burrell and Tyler Florence are back to lead a new star-studded cast of cooking-challenged celebrities through culinary boot camp in the return of “Worst Cooks in America: Celebrity Edition,” on Sunday, April 21 (9 p.m. ET/PT). In the seven-episode season, Anne and Tyler each lead a team of stars through a series of high-pressure cooking drills where only the most-improved recruit left standing is awarded $25,000 for the charity of their choice and bragging rights for their chef mentor. This season's celebrity recruits are: Jim J. Bullock, Morgan Fairchild, Tonya Harding, Jonathan Lipnicki, Taryn Manning, Alec Mapa, Kym Whitley and Jimmie Walker.

"Competing on ‘Worst Cooks’ is a very tough role for these celebrities – they start off as true kitchen disasters, but, by the end of boot camp, their food skills are impressive," said Courtney White, president, Food Network. "Watching Anne and Tyler mentor this cast of larger-than-life personalities is endlessly entertaining.”

In the season premiere, the eight celebrity recruits arrive in boot camp, and Anne and Tyler ask them each to cook their favorite restaurant dish to see how they measure up to the original. Then, the chefs teach the celebrities how to make a classic steakhouse meal, and it becomes clear some of these celebs just don't have the chops. After, Anne and Tyler pick their teams in an award-show inspired ceremony suitable for the celebrities.

Upcoming episodes feature a food trivia-inspired game night, sushi challenge, and “Chopped”-style battle. In the finale on Sunday, June 2, the two most-improved cooks must create a restaurant-quality meal for guest judges Leah Cohen, Zac Posen and Melba Wilson. The judges then determine who is awarded the $25,000 grand prize for the charity of their choice, and bragging rights for their team leader.

Fans can learn more about the famous faces competing for kitchen glory at FoodNetwork.com/WorstCooks, plus browse photos from the challenges and take quizzes to test their kitchen know-how. Viewers can follow #WorstCooks on social channels to watch Tyler and Anne go head-to-head in fun challenges and see behind-the-scenes interviews with the recruits.