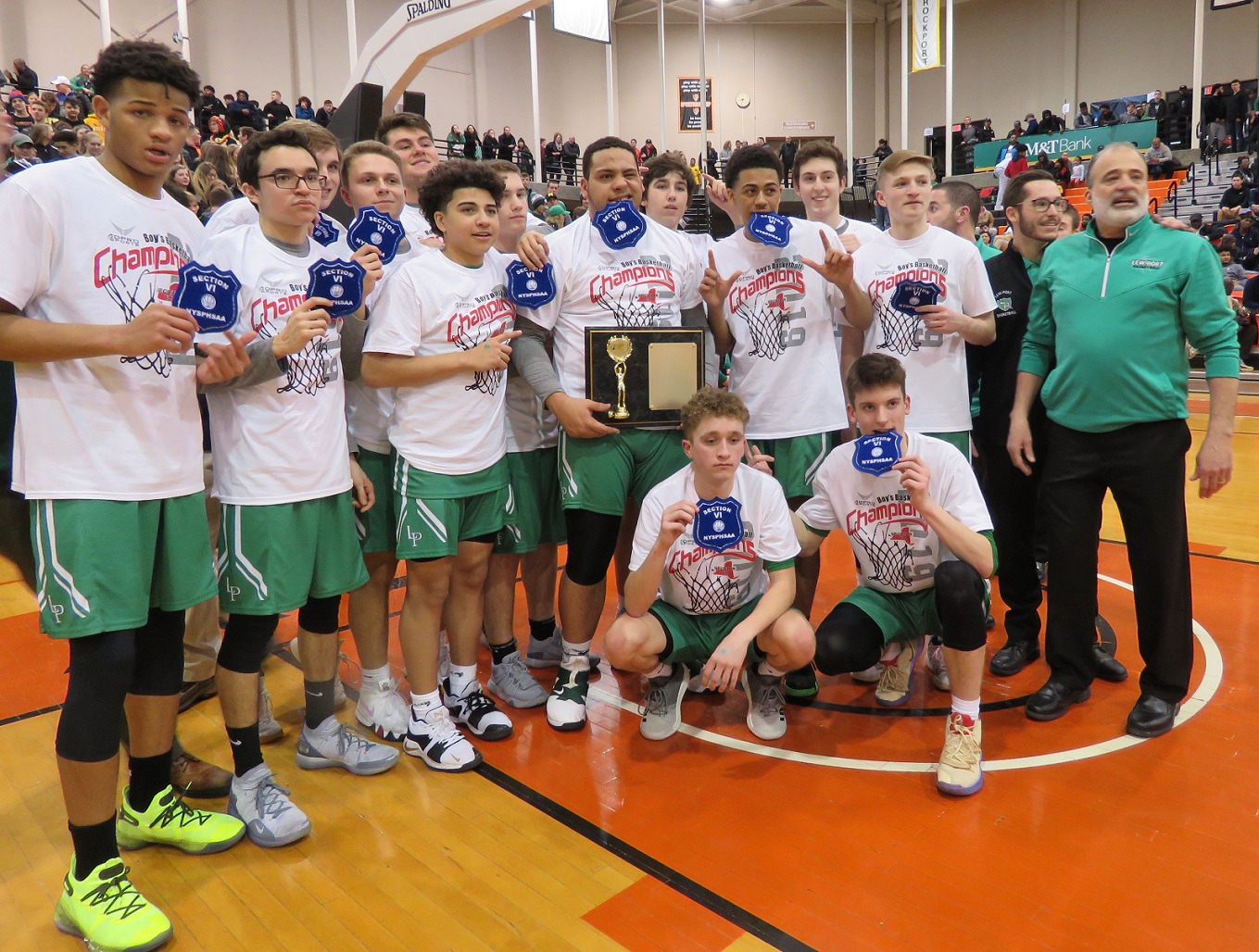 The Lewiston-Porter Lancers pose following a 51-40 win over Amherst to clinch its first Section VI title since 1978. (Photo by David Yarger)

It’s been 41 years since the Lewiston-Porter Lancers boys basketball team has won a Section VI championship.

Saturday night, the Lancers could party like it’s 1978, as the team defeated Amherst, 51-40, in the Section VI Class A2 title game.

For the Lancers, senior Trent Scott and freshman Roddy Gayle did majority of the heavy lifting offensively, but it was what L-P did on defense that guided it to victory.

In the first quarter, Scott scored 7 points, while Gayle added 4 and the Lancers led 11-10.

In the second quarter, Amherst held a 21-18 lead, but Gayle was quick to erase that. Gayle scored five-straight points, including a layup to draw a foul. Gayle netted the free throw and the Lancers led going into the break, 23-21.

Lew-Port began to distance themselves from the Tigers a bit in the third.

With 3:45 left in the quarter, Zack Clayborne, who made a big impact on the glass for L-P, netted his first bucket to make it 32-25. The field goal was the first bucket by a Lancer not named Gayle or Scott.

In the final quarter, the Lancers would win it with good defense and free throws.

After a Gayle trey, the Lancers went on to make 11 free throws, including five from Gayle, to put the game on ice.

With a stellar fan section in attendance, Lew-Port’s players celebrated amongst its “Green Machine” faithful.

For the Lancers, Scott led the way with a game-high 21 points, while Gayle added 20.

Of his big game, the senior Scott said, “It felt great. We went out there as a team, played unselfish and I played my butt off and we got the win.”

Additionally, Scott added, “It feels great to be a part of this and definitely make an impact on everything. We did it.”

Lancers coach Matt Bradshaw said he was thrilled to be a part of the first Section VI champion since 1978.

Bradshaw also praised Scott for stepping up in crucial moments as a senior.

“This is what he’s a senior for,” Bradshaw said. “He made big shots when we needed them.”

Additionally, Bradshaw acknowledged the defensive presence of Gayle, who guard Amherst’s Jaylen Stewart and held him to 6 points.

“That was the defense of the year right there,” Bradshaw said. “He shut Stewart down. Roddy Gayle did a heck of a job on defense. That’s more important than any of the points scored.”

Bradshaw added that in the last three games, the Lancers defense has held Health Sciences, Cheektowaga and Amherst to 21, 20 and 18 second half points, respectively.

The win was bittersweet for the Lancers, as well, as the last time L-P made the A2 finals in 2016, they were defeated by Amherst.

The Lancers season continues at 8:15 p.m. Tuesday at Buffalo State versus the winner of the Class A1 finals between West Seneca West and Williamsville East.