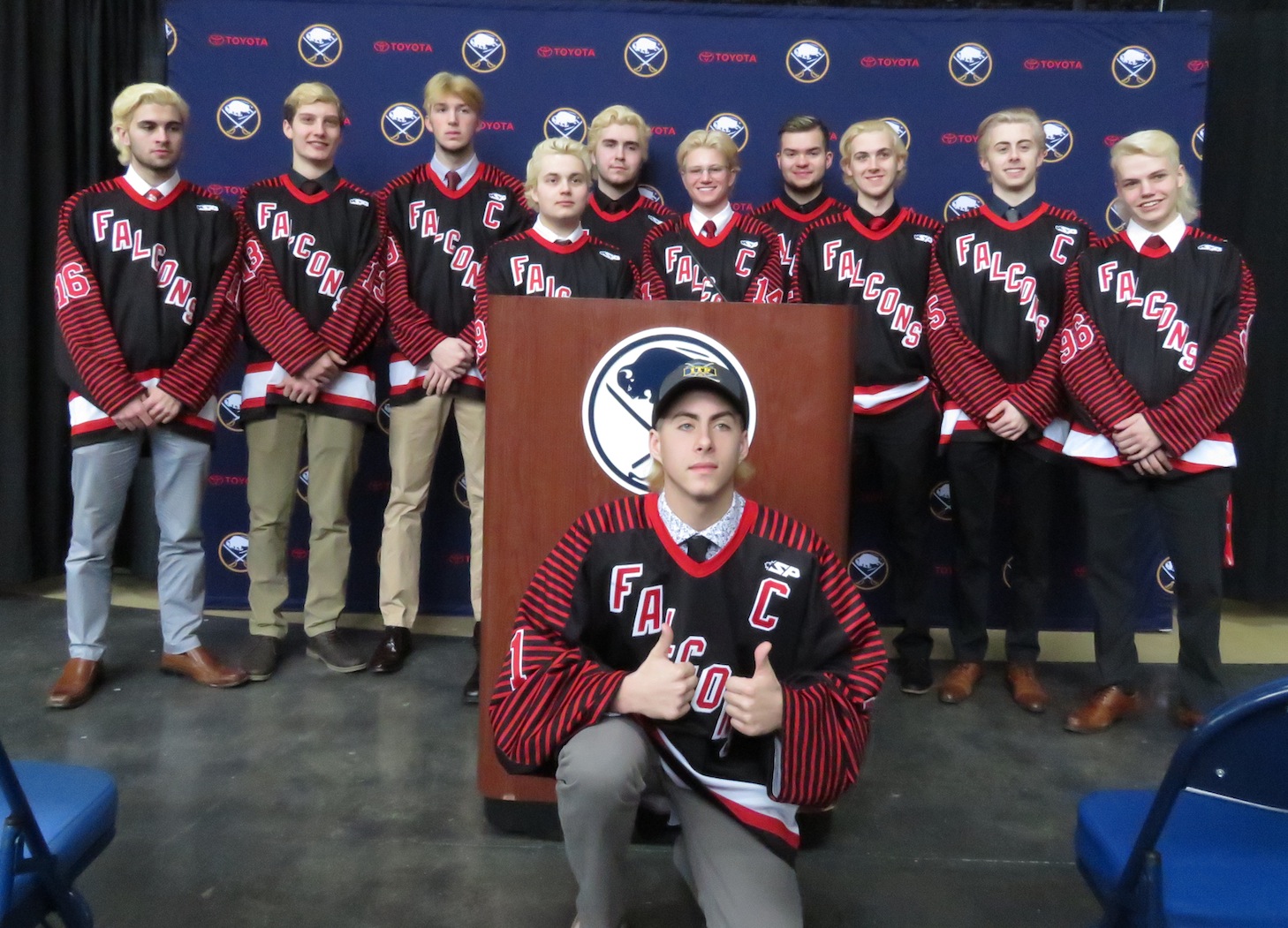 The Niagara-Wheatfield Falcons hockey team is, once again, playing its best hockey at the right time – the playoffs.

After enduring a winless month of January and finishing with a 10-10 record, the Falcons entered the Section VI large school postseason with questions of how far the playoff regulars would last this season.

The team will play in the finals for the eighth time in 10 years and is vying for its second-straight sectional crown.

The Falcons, winners of four of its last five games, have a multitude of experience coming into the finals game versus Orchard Park, as several players were on last year’s team, which won the Section VI title and embarked on a run to the state finals.

And after enduring a tough regular season spell, some of the Falcons said the season turned after the tough stretch of games in January.

Falcons coach Rick Wrazin said he believed the season turned around with the winless January.

“There was concern with the coaches that we have to keep our kids from losing confidence, because we were playing really good hockey, we just weren’t winning games. … It’s a tough stretch when you’re not winning, but I think they could see that they were playing better and they didn’t lose any confidence. They knew we were moving in the right direction.”

Wrazin added that the victory over St. Joe’s to finish the regular season was a big confidence boost to show the players the team was moving forward in the correct direction.

Senior goaltender Peyton Siegmann, who has given up one goal in two postseason games this year, praised the coaching staff for the season turnaround.

“That man Richard Wrazin, he’s a hockey genius, along with our other two coaches, so they really turned the season around for us,” Siegmann said.

Senior Jake Halleen added that the Falcons always turn things around come playoff time, while Cam King and Chris Cacciatore noted the team started playing a more physical brand of hockey down the stretch and played more as a team.

Experience could play a key role in Monday night’s game. While the Falcons have experience in the finals, the game is the Quakers’ first title appearance.

“I think we have a lot of guys on the team with big game experience,” Wrazin said. “That’ll carry over and hopefully calm the nerves. … Hopefully we can keep them contained, and the guys that have been here can lead by example. This time of the year, you can’t get too high or too low.”

Lee added, “For a lot of us seniors, we’ve been here already. … Some have played more than one year. I think it only carries us further. Orchard Park hasn’t been here, so that’s tough on them, but I think we’ll be alright.”

Siegmann said, “We’ve all been here before. It’s the same thing as last year; have the seniors lead the younger kids.”

Halleen replied, “We’ve all seen seniors have their seasons end, so we know time’s coming up, we just have to and make out last game the states.”

“It’s a big stage, but we just have to keep playing the way we’ve been playing lately,” King said.

Cacciatore noted that majority of team grew up watching the N-W program, which won four-straight titles between 2012 and 2015.

“Eight out of the past 10 years; we were growing up watching the four-peat and you just come out and play how they did with the same heart and we’ll get the W,” Cacciatore said.

Orchard Park has played N-W tough this season, with wins of 7-4 and 8-4. Despite the defeats, the team remained optimistic that that was then and this is now.

“We know they’re a big transition team,” Wrazin said. “I think, as far as overcoming the losses, this is a pretty loose group. So I think they’ll just put that behind them and move forward. It’s a new season.”

Lee said he couldn’t foresee the team giving up that many goals again and added it’s not easy to beat a team three times in one season.

Siegmann said the game would come down to work ethic.

“It’ll come down to hard work, and we outwork every team in the league. That’s how we were raised, that’s how we were built. We’re a grinder team. … It’s a brotherhood, so we do everything for each other,” Siegmann said.

Cacciatore agreed, “No one works harder than us. By the end of the season, everyone knows that we’re coming to play. … We’re not worried.”

King added, “Those were self-inflicted wounds and I think we’re prepared. We’re not gonna give up the stretch goals like we did in the previous games.”

The Falcons quest for another Section VI title starts at 8:55 p.m. tonight at HarborCenter.