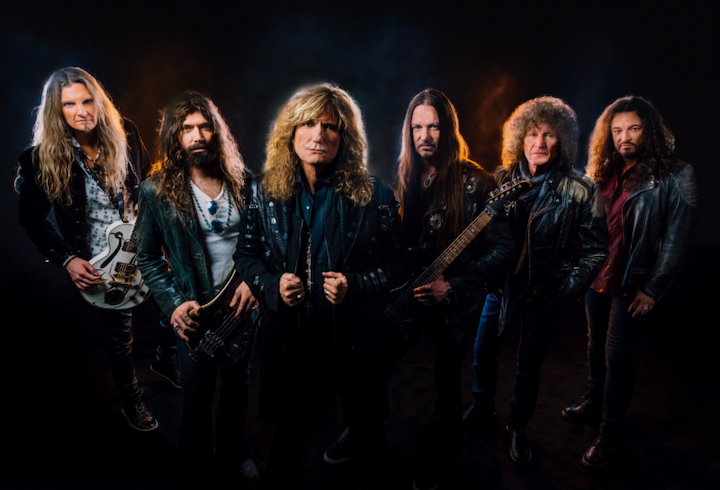 One of the hardest-rocking bands in history is back on the road and headed to Seneca Niagara Resort & Casino. Whitesnake will bring its “Flesh & Blood World Tour” to the Seneca Niagara Events Center at 8 p.m. Saturday, May 18. Tickets go on sale at noon Friday, Feb. 22.

Whitesnake has confirmed a May 10 release date for their upcoming studio album, "Flesh & Blood," via Frontiers Music Srl. The album will be available on CD/LP/digital formats. Fans can pre-order "Flesh & Blood" here: http://radi.al/FleshAndBlood

The 13 original, visceral tracks on “Flesh & Blood,” the band’s 13th studio album, are said to be “all killer, no filler.”

Whitesnake has been rocking worldwide audiences since 1978. The band was formed after frontman Coverdale departed the legendary Deep Purple. The band immediately set out taking audiences by storm with a powerful blues rock sound. Whitesnake released a string of popular albums in England, including “Trouble,” “Lovehunter,” “Ready an’ Willing” and “Slide It In.” They were a mainstay on the British charts and airwaves, but remained lesser known in the U.S. That all changed in 1987, with the release of their “Whitesnake” album.

Almost immediately, the band exploded to superstardom, fueled by hit songs “Here I Go Again,” “Is This Love” and “Still Of The Night,” along with some of the most popular music videos ever recorded. The follow-up album, “Slip Of The Tongue,” was also a huge commercial success and produced songs “Fool For Your Loving” and “The Deeper The Love.”

If the winter weather has you thinking warm thoughts, The Bear’s Den Showroom inside Seneca Niagara Resort & Casino has just what you need to keep looking forward to spring. The May entertainment lineup includes a number of hot shows by big stars, including: “Heartbeat City: A Tribute to The Cars” on Friday, May 3 (8 p.m.); Tony Orlando on Saturday, May 11 (8 p.m.) and Sunday, May 12 (5 p.m.); and Frank Caliendo on Friday, May 17 (7 and 10:30 p.m.)

Tickets go on sale at noon on Friday.

“Heartbeat City” faithfully re-creates the look and sound of one of the most successful bands of the late 1970s and ‘80s: The Cars. Arriving on the scene in the late ‘70s, The Cars quickly changed the style of the hit music of that era, leading the way into the ‘80s. They were a constant presence on both radio and TV, with hit songs and popular music videos. “Heartbeat City” delivers classic Cars hits including “Just What I Needed,” “My Best Friend’s Girl,” “Let The Good Times Roll,” “You Might Think” and “Drive.”

Tony Orlando has been making hit music for nearly 60 years. He first hit the charts as a solo artist in 1961 at the age of 16, with songs such as “Halfway to Paradise” and “Bless You.” Throughout the balance of the ’60s, Orlando continued as a solo artist, as well as a successful music executive, working with such stars as Barry Manilow, The Yardbirds, James Taylor and Blood, Sweat and Tears.

In 1970, he scored an international hit with “Candida” as lead vocalist of Dawn, which later became known as Tony Orlando and Dawn. Other hits followed, including “Knock Three Times” and “Tie a Yellow Ribbon Round the Ole Oak Tree” – which was the top-selling hit of 1973 and one of the biggest selling singles of all time. In addition to their music success, Tony Orlando and Dawn also had a hit variety television program from 1973-77.

Orlando has continued to be a top entertainment draw in cities across the U.S., and has appeared in several television series and motion pictures throughout his career.

Frank Caliendo is regarded as one of the funniest and most talented impressionists and comedians of modern times. Known for his impersonations of well-known personalities John Madden, John Gruden, Robert DeNiro, George W. Bush and Donald Trump, he has been a popular draw on the comedy circuit and a bona fide star on television and in movies.

He hosted and starred in his own TV program, “Frank TV,” on TBS in 2007 and 2008, and has appeared as a guest on multiple comedy, sports, entertainment and news programs across the country and on major national networks. Caliendo also has released six successful comedy albums, hosts the popular podcasts “Al & Frank Try To Be Serious,” and “Comic Playground,” and performs live to sold-out shows across the country.

The Southern Tier will be ready to dance when Billy Ray Cyrus performs at Seneca Allegany Resort & Casino at 7 p.m. Saturday, May 18. Tickets go on sale at noon on Friday.

Cyrus exploded onto the country music scene in the 1990s and best exemplified how Nashville’s take on the music business changed during that decade. His first album, 1992’s “Some Gave All,” debuted at No. 1 on the Billboard album charts and stayed there for 17 weeks. The album was fueled by Cyrus’ first single, which would go on to sell millions of copies and help launch a dance line craze: “Achy Breaky Heart.” Other hits from the album included “Could’ve Been Me,” and “She’s Not Cryin’ Anymore.”

His second album, “It Won’t Be the Last,” also debuted at No. 1, and included the Top 10 singles “In The Heart of a Woman” and “Somebody New.”

Cyrus has released 12 studio albums and has scored a total of eight Top 10 singles since his debut. In addition to his successful music career, he has starred in numerous television shows, most notably “Doc” (2001-04) and “Hannah Montana” (2006-11), which helped launch his daughter, Miley, into superstardom.

Tickets for all shows may be purchased at any Seneca Resorts & Casinos location, online at www.ticketmaster.com, at any Ticketmaster location, or order by phone by calling 1-800-745-3000.

Seneca Niagara Resort & Casino is located just minutes from the world-famous Niagara Falls in Western New York, near the Canadian border. Seneca Allegany Resort & Casino is nestled at the foot of the Allegheny Mountains along the New York/Pennsylvania border, located off Exit 20 of Interstate 86 near U.S. Route 219.