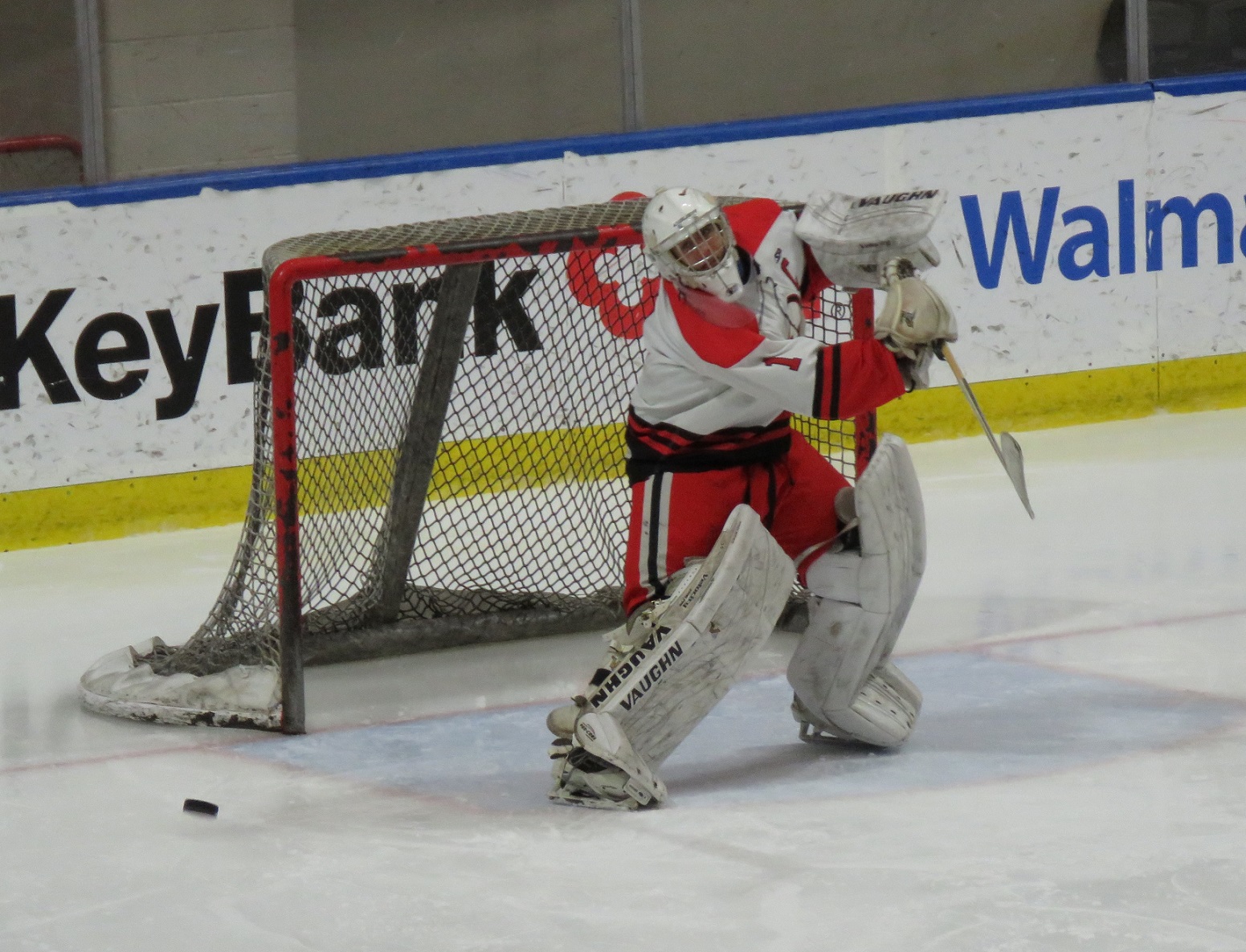 Niagara-Wheatfield goalie Peyton Siegmann passes the puck up the ice. In net, Siegmann pitched a shutout in the Falcons 3-0 win over Clarence. (Photo by David Yarger)

The Falcons are moving on.

Offense was tough to come by in the first period, as the score was tied at zero. Clarence led the shots on goal battle, 6-5, but each team only had one close opportunity for a goal, which was turned aside.

The second period offense started quickly, as Falcons senior Chris Cacciatore netted the first goal for N-W 1:09 into the frame.

Less than two minutes later, Caleb Lee’s wrist shot trickled past the Clarence goalie to give the Falcons a 2-0 lead. The goal was assisted by Cacciatore and Cam King.

Clarence had opportunities, as the Red Devils won the shots on goal battle, 11-7, but each opportunity was turned away by Siegmann, including a save late in the period where he sprawled out on his back with several Red Devils surrounding him.

A little less than seven minutes into the third period, Siegmann stopped a wide-open wrister with the glove, effectively keeping Clarence off the scoreboard.

With 5:45 left, and the puck in the N-W crease, Siegmann stuck his pad out to keep it from entering the net, along with a little assistance from his defense.

With just under two minutes remaining, Clarence pulled its goalie to get the six-on-five man advantage.

The opportunity favored N-W, though, as Cacciatore netted an empty-net goal to seal a 3-0 victory for the Falcons.

Falcons coach Rick Wrazin said the game’s momentum changed with Cacciatore’s goal early in the second, then Lee’s right after.

“When that happened, I really thought we would be able to keep majority of the momentum the rest of the game,” Wrazin said.

Wrazin added that he sensed some of his younger players felt some nerves early on, but with seniors like Cacciatore, Lee and Siegmann, it helped the team progress.

In the win, Siegmann made 23 saves, while Cacciatore added two goals and assist. Lee chipped in a goal and an assist.

Of the early second period goal to get the Falcons rolling, Cacciatore said, “(It was a) big momentum (boost). We just needed something to get us going and it got us there.”

As the defending Section VI large schools champions, Wrazin admitted the team is playing with a target on its back.

“If you come back as the reigning champ, I think you carry that throughout the season and throughout the playoffs,” Wrazin said. “We know what we have to do coming in and hopefully we’re able to continue to do it.”

The Falcons will face No. 1 seeded Lancaster at 6 p.m. Tuesday at HarborCenter.

During the regular season, the Falcons defeated the Legends twice, but Wrazin said the two games were very early in the season and, on Tuesday, it will be completely different.

“We played them twice so early in the year I think it’s hard to take a whole lot out of it. I really think what you’re looking at is two good teams facing off in the playoffs against each other and we have to play the right way and that’s what it’ll come down to,” Wrazin said.