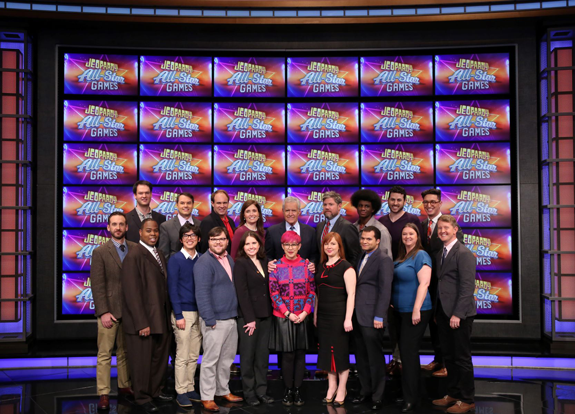 Let the games begin: Six teams of elite “Jeopardy!” contestants are set to face off in the “Jeopardy! All-Star Games,” presented by Consumer Cellular. Starting Wednesday, Feb. 20, fans will have the chance to see their favorite players join forces and play “Jeopardy!” like it’s never been played before: in teams.

The 18 elite contestants returning for the “Jeopardy! All-Star Games” are among the winningest and most popular players in recent series history. Six teams are composed of three players each, with one designated team captain. The team captains are some of the most notable names to ever play the game: Colby Burnett, Buzzy Cohen, Julia Collins, Ken Jennings, Austin Rogers and Brad Rutter. The teams are as follows:

The “Jeopardy! All-Star Games” will air over the course of 10 weekdays from Wednesday, Feb. 20, to Tuesday, March 5 (airing locally at 7:30 p.m. on WIVB-TV Channel 4). The first round of play consists of two, two-game matches played over three shows. The first-round match-ups are:

To learn more about how the tournament works, watch this explanatory video:

To learn more about the tournament, visit www.Jeopardy.com.

“Jeopardy!” began its 35th anniversary season on Sept. 10, 2018. With a weekly audience of 23 million viewers, “Jeopardy!” is the top-rated quiz show on television, and has won numerous awards and distinctions over the course of its 30-plus years on the air (including the 2017 Emmy for Outstanding Game Show). The show holds the Guinness World Records title for the most Emmy Awards won by a TV game show (34); it is also the recipient of a 2011 Peabody Award.