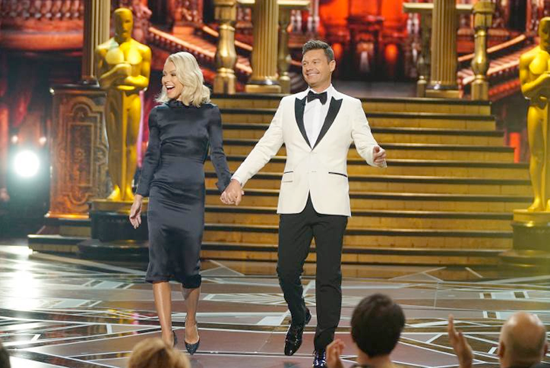 Kelly Ripa and Ryan Seacrest during the 2018 edition of "Live's After Oscar Show." (Photo by Eric McCandless/Disney|ABC Home Entertainment and TV Distribution)

'Live with Kelly and Ryan' slate 'After Oscar Show' for Feb. 25

The morning after Hollywood’s biggest night, “Live with Kelly and Ryan” hosts Kelly Ripa and Ryan Seacrest will be up bright and early to continue the celebration with “Live’s After Oscar Show.” The broadcast will air in national syndication on Monday, Feb. 25, live at 9 a.m. EST.

The “Live” team will bring the top-rated morning program coast to coast for the telecast, which originates from the Dolby Theatre at Hollywood & Highland Center just hours after the 91st annual Oscar ceremony will have wrapped up on the same stage. Ripa and Seacrest will chat with winners, recap all of the excitement from the night before, and showcase exclusive backstage interviews with the night’s biggest stars. The hosts also will showcase the iconic Oscar red carpet, the fashions and the A-list attendees’ final thoughts as they head into the Dolby Theatre.

In years past, “Live’s After Oscar Show” has offered unique performances as part of the one-hour broadcast. This year, Grammy-nominated singer/songwriter Bebe Rexha will be on hand to rock the Dolby Theatre stage.

For fans who will be in the Los Angeles area the morning of Feb. 25, tickets to attend “Live’s After Oscar Show” are available through the “Live with Kelly and Ryan” website, KellyandRyan.com.

The 91st Oscars will be held Sunday, Feb. 24, at the Dolby Theatre at Hollywood & Highland Center in Hollywood, televised live on The ABC Television Network. The Oscars also will be shown live in more than 225 countries and territories worldwide.