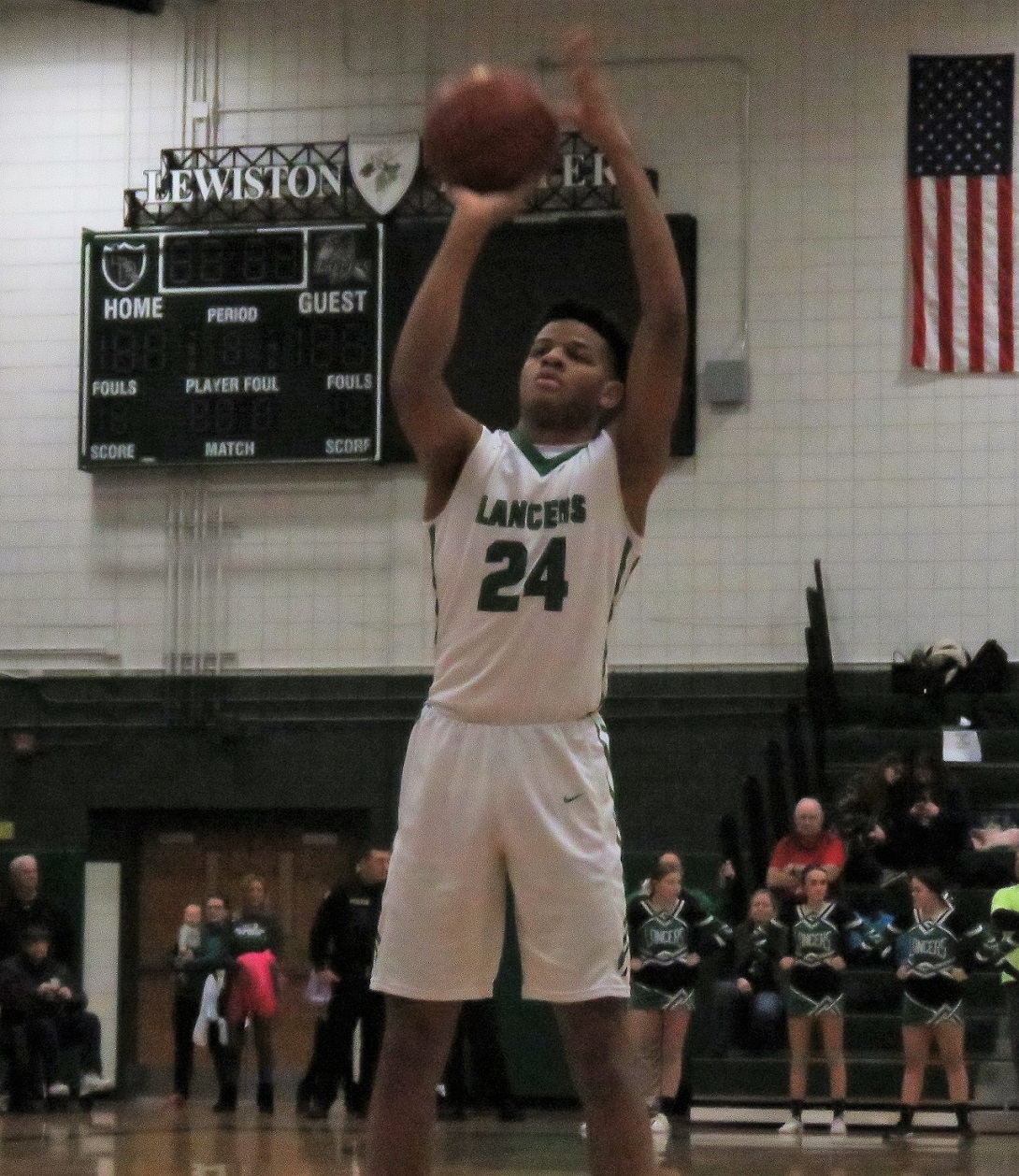 Roddy Gayle shoots a free throw for the Lewiston-Porter Lancers during a recent contest versus Niagara-Wheatfield. Gayle led the way with 20 points. (Photo by David Yarger)

Lancers b-ball putting together one of best seasons in history

That’s how long it’s been since the Lewiston-Porter Lancers boys basketball team has been crowned Niagara Frontier League champions.

That dates back to 1978 when the Lancers hoisted their most recent Section VI title.

That’s the year all those other numbers could reset.

The Lancers have come into the 2018-19 season with, quite possibly, one of the most talented rosters compiled in some time.

The trio of senior Trent Scott, freshman-sensation Roddy Gayle and eighth-grader Jalen Duff has helped catapult the Lancers into one of the most feared offenses around Western New York.

Amidst the high-powered offensive ability, the team has been steady on the defensive end, as well. L-P averages 56.6 points allowed per game, with the highest total (84) coming versus Kenmore East and the lowest (43) coming versus Wilson.

The success on the court has also caught the rest of the state’s eyes, as the Lancers are currently ranked 12th amongst Class A teams in New York. The team also sits atop of Class A-2.

Lancers coach Matt Bradshaw was upbeat about the start to the season and said the big reason the team is where it’s at is because of chemistry.

“We play together, we play as a team, we play selfless. We have a lot of good players on our team who could want just numbers, but they care about one another; they wanna see each other do well,” Bradshaw said. “We just play together and I don’t think I’ve ever had a team – I’ve obviously never had a team this talented – but a team this talented that shares the ball just so selflessly as I have with these guys.”

The team received a huge boost of talent this past fall as Gayle transferred over from Niagara Falls. Gayle, an NFL First Team all-star last season as an eighth-grader, has made a smooth transition into the Kelly green and white, as he leads the Lancers in scoring with 24.4 points per game.

Gayle joined forces with Scott, who was also an NFL First Team all-start last season and averages 17.6 points per game this season. The duo gives Bradshaw two capable playmakers who can erupt for a big night any given gameday, but he said it also opens things up for other guys.

Trent Scott dribbles the ball with Grand Island’s Cam Sionko guarding him during the Lancers’ recent battle with the Vikings. (Photo by Larry Austin)

“They’re able to go off any night, because they have players around them that have to be accounted for,” Bradshaw said. He named Duff, Zack Clayborne, Jason Boslet and Jack Bernstein as guys who can shoot and make plays if too much attention is focused on Scott and Gayle.

“Those guys help those guys get those numbers; they don’t get them on their own. They are talented and they’re crazy good offensively, but they have help,” Bradshaw added.

Gayle, who is 15 years old, stands at 6-foot-4-inches tall and has already put together a highlight reel of dunks in two years of varsity ball. One of his most impressive came in a 100-53 victory over Niagara-Wheatfield, where Gayle took a stolen pass and jammed home a windmill dunk – very rare for a high-schooler, let alone a freshman.

“Roddy’s 15 years old. He’s doing things that I don’t see kids 17 or 18 do. He’s so selfless: he’s a pass-first kid, but I think, if he wanted to, easily he could score 30 a game. But he knows how important it is to get everyone involved, and he’s a coach’s dream. As good of a player (as) he is, he’s even a better kid. He’s coachable; he’s just blended in with the kids. He’s just a coach’s dream,” Bradshaw said.

With Gayle and Scott leading the way, Bradshaw and the Lancers have had success while starting an eighth-grade point guard in Duff. Eighth-graders on varsity are rare feats, but Duff has stepped into the starting role confidently, averaging 13.5 points per game. Duff recently made four 3-pointers and scored 18 points in a win over Niagara-Wheatfield.

Some coaches would be weary of starting a young player at such an important position, but Bradshaw had nothing but praise and confidence in Duff.

“Jalen gets everybody going. He’s got a (ball) handle that I’ve never had a kid have (such) a handle. He’s worked at this and he’s prepared himself for this; he’s dribbled his entire life. He’s the playmaker. He spreads the floor, he drives, he kicks, he runs the offense, he distributes the ball. And right now, in his career, as an eighth-grader, he doesn’t really care about scoring; he’s selfless,” Bradshaw said.

After defeating North Tonawanda 63-57 on Tuesday, the Lancers beat Kenmore West on Friday, 85-59. They have a tough NFL matchup at Lockport at 6:30 p.m. Tuesday before heading into the tougher part of the schedule.

Niagara Falls defeated Lewiston-Porter last year in the NFL crossover title game with Gayle and is currently ranked ninth in the state for Class AA. The game between league rivals is expected to be one of the biggest ones of the season and has already garnered a plethora of social media hype. The matchup could be a preview for the eventual 2019 NFL Crossover Championship, as well.

Cardinal O’Hara will boast another offensive test for the Lancers, coming in ranked third in NYS for Class B.

Park will be the cherry on top to a difficult three-game swing, as the defending state champs are currently ranked second in NYS for Class A.

Despite the daunting task at hand, Bradshaw said he’s just looking to take everything one day at a time.

“We’re just going to continue to get better,” he said. “I’m not even looking forward to those games. The idea in basketball is to be peaking at the right time. We don’t want to be great now and get average. We wanna continue this climb, and what we talked about was, especially when you have an eighth- or ninth-grader, is consistency. We have to be consistently great.”

The Lancers have won three NFL titles, with the last coming in 1984-85 (a share with Nichols.) Additionally, the team has won five Section VI titles. (Dating back to the old Lewiston High School in the ’40s)

With a roster, that Bradshaw called the best he’s ever had, full of talent, the possibilities for a fourth NFL title and possibly a sixth Section VI championship are endless.

“We take it practice by practice, and we take it game by game. We don’t look down the road; we take it one opponent at a time. And we’re good – I’ll say we’re good – but we want to be great. When we check those three boxes – when we share the ball, we’re selfless and we have effort – we’re great,” Bradshaw said.