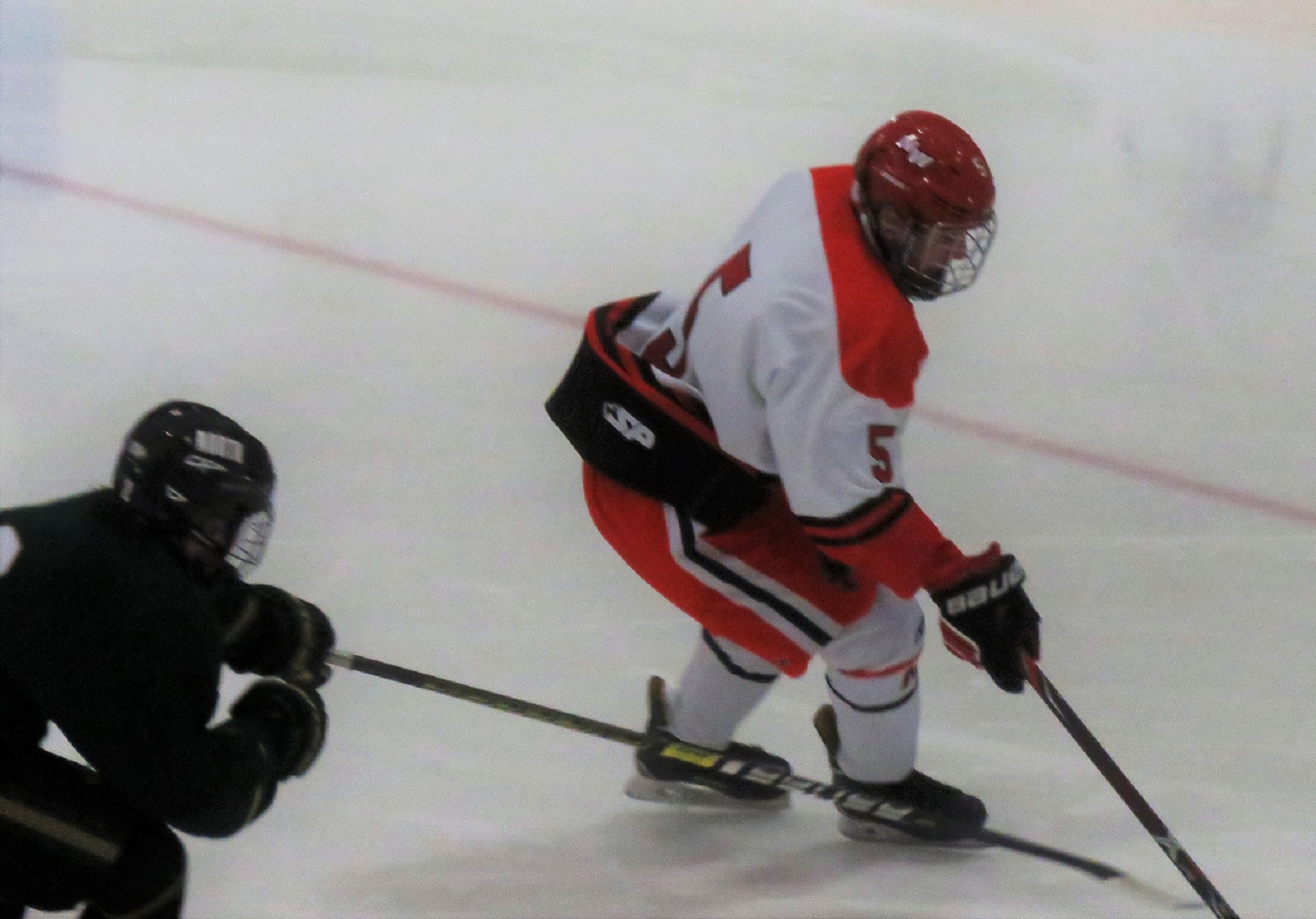 Cam King skates in on net during Saturday night's game versus Williamsville North. King was able to get around the Spartans defender and push the puck past the goalie for his first of two goals on the night. (Photo by David Yarger)

Saturday night, the Niagara-Wheatfield Falcons boys hockey team got revenge on its rival Williamsville North, 3-1. The victory comes just eight days after the Spartans defeated the Falcons, 5-3, at the Northtown Center.

The first period of the game was quite quiet, as each team was able to keep each other off the scoreboard. North did possess a five-on-three for a short moment, but the Falcons were able to kill not just one, but two penalties.

The Spartans’ closest chance came around five minutes to go in the period, as a loose puck wandered in front of the net, but N-W goalie Peyton Siegmann was able to sprawl and make the save.

The Falcons’ came close to the net less than a minute later, as Ben Foster was able to put the puck on net, and Caleb Lee followed with a wrister that was saved by North’s Henry Braun.

A little over three minutes later, King was at it again, as his wrist shot gave the Falcons a 2-0 lead. The goals were King’s fourth and fifth of the season and third in two nights.

North provided some heat with less than eight minutes left in the second, as a loose puck created chaos and a dogpile in the N-W crease, but the puck was sat on by Siegmann.

After the dust settled, N-W was assessed a penalty, but it was the Falcons who put the heat on, as late in the penalty, Lee stole the puck in North’s zone and found Chris Cacciatore who’s backhand couldn’t get above the outstretched pad of Braun.

On another North powerplay, King just missed his hat trick-clinching goal. Shorthanded, King blew by the defense for a clear breakaway, but his shot was high and wide.

The Falcons held the lead at the end of the second period, 2-0.

North struck quickly in the third period, though, as Jeff Cummins’ shot 12 seconds into the frame got by Siegmann to make it 2-1, N-W.

Siegmann would come back big throughout the rest of the period, and, later on, with 16.7 seconds left, Anthony Delisanti added an empty net goal to seal a 3-1 victory for the Falcons.

Following the game, King, who as a defenseman last season scored just two goals, was pleased he had a significant role in the game’s outcome.

“It feels pretty good,” King said. “It’s just getting the puck wide, honestly. It’s just doing everything they (coaches) say – getting it deep and everybody benefits from it, so it’s a good feel.

“It’s the linemates, honestly. Caleb feeds me pucks and Deli and Chris are always feeding pucks and just getting it wide, getting it deep and everybody benefits.”

Niagara-Wheatfield coach Rick Wrazin praised King and his efforts, and he explained how King converted to forward this season.

“He stepped up today. He played great. His speed is just hard for anyone to match,” Wrazin said. “He was a defenseman last year, so he’s a converted forward. … His first goal was just effort and heart and hard work. For other kids to see that, hopefully it grows (on them). So I’m happy for him, but at the same time it sets a great example for everybody else.”

The team was also pleased to avenge its first loss against North. In the first matchup, the Falcons trailed, 5-0, after two periods. In the third period, the team stormed back to score three goals, but eventually took a loss, 5-3.

Wrazin believed the third period of the first matchup set the tone for the team’s rematch with the Spartans.

“I think that game, though, led to us winning this game,” Wrazin said. “We came out in the third that game and showed a lot of character and a lot of heart and we came back and got three of them back. … We were real close to coming back in that one and I think that got our guys to believe. So going into today, I think the fact that they knew they could play with them and beat them was huge.”

Wrazin was also happy with the team’s success on the penalty kill, as the Falcons managed several shorthanded shots on goal.

The win was also nice for Lee, the senior defenseman and captain, as he was unable to play in the team’s first matchup versus the Spartans.

“That was tough (to watch),” Lee said. “Honestly, I think it was good, though, that I didn’t play. They didn’t know what to expect out of our first D pairing. … I got Cam some good looks, he capitalized on one of them. And, all in all, I think that’s a big win for us moving forward.”

After posting a shutout in the team’s 3-0 victory over Frontier Friday night, Siegmann was back between the pipes for his second game in as many nights and he was successful again, making 30 key saves for the Falcons. After a slow start to his season, he said it was nice to get back on track with two quality outings.

“It feels great if I’m being honest. I think the motivator for this game was some kid was talking trash on Twitter and I told him he’s motivated me, he’s not bringing me down at all. I came out there and showed him that everything he said was wrong and I’m back,” Siegmann said.

Wrazin acknowledged Siegmann’s slow start but said the last two games have been impressive and the senior captain needs to continue to lead.

“He’s a guy who’s been struggling and he knows it. … We need him to step up, and I think he puts too much pressure on himself and he’s a kid in the past who has thrived off the pressure. Today, he stepped up. … He really stepped up in the third and played well, especially down the stretch and the last six minutes. So, for him to get on track for us is big,” Wrazin said.

With three-straight wins in the books, Wrazin said the team could be starting to find its groove.

“They definitely are,” Wrazin said. “We talk about getting better everyday and I think we’re seeing it happen. … Hopefully we get better every day.”

The Falcons have a little break for the holiday, but the team’s next matchup is at 5:40 p.m. Sunday, Dec. 30, at Hockey Outlet versus Starpoint.