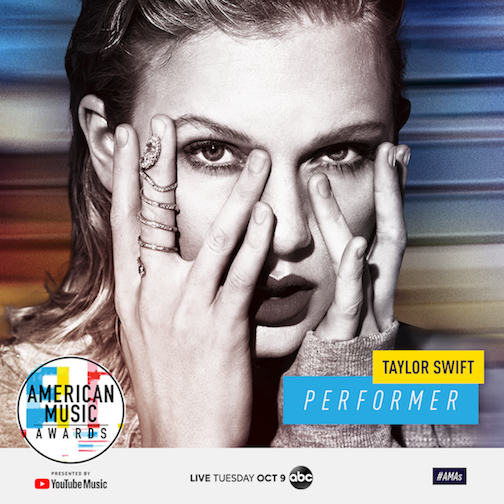 Tue, Oct 2nd 2018 05:30 pm
Swift to perform 'I Did Something Bad' from multi-Platinum album 'reputation'
dick clark productions and ABC announced global superstar Taylor Swift is opening the 2018 American Music Awards with a performance of "I Did Something Bad," marking Swift's first awards show performance in nearly three years.
A 19-time American Music Award winner, Swift has garnered four 2018 nominations and is the current record holder of most wins for Artist of the Year, a category for which she is nominated again this year. Swift joins previously announced performers benny blanco with Halsey and Khalid, Cardi B featuring Bad Bunny and J Balvin, Mariah Carey, Ciara featuring Missy Elliott, Dua Lipa, Panic! At the Disco, Post Malone featuring Ty Dolla $ign, Carrie Underwood and a tribute to the "Queen of Soul," Aretha Franklin.
Hosted by Tracee Ellis Ross, the 2018 American Music Awards, the world's largest fan-voted awards show, will broadcast live from the Microsoft Theater in Los Angeles on Tuesday, Oct. 9 (8 p.m. EDT), on ABC.
Swift is set to take the stage on the heels of her record-breaking "Taylor Swift reputation Stadium Tour" in support of the chart-topping and critically acclaimed album of the same name, which debuted at No. 1 on the Billboard 200, marking her fifth leader on the chart. She is nominated for Artist of the Year, Tour of the Year, Favorite Female Artist - Pop/Rock and Favorite Album - Pop/Rock.
Swift's "reputation," was the biggest selling album of 2017 and No. 1 in more than 110 countries on iTunes' sales charts upon release. With almost 1.3 million albums sold in a seven-day period, Taylor is the only artist in history to have four consecutive albums sell over 1 million copies in their week of release (2010's "Speak Now," 2012's "RED," 2014's "1989" and 2017's "reputation").
Taylor's chart-topping first single, "Look What You Made Me Do," broke multiple records within hours of its release. With over 10 million streams, it was the most-streamed song in a one-day period, the lyric video for "Look What You Made Me Do" broke the standing record with over 19 million views, while the music video shattered the original most-viewed video (28 million) record with 43.2 million views in only 24 hours. Her current single, "Delicate," is already a multiweek No. 1 at both pop and "Hot" AC radio.
The American Music Awards winners are voted entirely by fans. Voting is now open in all categories.
For New Artist of the Year presented by Capital One Savor Card, Favorite Social Artist presented by Xfinity and Collaboration of the Year, fans can vote for each award 100 times per day, per voting platform in one or both of the ways below. Fans can vote for all other awards once per day, per voting platform.
•Via web at VoteAMAs.com.
•Posting a tweet on Twitter that includes the nominee's name or Twitter handle, the category name and #AMAs within the tweet.
Voting for New Artist of the Year presented by Capital One Savor Card and Collaboration of the Year will close at 8:59 p.m. ET Tuesday, Oct. 9, one hour into the live broadcast. Voting for all other categories will close AT 8:59 p.m. Thursday, Oct. 4.
AMA nominees are based on key fan interactions as reflected on Billboard.com, including streaming, album and digital song sales, radio airplay, social activity and touring. These measurements are tracked by Billboard and its data partners, including Nielsen Music and Next Big Sound, and reflect the time period of Sept. 15, 2017, through Aug. 9, 2018.
For more information, visit www.theamas.com, www.dickclark.com or abc.go.com/shows/american-music-awards.
Categories
Entertainment
comments powered by Disqus