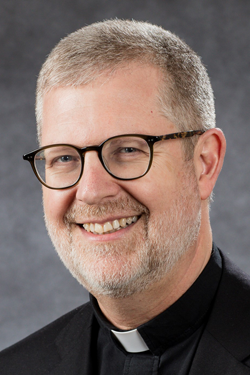 Holtschneider named chair of Niagara University's board of trustees

Wed, Sep 26th 2018 04:45 pm
Frank Fiannaca & Karen Howard appointed to board
The Rev. Dennis Holtschneider, C.M., has been named chairman of the Niagara University board of trustees. Frank Fiannaca and Karen Howard were named trustees.
Holtschneider's role as board chair is not his first experience with Niagara University. He earned his bachelor's degree in mathematics education from Niagara in 1985 and he returned to Monteagle Ridge to serve as executive vice president and chief operating officer from 2000-04.
"As we work together to develop opportunity amidst the challenges we face in higher education, Father Holtschneider's experience in higher education leadership will be an incredible resource for the university," said the Rev. James J. Maher, C.M., president of Niagara University.
In 2004, Holtschneider left NU to become president at DePaul University, serving in that role until 2017. A nationally recognized leader in American higher education, Holtschneider lectures on higher education strategy at Harvard University and has served on the executive committee of the American Council on Education and chaired the board of the Association of Catholic Colleges and Universities, both in Washington, D.C. He currently serves as the executive vice president and chief operations officer for Ascension, the nation's largest nonprofit and Catholic health system.
Holtschneider earned his master of theology and his master of divinity from Mary Immaculate Seminary in Northampton (Pennsylvania), and his Ed.D. in administration, planning and social policy from Harvard University. He first joined NU's board of trustees in 2005 and served two terms. He rejoined the board in 2017.
Fiannaca, Class of 1985, along with his wife, Mary, founded USA Payroll in 1996. The company is a regional payroll service that specializes in payroll accounting for small to mid-size businesses in Philadelphia, Southern New Jersey and Delaware Valley. A native of Rochester, Fiannaca earned his B.S. in computer information science from NU in 1985. As a student at NU, Fiannaca was a four-year student government class representative and a standout member of the Purple Eagles baseball team. In 2016 Fiannaca was inducted into the Niagara University Athletics Hall of Fame. In addition, he has served on the Alumni Association executive board since 2006 and has been the Alumni Association president since 2014.
Howard, '84, has served as the executive vice president of Kei Advisors for the past five years. As a member of the executive management team, she plays a key role in managing all aspects of micro-cap and small-cap publically traded companies' investor relations programs to realize their shareholder value potential. Before joining Kei, Howard served in a number of executive management roles with Columbus McKinnon Corp., including vice president - strategic initiatives, vice president - finance and chief financial officer, and vice president and treasurer, to name just a few. Howard earned her BBA in accounting from NU in 1984. She received the NU department of accounting's Distinguished Alumni Award in 2006.
"Karen Howard and Frank Fiannaca are great additions to our board of trustees," Maher said. "They have been incredibly committed to their alma mater through the years. That commitment combined with their individual leadership and business success will provide Niagara with even greater resources on our board of trustees."
Categories
Business NFP School School feature Top News Features