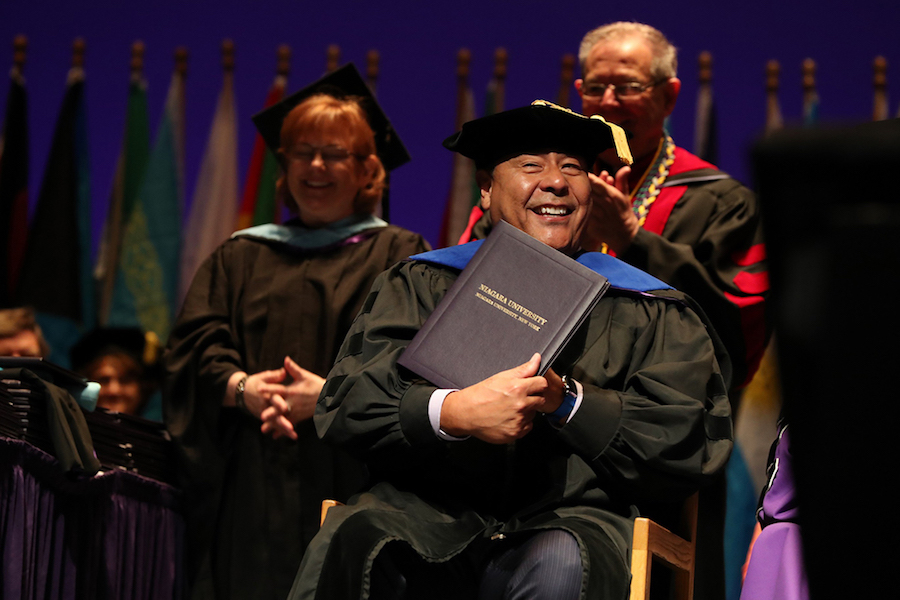 Tue, May 15th 2018 06:35 pm
Niagara University graduated 1,157 new alumni during a trio of commencement exercises held May 10-12.
The celebration got underway Thursday at Artpark with the awarding of advanced degrees to 329 students, in addition to 13 who received doctoral degrees in leadership and policy. Attendees heard remarks from Libby Znaimer, a prominent Canadian journalist and two-time cancer survivor who now serves as the national spokesperson for Pancreatic Cancer Canada. Znaimer, host of the popular "Zoomer Report" on Toronto's New Classical 96.3 FM and The New AM 740, was presented with an honorary Doctor of Humane Letters.
"When I was sick, I came to understand what was important with the clarity I hadn't had before, or probably since - that what was important was my family," Znaimer said. "Now when you hear people, especially public people, talk about the importance of their loved ones, it can sound like a platitude, but it's true that in the end that's what really matters. And it is a gift to realize it before the end and never to lose sight of it."
Also receiving an honorary doctorate was Barbara Layden, a loyal supporter of many charitable causes, including cancer awareness, crime prevention and child abuse. Barbara and her husband, Frank, a former Niagara University basketball coach, have been loyal to NU as well, supporting academic and athletic programs, along with the Elizabeth Ann Clune Center for Theatre.
Two days later, 815 undergraduate students received their degrees during a pair of ceremonies held at Artpark's Mainstage Theater.
John Quiñones, the Emmy-winning anchor of ABC's "What Would You Do?" hidden camera TV series, delivered the morning commencement address to Niagara's College of Business Administration, College of Education and College of Hospitality and Tourism Management. During his 35-year tenure at ABC News, the graduate of St. Mary's University and the Columbia School of Journalism has received numerous awards for his journalistic work on "Primetime Live," "Burning Questions" and "20/20." He received an honorary Doctor of Humane Letters from Niagara.
"After hosting 'What Would You Do?' for 12 years now, I've learned that, despite all the progress we've made in this country with regard to diversity and inclusion, we still have some work to do when it comes to accepting people who are different from us," said Quiñones, who didn't speak any English until first grade. "The fact is words matter, character matters, and that's where you come in. Your generation gives me hope. We're counting on you to fight that bitter hatred and divisiveness. We're counting on you to make this a better nation - a more inclusive, a more compassionate America."
Also honored during the event was Robert L. Bradley Jr., M.S.'97, chief education administrator at Niagara Falls High School, who was granted an honorary Doctor of Pedagogy. Bradley served in various capacities for 25 years at the Niagara Falls Boys & Girls Club, including executive director, prior to commencing a new chapter in his career as an educator with the Niagara Falls City School District.
That afternoon, Dr. Tim Ireland, Niagara's provost, stepped in to address College of Arts and Sciences after the scheduled speaker fell ill. Ireland told the students to use this occasion as an example to expect the unexpected. He also reiterated that the new graduates enter the "real world" with the benefit of having learned from some of the most outstanding, committed faculty members in the world.
"Like you, graduates, I feel truly fortunate to have had the opportunity to interact with and learn from these wonderful teachers and scholars," he said. "Know that Niagara University has properly prepared you for success. Know that your bachelor's degree from Niagara University carries weight in the marketplace and that you will be surrounded by an active, engaged alumni base that is 36,000 strong."
During the same ceremony, Niagara University presented an honorary Doctor of Humane Letters to the Very Rev. Stephen Grozio, C.M., '75, provincial superior of the Eastern Province of the Congregation of the Mission. Included among Grozio's distinguished life of service is migrant ministry in the Diocese of Kalamazoo, Michigan; work as an associate pastor and pastor at St. John the Baptist Parish (Brooklyn); five years as assistant provincial; director of the Hispanic Evangelization Team for the Archdiocese of Philadelphia; provincial treasurer of the Eastern Province; and director of the Hispanic Apostolate of the South Fork of Long Island. He was named provincial in June 2017.
New York Sen. Chuck Schumer also offered remarks to the newest NU alumni on Saturday afternoon, noting that, despite the challenges facing the graduates "at a time of enormous change," they have many reasons to be optimistic.
"First," said New York's senior senator, "you've gotten a great education from one of the finest institutions of higher learning - not just here in Western New York, but throughout our state. Second, you have families and friends who are always there for you, who will always have your back. And, third, you are the first generation to grow up amidst all of this new technology. To you, it's easy, it's simple, it comes natural, and that gives you a big advantage, as well.
"So, you are better equipped to adapt to all these new and sudden changes than any generation ever was. You're better equipped to overcome the obstacles they present. You're better equipped to seize the opportunities they afford, and you're better equipped to pursue your passions, dream big dreams and maybe even achieve them."
To learn more about Niagara University, visit www.niagara.edu.
Categories
Entertainment Entertainment feature NFP Top News Features