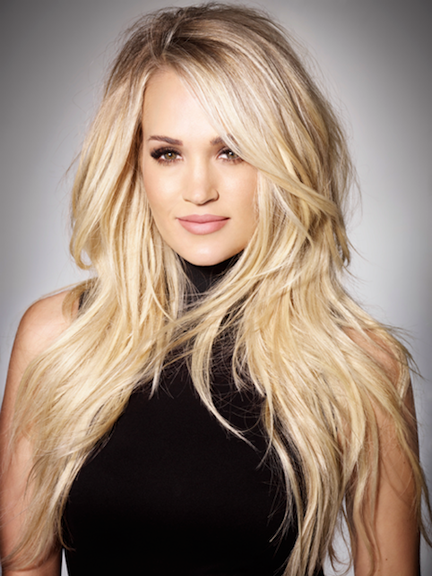 Mon, May 7th 2018 02:55 pm
Carrie Underwood will return to "American Idol" as a superstar guest mentor on Sunday, May 13 (airing live on ABC 8 p.m. Eastern). Her appearance was announced during "Idol's" live show on Sunday, along with a worldwide exclusive look at her new music video for the lead single and title track from her forthcoming album, "Cry Pretty." The full video can now be viewed HERE.
The top five contestants, consisting of Gabby Barrett, Cade Foehner, Caleb Lee Hutchinson, Maddie Poppe and Michael J. Woodard, will perform songs from the Carrie Underwood songbook on Sunday's live show, following a special mentoring session with her during a surprise trip to Nashville (8 p.m., ABC).
Underwood will also perform her hit single, "Cry Pretty," which Underwood co-wrote and co-produced, and debuted in its first week sales at No. 1 in the U.S. all-genres, topping the iTunes top songs charts in 12 countries. The new album - her first for Capitol Records Nashville - will be released on Sept. 14, marking the first time she has co-produced her own album.
Underwood emerged from the promise of her 2005 "American Idol" win to become a true multi-format, multimedia superstar, spanning achievements in music, television and film. A seven-time Grammy Award winner, she has sold over 64 million records worldwide and recorded 26 No. 1 singles, 13 of which she co-wrote, with a catalog of songs that have been streamed more than 2.6 billion times worldwide. She has won 12 American Music Awards, 17 CMT Music Awards, 10 Billboard Music Awards, six CMA Awards, and is the first female artist to be twice named the Academy of Country Music's Entertainer of the Year. She recently took home her 14th career ACM Award for Vocal Event of the Year for "The Fighter," her collaboration with Keith Urban.
In 2013, Underwood starred as Maria von Trapp in NBC's three-hour holiday blockbuster, the Emmy-winning "The Sound of Music Live!" The film's airings attracted 44 million viewers. Her 2015 Platinum studio album, "Storyteller," produced four No. 1 hits. In 2015, she launched and is lead designer for her fitness and lifestyle brand, CALIA by Carrie Underwood, which is exclusively available at Dick's Sporting Goods nationwide and online at www.caliastudio.com.
2017 marked her fifth season as the voice of primetime television's No. 1 program, "Sunday Night Football," and last November she co-hosted the CMA Awards for the tenth consecutive year. This year, Carrie celebrates 10 years as a proud Grand Ole Opry member and she released the hit event anthem she co-wrote, "The Champion" featuring Ludacris, which opened NBC's Super Bowl LII and was incorporated into the network's coverage of the 2018 Olympic Winter Games.
Categories
Entertainment Top Entertainment News