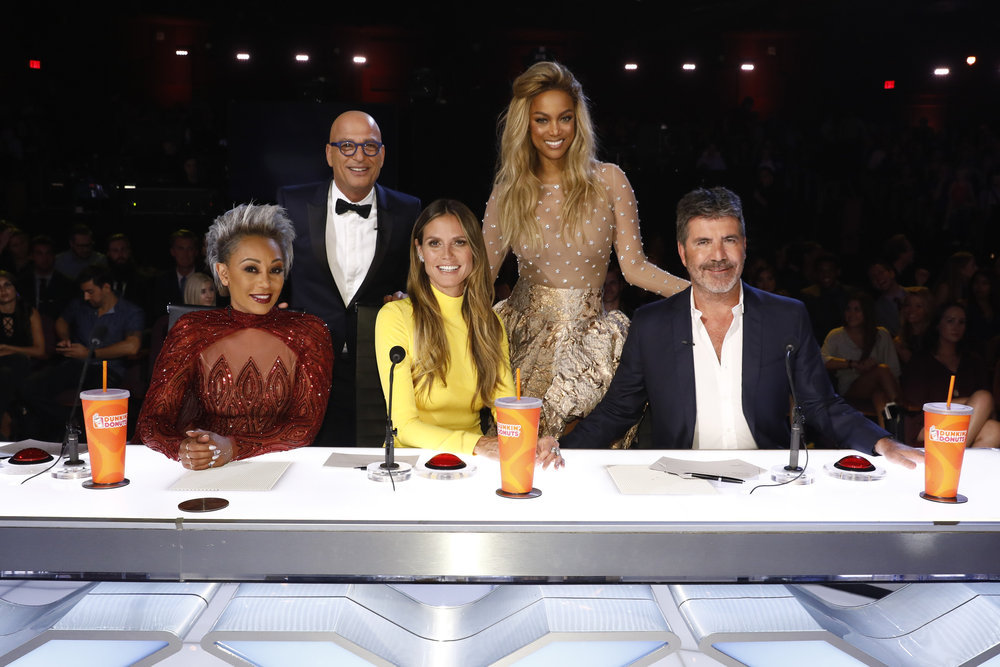 Tue, Mar 6th 2018 03:45 pm
Continuing the momentum of the current season in which NBC is No. 1 in both 18-49 and total viewers, the network has announced the premiere dates for No. 1 summer series "America's Got Talent," freshman success "World of Dance," and the two-time Emmy Award-nominated high-octane competition series "American Ninja Warrior." In addition, adventure series "Running Wild with Bear Grylls" will return for its fourth season.
NBC has won the past seven consecutive summers in the adult 18-49 demo and the last three in a row in total viewers.
'America's Got Talent'
Tuesday, May 29 (8-10 p.m.)
After enjoying its most-watched season ever, "America's Got Talent" returns for season 13 following a thrilling 12th season in which 12-year-old singing ventriloquist Darci Lynne Farmer from Oklahoma City, Oklahoma, took home the grand prize. Judges Simon Cowell, Mel B, Heidi Klum and Howie Mandel, as well as host Tyra Banks, will all be back.
Last summer "America's Got Talent" averaged a 3.5 rating in adults 18-49 and 16 million viewers overall in "live plus seven day" averages for original Tuesday telecasts, according to Nielsen Media Research. That made it "Talent's" most-watched season ever in its 12th year. It was easily the No. 1 summer show in both measures and provided a strong lead-in to the No. 2 show of the summer, NBC's "World of Dance."
'World of Dance'
Tuesday, May 29 (10-11 p.m.)
Coming off its successful first season in which French hip-hop duo Les Twins were crowned champions, last summer's No. 1 new series, "World of Dance," returns for a second season.
"World of Dance" gives dancers the platform to showcase their talents and compete for a life-altering grand prize of $1 million. It's led by a judging team of dance superstars: Jennifer Lopez (who also serves as an executive producer), Derek Hough, NE-YO and host/mentor Jenna Dewan Tatum.
In its first season "World of Dance" averaged a 2.6 rating in 18-49 and 10.1 million viewers overall in "live plus seven day" Nielsens, making it last year's top new summer show in both measures and the No. 2 summer show overall on broadcast television in both categories (behind only "America's Got Talent"). "World of Dance" was also the most-watched new summer alternative series on the broadcast networks in 10 years.
'American Ninja Warrior'
Wednesday, May 30, 8-10 p.m., then moves to Monday, June 18
The two-time Emmy Award-nominated "American Ninja Warrior" returns for its seventh full season on NBC. Hosts Matt Iseman and Akbar Gbajabiamila are back, along with co-host Kristine Leahy.
The action-packed series follows competitors as they tackle a series of challenging obstacle courses in both city qualifying and city finals rounds across the country. Those who successfully complete the finals course in their designated region move on to the national finals round in Las Vegas. There, they face a stunning four-stage course modeled after the famed Mount Midoriyama in Japan. The winner will take home a grand prize of $1 million.
This season the show will make stops in Dallas, Miami, Indianapolis, Philadelphia, Los Angeles and Minneapolis before heading to Las Vegas.
In its sixth season on NBC last summer, "American Ninja Warrior" remained a top draw, delivering a 1.7 rating in adults 18-49 and 6.8 million viewers overall in "live plus seven day" Nielsens to generate top-10 rankings among "Big 4" primetime summer shows in adults 18-49, kids 2-11 and teens 12-17.
'Running Wild with Bear Grylls'
Wednesday, May 30 (10-11 p.m.)
Season four promises to be the most exciting yet, with some of the biggest stars of sports and entertainment joining Bear on "Running Wild."
Celebrities set for a life-altering adventure over the season's eight episodes are legendary tennis champion Roger Federer, Golden Globe Award nominee Joseph Gordon-Levitt, "Game of Thrones" star Lena Headey, two-time Emmy Award winner and "Orange Is the New Black" star Uzo Aduba, Golden Globe winner and "The Americans" star Keri Russell, Oscar nominee Don Cheadle, "The Fate of the Furious" co-star Scott Eastwood and "World of Dance" judge Derek Hough.
"Running Wild with Bear Grylls" delivered a 1.3 rating in adults 18-49 and 4.1 million viewers overall during its last full season over the summer of 2016 and finished undefeated that summer versus regular ABC and CBS timeslot competition in 18-49.
Categories
Entertainment OYT Top Entertainment News