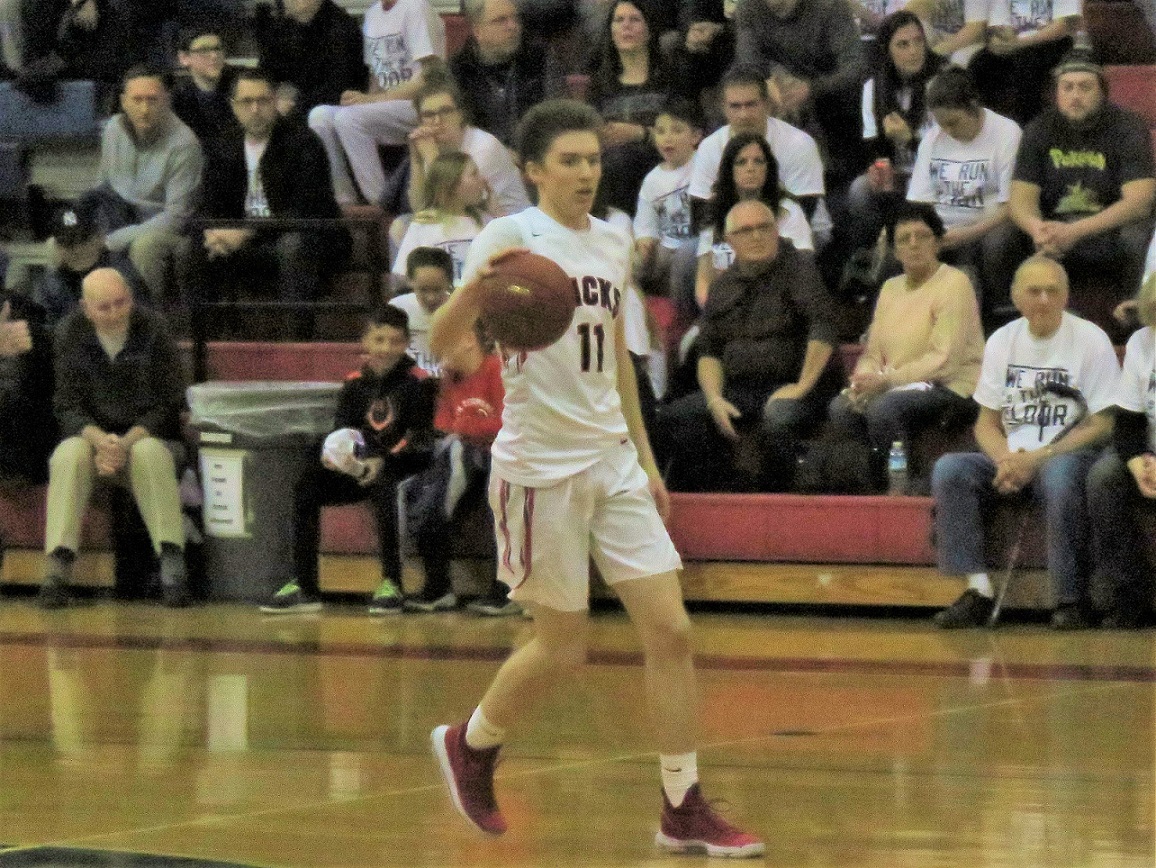 Fri, Feb 23rd 2018 10:00 pm
Senior's 29 points push Lumberjacks to Class A-1 semifinals
By David Yarger
Tribune Editor
Trevor Book has been the anchor of the North Tonawanda Lumberjacks offense all season. Friday night versus West Seneca East he showed how he can take over a game at any time.
The Lumberjacks defeated the Trojans, 59-43, in the Section VI Class A-1 quarterfinals.
The game for Book, who had a game high 29 points, was the last he'd ever play in the Lumberyard at North Tonawanda High School. Book said he enjoyed the night and the moment hadn't sunk in.
"It feels good," Book said. "Honestly, it hasn't hit me yet that it's the last game (here). I'm sure later tonight it will but, some great memories in this gym."
The Jacks controlled the game early, as Book drained the first 7 NT points. Book finished with 9 in the quarter and the Jacks led after one, 16-7.
In the second quarter, the Jacks controlled a 19-11 lead. From there, Book scored 11 more points, as the Jacks went on a 14-5 run to end the half. They led, 33-16 at the break.
In the third quarter, East began to make a comeback.
The Jacks scored the first 4 points of the quarter, then failed to score for the rest of it.
The Trojans took advantage of Book and Dante Moultrie being on the bench for a portion of time and embarked on a 20-0 run to cut the NT lead to one after three quarters. Meanwhile, the Jacks still led after three, 37-36.
North Tonawanda has been keen on playing team basketball and they've moved the ball efficiently throughout the year. In the fourth quarter, that style came back to fruition, and the fourth was much like the first and second quarters.
Book scored the first 5 points of the final quarter, highlighted by a 3-pointer to get the Jacks lead back to 6 points.
With the score 42-38, the Jacks closed the game on a 17-5 run, highlighted by two Sean Ferry 3-pointers and 5 Moultrie points.
The score was not indicative of the game, as the Trojans put up a tough fight versus the reigning Class A champions, but in the end the Jacks walked away the victors, 59-43.
Going into the third quarter only up by 1 point, NT coach Ryan Mountain said he told his team to keep focusing on the task at hand.
"We just always focus on the present," Mountain said. "Nothing really mattered up to that point. Bottomline, it was 1-0 us going into the fourth on our home court and we were very confident with where we've been all season long in close, tough games and I think that definitely helped us ... being in that situation all season long. We really just focused on poise and composure and worried about what we needed to do offensively and defensively in order to succeed."
As the defending Class A champions, the Jacks will get every team's best fight. Mountain said he believes being reigning champs didn't have much to do with the effort from West Seneca East.
"I think it's more of the branding of our program over the last eight to 10 years. They know they're going to get that tough game no matter what, whether were struggling during the season or not.
"I think West Seneca East played like a caged animal, and a caged animal can be dangerous. That's how they played in the third quarter and we knew they were going to, but fortunately we came played the same way in the fourth," Mountain said.
With the win the Jacks return to Buffalo State College to play in the semifinals. Mountain said the accomplishment feels good, especially with this year's team.
"This year it's just as equally rewarding as last year. Whole fresh team; again, we were struggling to score 25 to 30 points in summer league and now here we are, we're heading back. I think we're such a young team, they don't understand how difficult it is to get there and it was a goal to get there and now we have a fresh new goal to get there and succeed and hopefully play for a sectional championship," Mountain said.
Standing in their way is undefeated and No. 1 seed West Seneca West. The Jacks will have to go through all of West Seneca to get back to the Class A-1 finals and Book and Mountain looked forward to going up against one of Western New York's best teams.
"I'm honestly excited to play them," Book said. "They're 21-0 and that means it'd just be that much greater if we could get the win and we play our team basketball."
Mountain said, "From my understanding, they're a trapping and pressing team and we've done an amazing job all year at handling pressure. ... We're a passing team first and again, it goes back to our league that's prepared us. We like our ability to attack their pressure and we feel we can play with anyone in Western New York, because we have one of the best players in Western New York."
For NT, along with his 29 points, Book had 9 rebounds. Moultrie also chipped in 12 points, five rebounds and six assists.
The Jacks battle the Indians in the semifinals at 5:15 p.m. Thursday at Buffalo State College.
Categories
School Tribune
comments powered by Disqus