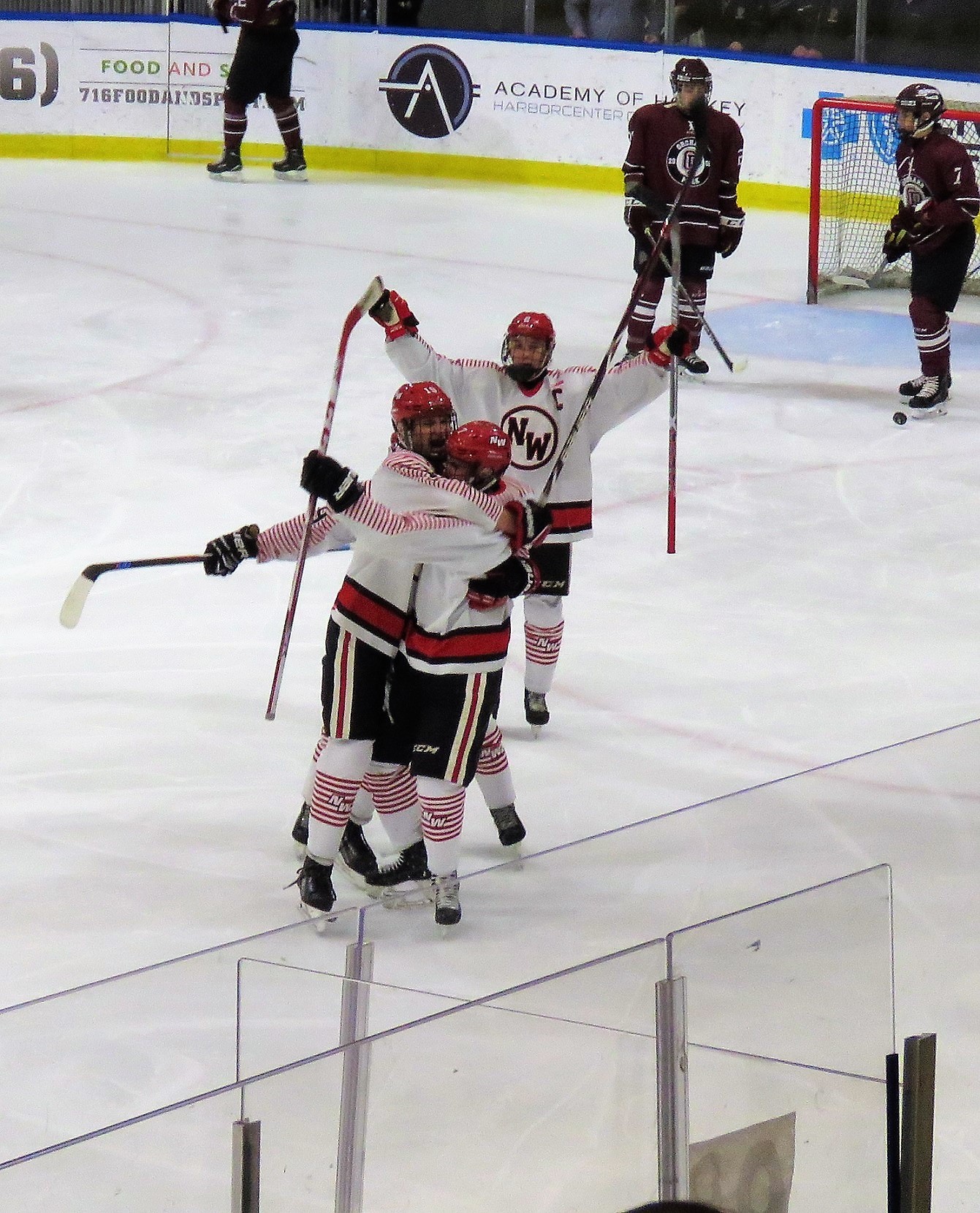 Niagara-Wheatfield teammates surround Chris Tobey and celebrate the team's first goal versus Orchard Park on Tuesday. Tobey's goal was one of three to catapult the Falcons into the Section VI finals. (Photo by David Yarger)

Wed, Feb 21st 2018 12:25 am
Falcons get first win of the year versus Orchard Park in semifinals
By David Yarger
Tribune Editor
On Feb. 29, 2016, coach Rick Wrazin and his Niagara-Wheatfield Falcons hockey team were defeated in the sectional finals, 1-0, versus Williamsville North. Nearly two years later, the Falcons will face the same team in the same game.
To get to the finals, the Falcons defeated the Orchard Park Quakers Tuesday night, 3-0, in the Section VI large schools semifinal.
Wrazin said the feat was something they looked forward to since the beginning of the year.
"It feels good," Wrazin said. "This was part of our goal coming in (to the season). So, it's one step closer and it feels good."
The Falcons set the tone early versus the Quakers. Less than four minutes in on the powerplay, Chris Tobey took a slap shot from just inside the blue line that got past the Orchard Park goalie and gave N-W a quick 1-0 lead.
A little over three minutes later, the Falcons were back on the powerplay. Chace Woods possessed the puck deep into the zone and backhanded it around the net. The shot took a favorable bounce into the net and put the Falcons up 2-0.
The Falcons defense was also on point, as the team held Orchard Park to no shots goal in the first period.
In the second period, Orchard Park came out with a little pressure and got their first shot on goal early.
Woods came close to a second goal, as he traveled the length of the ice only for his backhand shot to be denied at the net.
The Quakers did have a five-on-three opportunity at one point in the period, but the Falcons successfully killed the penalties.
After two periods, the score remained 2-0.
In the third period, the Falcons put the game to bed. After a Dom Pulli penalty, Pulli made up for the mistake and flew out of the box, only to be wide open down the ice. Jake Halleen spotted Pulli and dished a pass to him for a breakaway, which Pulli converted.
In the end, the Falcons won 3-0 and also outshot the Quakers, 33-9.
Niagara-Wheatfield had struggles during the season versus Orchard Park, dropping an overtime game, 4-3, and then tying, 3-3, late in the season. Wrazin didn't spot too many differences from the other two games, but noted his team was upbeat heading into its third clash with the Quakers.
"I don't think it was very different. I think going in we had a lot of confidence going into this one. Even though we lost one and tied one we managed to get 100 shots on them in those two games.
"We figured if we played the right way and went hard to the net, we could put up a couple and shut them down," Wrazin said.
Wrazin added the Falcons looked very similar to the way they played in the third period against the Quakers the second time.
The early goal by Tobey wound up being the game winning goal. Tobey said he didn't expect it to be the winner, but was happy to get the scoring started early for the Falcons.
"As a team, we always talk about how we want to come out and we wanna set the pace ... so obviously, that goal right off the bat on the powerplay, that gives us a huge boost in momentum and right there, that set it for us for the game," Tobey said.
Since 2012, the Falcons have battled Williamsville North four times in the sectional final. Monday will mark the fifth time since 2012, and Wrazin and his team looked forward to the third matchup this season with the Spartans on a bigger stage.
"It's usually a good one when play," Wrazin said. "We know what to expect. They're very offensive, they're very defensive, so it'll be an interesting one."
Woods said, "Obviously it's going to be a good game. I know a bunch of players on their team and they have a lot of skill. ..."
Tobey, who has won a sectional title with the Falcons his freshman year, said, "It's huge. A lot of guys have never been to a sectional (title). I was when I was a freshman against North; we ended up winning. It's a huge rivalry. Everyone is going to be there and it's going to be good. I'm excited for it obviously. Anytime you get a chance to play North and go for the win in a big game it's exciting."
The Falcons championship game versus the Spartans is at 4 p.m. Monday at the KeyBank Center, home of the Buffalo Sabres.
Dom Pulli nets the third and final goal for the Falcons Tuesday night. (Photo by David Yarger)
Categories
School feature Sports feature