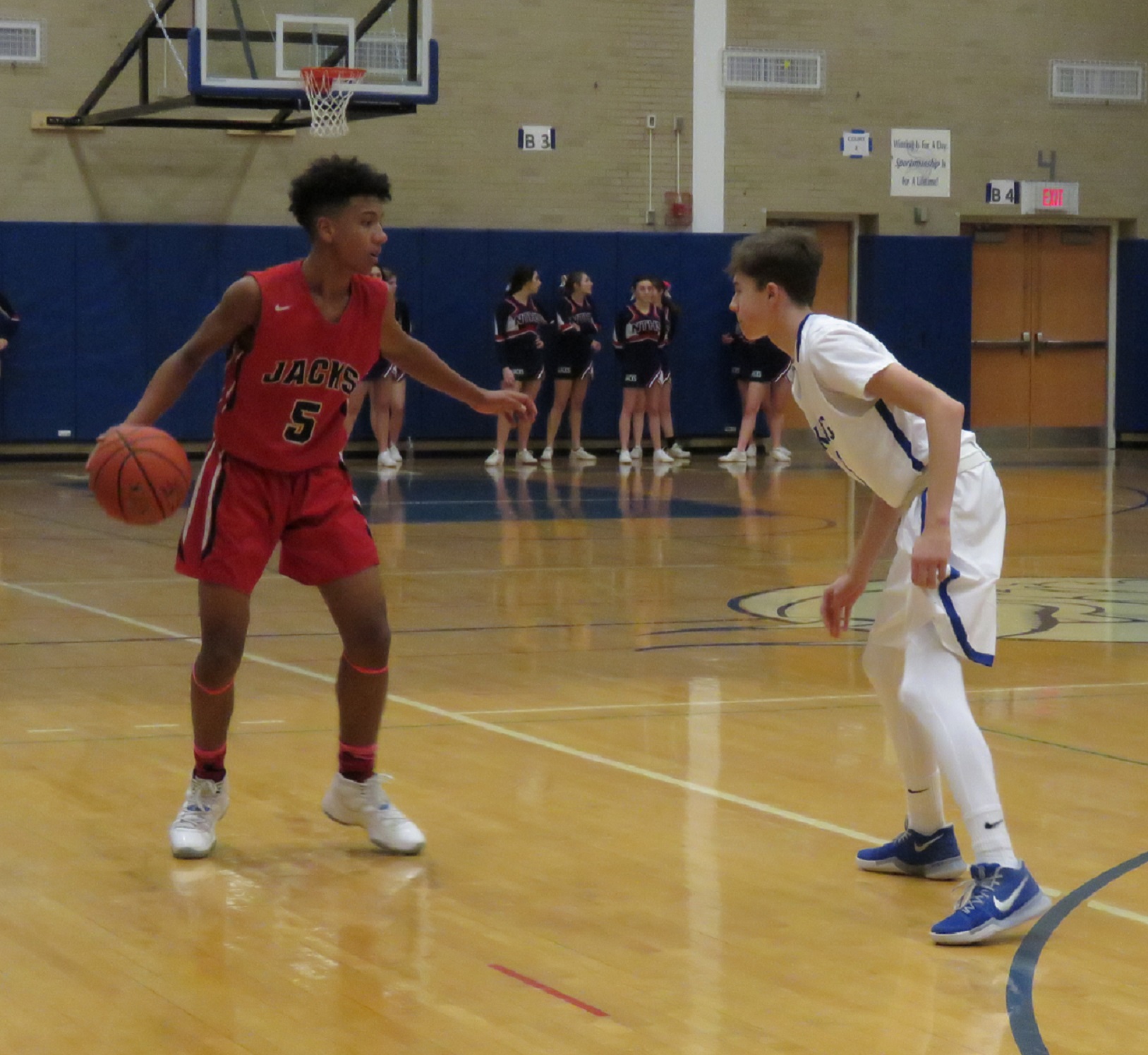 Wed, Feb 14th 2018 10:05 pm
Lumberjacks lead throughout NFL crossover; Vikings make it close late
By David Yarger
Tribune Editor
Wednesday night, the North Tonawanda Lumberjacks faced the Grand Island Vikings in the Niagara Frontier League's third place crossover game. The Lumberjacks got off to a hot start, but the Vikings continued to push their way back, falling just short.
North Tonawanda defeated Grand Island, 59-53, in front of a loud Vikings crowd.
The Jacks never trailed in the game and led as much as 18 in the early going.
In the first quarter, Trevor Book and Dante Moultrie scored 7 and 6 points, respectively, highlighting the Jacks 23-10 lead after one.
In the second quarter, Liam Carey scored the first 6 Vikings points and then Jason Messing scored the next 5, highlighted by a dazzling move to the basket for an and-one, which he converted. After a Cam Sionko 3-pointer, the Vikings trailed at the break, 33-24.
In the third quarter, Sionko came out firing, nailing three consecutive 3-pointers to cut the NT lead to two. After Book made a trey for NT, Derek Callen came down the court and sank another GI trey.
After the 12-5 run to start, though, it was all NT the rest of the quarter.
The Jacks finished the third on a 10-2 run, regaining a 10-point lead after three quarters, 48-38.
In the fourth quarter, the Vikings continued to fight back, but the closest they came was 5 points and the Jacks eventually sealed the game at the free throw line.
For the Vikings, Sionko led with 21 points, including six 3-pointers. Callen and Liam Carey also added 13 and 10 points, respectively.
Being the last regular season game of the year, the Vikings will move on to Section VI Class A1 playoffs. Grand Island is tentatively in ninth place in Class A1, but their next contest will be determined after the Section VI seeding meeting on Saturday. The Vikings finished an even 10-10 during the regular season.
For the Jacks, Book led the way with 24 points, while Sean Ferry chipped in 10 points.
As the Vikings began making multiple comebacks, NT coach Ryan Mountain helped his team weather the storm with quick and to-the-point messages.
"Poise and composure. We expected them to make runs all night long; we knew it was going to be a tough game with a great team to beat on their home floor, in a hostile environment. We just came to the sidelines and just asked 'What's more important? The people in the stands or us?' ... We just needed to focus inside the lines and focus on what we do," Mountain said.
One thing the Jacks will look to do come playoff time is clean up turnovers. Mountain gave credit to Grand Island's defense, though, on a valiant effort.
"Credit Grand Island for causing some of those turnovers. They played hard on their home floor and they're going to make plays. For us, it's just going on to the next play. So, if you turn it over, it turns into instant hustle to get it back and you move on," Mountain said.
Coming off a loss versus CSAT, the Jacks didn't want to go into sectionals with a losing streak on their hands, and Mountain said, going into the postseason on a high note has sparked confidence.
"It feels tremendous, we got our momentum back. ... We're gonna give CSAT the credit, they beat us on their home floor and they're a great team. They're going to do a lot of damage in the sectionals in their class. ... There were a lot of good things in the CSAT game and we just used it to get better for today," Mountain said.
North Tonawanda is tentatively in fourth place in Class A1, which, if everything stays the same, the Jacks would get a first-round bye in the playoffs. The Jacks final record for the regular season was 14-6.
Categories
School School feature Sports Sports feature