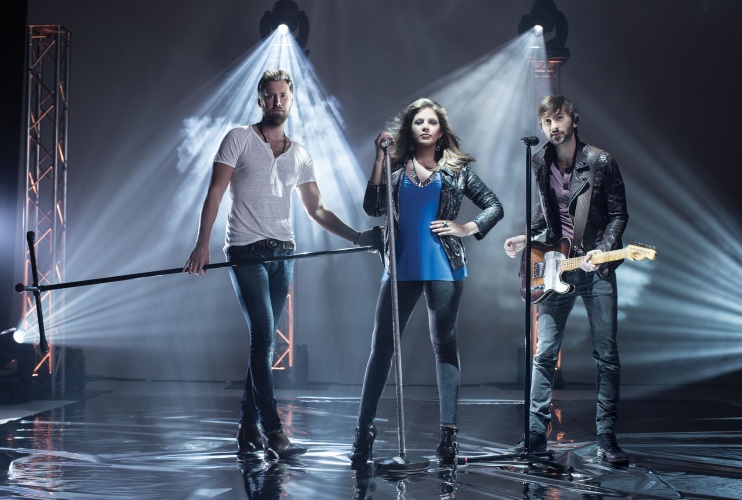 Mon, Jan 22nd 2018 02:10 pm
Seven-time Grammy Award-winning and current nominees Lady Antebellum and three-time Grammy-winner Darius Rucker announced they will head out on the road together for their co-headlining "Summer Plays On Tour," kicking off July 19 in Toronto.
The trio and Rucker share a long-time friendship and touring history, setting the tone for a fun-filled stint across the country and Canada, for which special guest Russell Dickerson has been invited to join. With dozens of No. 1 hits between them, the tour will offer a playlist-worthy night for fans - which will also include spontaneous collaborations throughout the evening.
Fans can purchase tickets beginning Jan. 26 for select cities as part of Live Nation's "Country Megaticket" at www.Megaticket.com. Additional dates will continue to rollout over the coming weeks. Citi is the official credit card of the "Summer Plays On Tour," and Citi cardmembers will have access to presale tickets through Citi Private Pass, Citi's entertainment access program. For complete presale details, visit www.citiprivatepass.com.
"For us as a band, being out on the road together is where it all comes to life," said Charles Kelley. "Darius is one of our closest friends, and so we just feel really excited to get to share this tour and those memories on and off stage with him. There's no doubt that it's going to be a total blast and we're thrilled to have Russell out with us too this summer - we're already brainstorming ways to shake things up and make each night all about just being in the moment."
Currently nominated for "Best Country Album" and "Best Country Duo/Group Performance" at the Grammys, Lady Antebellum recently released the title track from their No. 1-selling album "Heart Break" (Capitol Records Nashville). The new single from the multi-Platinum trio provides "a bedrock for the entire record" (Paste) as "Scott takes satisfaction in feminine independence" (NPR) with "a touch of darkness and a clever play on words" (Rolling Stone).
"Heart Break" follows more than 18 million album units, nine No. 1 hits, ACM and CMA "Vocal Group of the Year" trophies three years in a row and countless other honors, including seven Grammys, Billboard Music Awards, People's Choice Awards and Teen Choice Awards.  For more information, visit www.ladyantebellum.com.
Rucker first attained multi-Platinum status in the music industry as the lead singer and rhythm guitarist of Grammy-winning Hootie & the Blowfish. Since re-introducing himself to the world as a country artist, he has released five consecutive chart-topping albums and earned a whole new legion of fans.
Rucker's Platinum-certified debut country album, "Learn To Live," and follow-up album, "Charleston, SC 1966," produced five No. 1 singles ("Come Back Song," "This," "Alright," "It Won't Be Like This For Long" and "Don't Think I Don't Think About It"). In 2012, he achieved a lifelong dream when he became a member of the Grand Ole Opry, and won his third career Grammy in 2014 for his four-times Platinum-selling cover of Old Crow Medicine Show's "Wagon Wheel," off his "True Believers" album.
"Southern Style," his fourth studio country album, includes No. 1 single "Homegrown Honey," co-written by Rucker, label mate Kelley of Lady Antebellum and Nathan Chapman. His latest album on Capitol Nashville, "When Was The Last Time," features Rucker's eighth No. 1 on country radio, "If I Told You." The album's second single, "For The First Time," is currently Top 25 and climbing the country charts.
Breakout country artist and People Magazine's "One to Watch," Nashville-based Russell Dickerson continues to overtake airwaves and arenas with his Top 5 Gold single "Yours," repeatedly called the "biggest love song of the year," off his debut album by the same name. The "hypnotic" (CMT) crooner kicks off what promises to be his landmark year as Billboard's No.1 emerging artist, a Spotify RISE artist and CMT's 18 for 2018.
With a deep appreciation for and responsibility to his loyal fan following, Dickerson said he understands the importance of real connectivity, spending as much time as he can on the road in front of the people who made him the No. 1 country pre-order for weeks (2017 saw tour billings that included Thomas Rhett's "Home Team" Tour and Florida Georgia Line's "Smooth" tour, and finished with his first headlining tour). His EP premiered at No. 1 on Billboard's Heat Seeker Chart and No. 2 on iTunes country chart, with "Yours" clocking over 100 million streams to date.
The singer and songwriter is the launch artist on Triple Tigers Records, a joint venture with Sony Music. Dickerson's "Blue Tacoma" was also recently featured in the tenth installment of the "X-Men" film franchise, "Logan."
Local concert dates include:
Categories
Entertainment Entertainment feature Entertainment Top Story On Stage feature