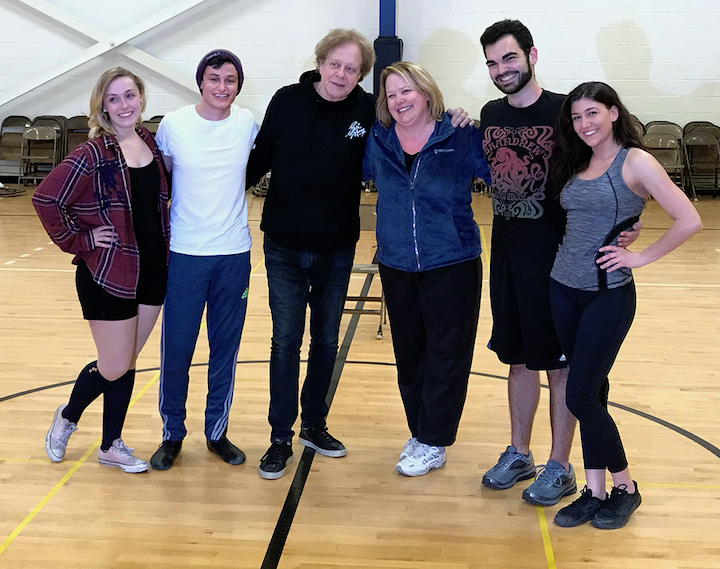 Tue, Jan 16th 2018 03:10 pm
The world premiere of a new musical created by and starring legendary rocker Eddie Money is being choreographed by Niagara University associate professor Terri Filips Vaughan.
Since September, Vaughan has been working with the Grammy-nominated musician on "Two Tickets to Paradise: The Musical," an autobiographical production that features the "Money Man" himself, alongside a cast that includes several Niagara University alumni.
Heather Casseri, Matthew Divita, Shelby Ehrenreich and Peter Raimondo - all 2017 graduates of NU - are among the ensemble cast who dance and sing through Money's life story and rock 'n' roll journey. Another 2017 Niagara alumnus, Matthew Dell'Olio, is assisting Vaughan with choreography and serving as hair and makeup designer.
The show includes Money classics "Two Tickets to Paradise," "Baby Hold On," "I Wanna Go Back" and "Take Me Home Tonight," plus new songs that were written by Money specifically for the musical.
Featuring a full orchestra and the Eddie Money Band, "Two Tickets to Paradise: The Musical" follows Money's career from the late 1960s through the 1980s - an emotional and comical journey from his days training to be a New York City police officer, to reaching legendary global stardom as a singer, songwriter and multi-instrumentalist. Money's blue-collar brand of feel-good rock 'n' roll transcends generations, selling more than 28 million records and landing 23 hits in the Top 100.
"For me, the musical captures that most important time when you're starting out before you get jaded," Money said. He assured "Two Tickets to Paradise" is not a "jukebox musical," but more like the classic Broadway shows he and his sisters used to act out as kids. "It's not just a 'Rock of Ages' and it's not just a rock 'n' roll musical," Money said. "It's a Broadway musical with Broadway-style songs."
Vaughan's involvement in "Two Tickets to Paradise" was rather serendipitous. The wheels were set in motion when Money tabbed one of his good friends, Rochester native John Campbell, to be the show's executive producer. Campbell then reached out to Jim Vollertsen, CEO and board president of the Rochester Association of Performing Arts (RAPA), to begin assembling a production team.
Since Vaughan had choreographed four previous productions for RAPA, she was Vollertsen's first choice. It just so happened Vaughan was on sabbatical this semester from her position as an associate professor of dance at Niagara University.
"It really timed out perfectly, like it was meant to be," Vaughan said.
The Grand Island resident commutes six days each week to Rochester to choreograph her first original production. She called the process "exciting and nerve-wracking," noting that, when she typically starts working on a musical, she researches previous iterations as a springboard to generate dance ideas.
"With this, I'm starting from scratch," she said.
Increasing the stakes is the fact Money scrapped a previous version of "Two Tickets to Paradise" that was adapted by a California-based theater company.
Last Monday, Money arrived in Rochester to meet with the production team. Some changes had been made to the script and the musician was nervous about how they would translate to the stage version of his life's story. Thus, Vaughan invited him to attend that evening's dance rehearsal to help quell his reticence.
At the end of rehearsal, Money told Vollertsen, "I'm going to sleep really well tonight." He then approached Vaughan and said, "You know, I thought I had a really good choreographer out there in California, but you're the real deal."
Tickets are now available for "Two Tickets to Paradise: The Musical," which takes the stage at the Kodak Center in Rochester Feb. 14-18. The show will then be considered for a national tour, which the current cast would receive the first offer to tour in, according to Vaughan, who has taught at NU since 2000.
Tickets and additional information on "Two Tickets to Paradise: The Musical" can be found at www.rapatheatre.org.
To learn more about Niagara University's theater programs, visit www.niagara.edu/theatre or call 716-286-8685.
Categories
Dispatch Dispatch feature Entertainment NFP Sentinel Sentinel HP Feature Picture