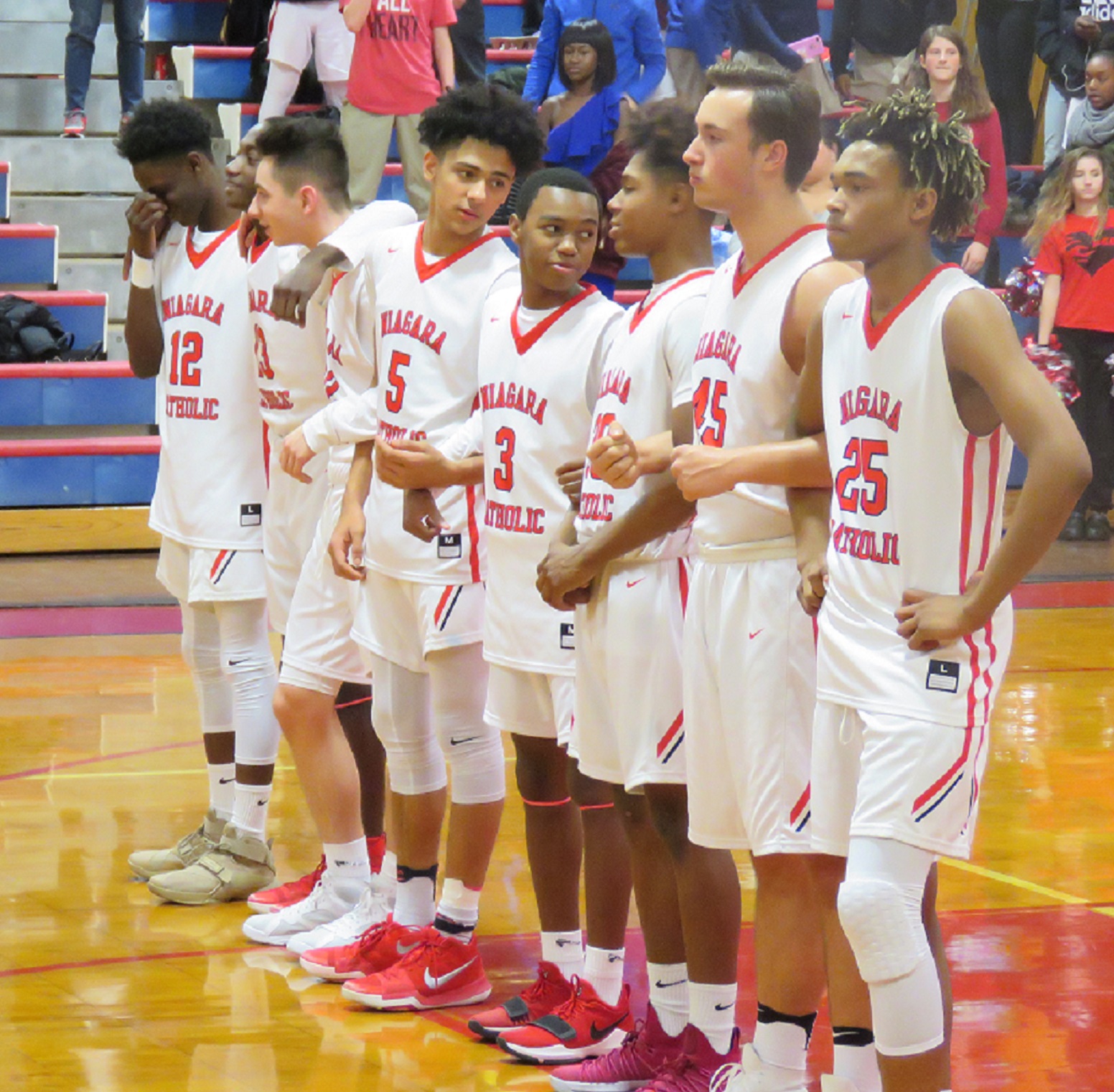 The Niagara Catholic Patriots stand together prior to the national anthem. (Photo by David Yarger)

Wed, Jan 10th 2018 10:10 pm
Patriots use strong second half to roll past the Crusaders
By David Yarger
Tribune Editor
After two quarters of play Wednesday night, some Niagara Catholic fans may have been a little nervous. After two more quarters, the mood definitely settled.
The Niagara Catholic Patriots defeated the Christian Central Academy Crusaders, 89-54, Wednesday night.
The Patriots were led by freshman Jalen Bradberry and sophomore Jaemon "Mookie" Turner, who combined for 49 points.
The game didn't start off easy for the Patriots, as the Crusaders held a 13-8 lead midway through the first quarter. Jared Moser and Josh Tyson scored 15 of the 17 first quarter points for CCA, but found themselves down after one, 20-17.
The Patriots started the second quarter with an 11-4 run, but Dan Tyson made three straight buckets to cut the lead to seven. Turner hit a pair of free throws before the halftime horn and the Patriots went into the locker room leading 38-30.
In the third quarter, Niagara Catholic began to pull away. With the score 40-34, the Patriots embarked on a 20-5 run to close the quarter, highlighted by a sequence of 13 straight points from Bradberry. He had 15 in the quarter. After three, NC led, 63-39.
In the fourth quarter the Patriots continued to extend the lead. NC won the quarter 26-15, and won the game 89-54.
Bradberry finished the game with 30 points on a rare night with no 3-pointers, while Turner finished with 19 points.
The Patriots didn't make a 3-pointer all game, missing all nine attempts, but the starters still racked up 73 points. Haakim Siner had 11, Mehki Starks added 7 and Avion Harris had 6. Off the bench, Roman Wright had 7, Harrison Abramaitys had 5 and Raejaun Smith added 4.
Coach Giulio Colangelo said the team needs that kind of stat every game.
"They gave us a well-balanced attack and moving forward were going to need that to be competitive," he said.
The Patriots may have won by 35, but the team was only up by eight at the break. The team made adjustments at the half to extend their lead, and Colangelo said it had most to do with efficiency.
"I told them they had to come out with more intensity, work the ball around more, and communicate better on defense and they came out strong in the second half," he said.
On Monday night, after the team defeated Nichols, 72-64, Colangelo said he team needed to play better transition defense. Against CCA, Colangelo said it was good, but there's still room for improvement.
"Our defense tonight was better, but we still to get better at it. But, I saw some improvement's tonight, yes," he said.
For the Crusaders, Josh Tyson led the way with 14 points, while Zach Miller added 9.
For the Patriots, they extend their overall record to 9-2 on the year. Their next game is at Monsignor Martin rival Cardinal O'Hara, at 6:30 p.m. on Friday.
Categories
School Sports Sports feature