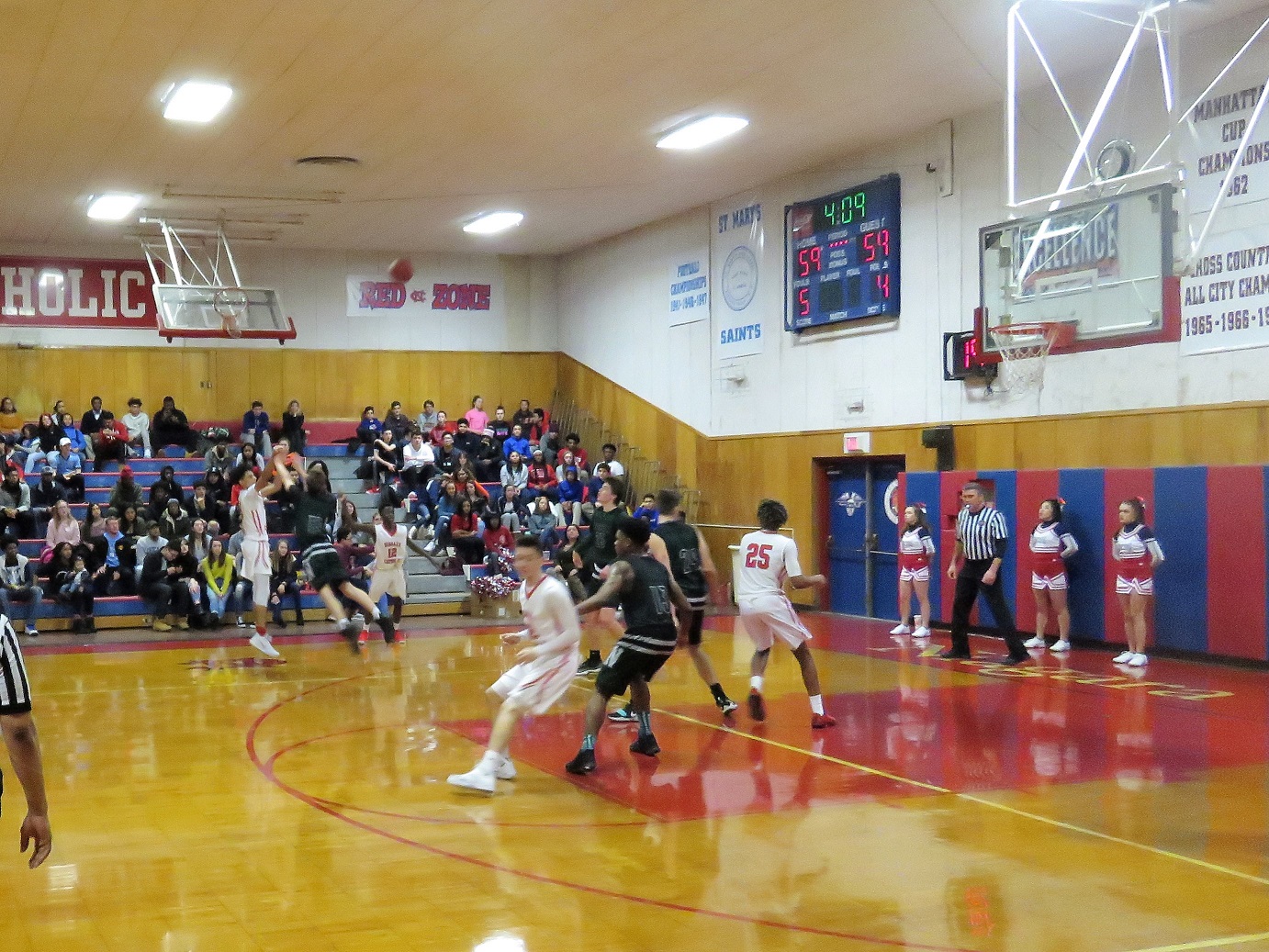 Jalen Bradberry shoots a 3-pointer to give the Patriots the lead for good. (Photo by David Yarger)

Mon, Jan 8th 2018 10:35 pm
Bradberry heats up for Patriots in fourth quarter, puts game on ice
By David Yarger
Tribune Editor
The Niagara Catholic basketball team is a team that, when they play a fast pace they're tough to beat. When teams can slow them down, they have a tough time on offense. Both paces were seen on Monday night.
The Patriots defeated the Nichols Vikings Monday night, 72-64, in Monsignor Martin league play.
Niagara Catholic, who came into the game ranked No. 20 in Class B in New York state by the New York State Sportswriters Association, had their hands full throughout the course of the game, as the hot shooting of Nichols kept the Vikings in the game.
After a quick 6-0 start by the Patriots, the Vikings cut it to 8-5 in first. That's when Aidan Horan drilled his first 3-pointer of the game to tie it at 8-8. Horan would drill another 3-pointer and a layup, leading all scorers after one quarter, with 8 points. Nichols also held a 18-16 lead after one.
In the second quarter, the Patriots came out a bit stronger on offense, winning the quarter 19-13, and leading at halftime, 35-31.
The third quarter was a period of runs by both teams. With the score tied at 38, Haakim Siner made a layup to start a Patriot 14-4 run. Down by 10, Nichols called a timeout to regroup. After the timeout, the Vikings embarked on a 11-2 runs to end the quarter, and cut the Patriots lead to one, 54-53. Chris Stineman fueled the Vikings' offense, scoring 13 in the quarter.
In the fourth quarter, after a Stineman 3-pointer to give the Vikings a 59-56 lead, freshman Jalen Bradberry took over for the Patriots.
Bradberry scored 13 of the Patriots 18 points in the quarter, including three 3-points, one to tie the game and another to give the Patriots the lead for good.
Niagara Catholic held the Vikings to 11 points in the fourth quarter and survived to win, 72-64.
Bradberry, who finished with 24 points, struggled with his jump shot at the beginning of the game, but coach Giulio Colangelo said it all mattered in the end, because "He heated up and made some big buckets for us down the stretch."
Colangelo also said his team is slowly making progress to finish games strong, and not get down of themselves when a lead vanishes, which he said the team did a good job of Monday night.
Colangelo did note some things the Patriots have to work on, mostly on the defensive side of things.
"I thought defensively we kind of lost sight of our guys after they'd pass the ball a few times; we have to work on that. We have to work on transition defense and our defense in the half court set," Colangelo said.
For Nichols, Stineman led with 22 points, while Horan and Antonio Jones each chipped in 15 points. TJ Banaszak also wound up in double figures with 10 points.
For Niagara Catholic, along with Bradberry's 24 points, Mehki Stakes and Jaemon Turner chipped in 13 points apiece, while Siner had a double-double with 12 points and 13 rebounds. With the win, the Patriots advance their record to 8-2.
The Patriots next game is at 7:30 p.m., Wednesday at home versus CCA.
Categories
School Sports