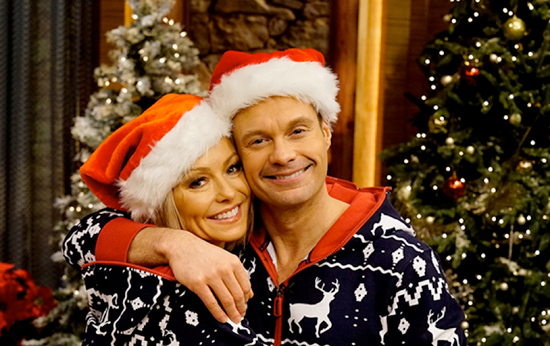 Wed, Dec 13th 2017 01:05 pm
Hugh Jackman, Kate Winslet & Margot Robbie among A-listers stopping by
'Countdown to Christmas' is on with special themed shows, including 'Live's Holiday Sweater Party' and 'Kelly and Ryan's Christmas Party'
The weeks leading up to the holidays will be filled with fun and festive celebrations on "Live with Kelly and Ryan," as Kelly Ripa and Ryan Seacrest usher in the season in style. This year, "Live" presents not just two but three special holiday episodes. In addition to "Live's" annual Christmas and end-of-year shows, Ripa and Seacrest will also host a holiday sweater spectacular.
Through the rest of December, the hosts will welcome some of the biggest names in entertainment, including Hugh Jackman, Kate Winslet, Margot Robbie, Kate McKinnon, Jessica Chastain, Christoph Waltz and Seth MacFarlane. They'll also chat with Laura Dern about the highly anticipated film "Star Wars: The Last Jedi."
Everyone loves a festive holiday sweater, and the Dec. 21 edition of "Live" will be devoted to that iconic piece of holiday wardrobe with "Live's Holiday Sweater Party." The hosts, guests Kate Winslet and Jonathan Groff, and the "Live" audience will all be decked out in their wintry best; and audience members will also be featured in a crazy and colorful holiday sweater fashion show. Plus, the world-famous Radio City Rockettes will perform a number for the studio audience.
A "Live" tradition continues with "Kelly and Ryan's Christmas Party," the show's annual holiday episode, on Dec. 22. This year, actor Jackman sits down with the hosts to talk about his new film, "The Greatest Showman." Country star Brett Eldredge will perform; and the man of the hour, Santa Claus himself, will make his annual visit to the "Live" studio. In addition, "Live" will feature holiday messages from favorite celebrities, including Oprah Winfrey, Will Ferrell, Kelly Clarkson and Jimmy Kimmel.
Ripa and Seacrest will wrap up the season with "Live's Viewers' Choice Show" on Dec. 27, recapping top "Live" moments as voted on by the viewers, from hilarious host chat moments to epic celebrity walkouts to star-studded interviews and much, much more.
"Live with Kelly and Ryan" airs at 9 a.m. weekdays on ABC's WKBW-TV Channel 7. Visit "Live" on the web at www.KellyandRyan.com, on Facebook and Instagram (@LiveKellyandRyan), and Twitter and Snapchat (@LiveKellyRyan).
Categories
Entertainment Top Entertainment News