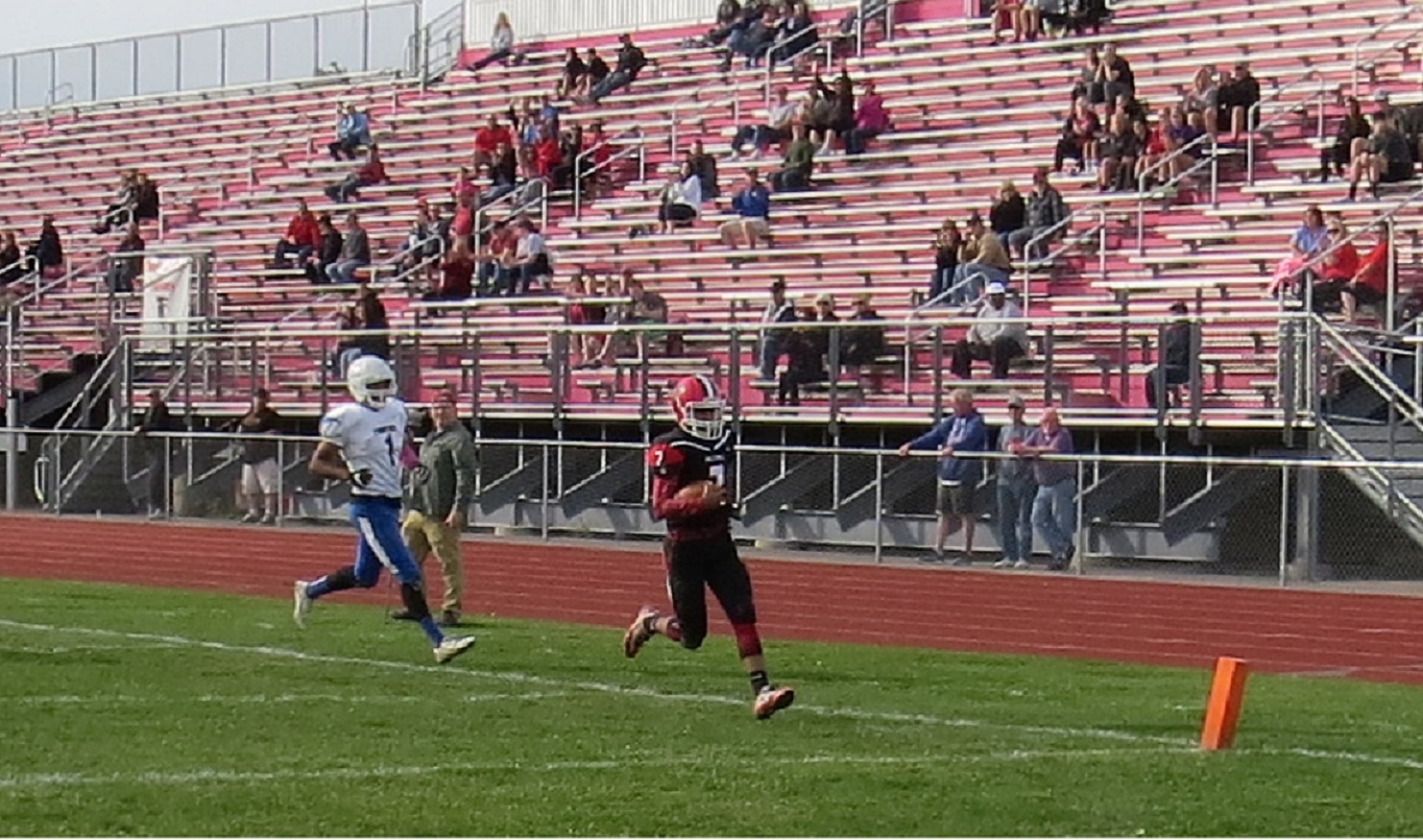 Jordan Parks rushes in for his third touchdown of the game. Parks finished with five combined touchdowns. (Photo by David Yarger)

Sat, Oct 21st 2017 02:10 pm
Junior quarterback racks up combined five touchdowns
By David Yarger
Tribune Editor
The Niagara-Wheatfield Falcons might not be in the playoffs this year as they'd hoped, but they were in action on Saturday, in an extra regular season matchup versus Frontier High School. The Falcons came out on top, 41-26, in the last home game of 2017.
Quarterback Jordan Parks shined in the victory, rushing for 147 yards and four touchdowns. Parks also threw a 38-yard touchdown pass to Zion Paige. The 147 rushing yards puts Parks just 33 yards away from 1,000 for the season.
Parks got the offense rolling early with a 16-yard scramble for a touchdown, giving the Falcons an early 7-0 lead.
On the Falcons' first defensive possession Josh Brown made a huge hit on the Frontier running back, causing a fumble that was recovered by Bailey Braunscheidel.
One play after the turnover, the Falcons offense turned the fumble into points, as Parks launched a deep ball to Paige who came back and caught it and ran it in. Wheatfield led quickly, 14-0.
Frontier came back with a score of their own and then recovered an onside kick, giving their offense a chance to tie the score. Two plays into the drive, Nick Stott intercepted the Frontier pass and took it into Frontier territory.
One play after the interception, Parks ran 25 yards for his second rushing touchdown of the day, putting N-W up, 20-7.
As the second quarter started, the Falcons got the ball back after a three-and-out by Frontier. After two plays with no gain, Parks took off again, bolting 40 yards for his third rushing touchdown of the day. This put the Falcons up by 21 over Frontier, 27-6.
After a Frontier turnover-on-downs, the Falcons looked poised to score again, getting it to the 5-yard-line. On fourth and goal, the team opted to kick a field goal and the kick was blocked. Two plays after the block, Frontier's Brennen Kilcoyne threw to Cameron Danner for an 82-yard touchdown, cutting the Wheatfield lead to 27-14.
The Falcons got one more offensive possession in the half, and they made the most of it. With one second on the clock and the ball at the 3-yard-line, Parks took the snap looking to throw, then turned the corner and dove for the end zone with success. His fourth rushing touchdown of the day sent the Falcons into halftime leading, 33-14.
Out of the locker room at halftime, Frontier came out fighting, as Max Fleming punched it into the end zone from five yards out, cutting the N-W lead to 33-20.
The Falcons offense reached the 3-yard-line before turning it over on downs and giving it back to the Frontier offense.
Frontier embarked on a long, 97-yard drive, finished by a Fleming touchdown again, to creep closer, 33-26.
Seven points is as close as Frontier would come. On the Falcons first offensive play after the score, Nick Stott took a pitch from Parks and rushed 60 yards to the end zone, successfully putting the game on ice.
After an interception by the Falcons' Chris Gordon on the ensuing possession, N-W went into victory formation, taking a knee to solidify the win, 41-26.
Coach Russ Nixon was happy for his group and the seniors that got to walk off Terry Harvey field as winners.
"I told them to soak it in and enjoy this. They're gonna walk off this field winners. We were 3-1 at home this year, so it's always nice when you can defend the home turf like that," Nixon said.
As Frontier crept back into the game, the big offensive start was huge in the outcome of the game. Nixon said it was a tough battle and the big start was vital to the team's success.
"It was a game into the fourth quarter," he said. "We knew they were gonna have to get the ball back quick, so those early points definitely were important at the end of the game."
As the season nears a close, the Falcons still have one game left next week. Wheatfield will travel to Kenmore West to battle with the Blue Devils. Nixon said, he wants his team to finish strong and show their worth.
"We talked about this week and next week being an opportunity for us to show we belong. We missed out on our season goal, but I think we showed today that we have a good enough offense and when our defense is playing and firing on all cylinders, we can be there too," he said. "Next week were gonna have a tough game against another tough opponent, but it'll be a good opportunity for us to go out there and get after another win."
The Falcons last regular season matchup is at noon on Saturday.
Categories
School School feature Sports Sports feature