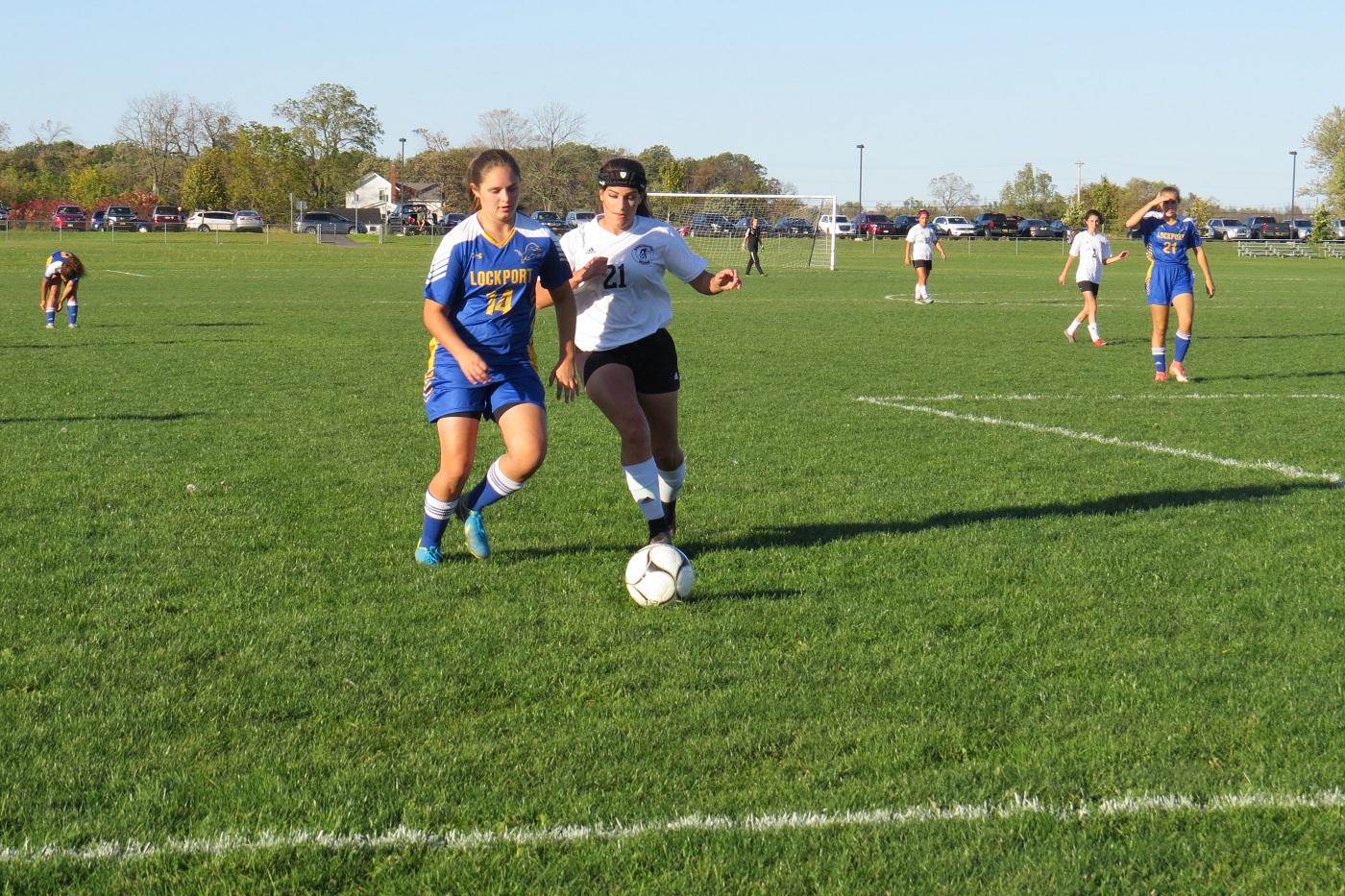 Michelle Terbot of Niagara-Wheatfield battles Rebecca Schrader of Lockport for possession of the ball.

Fri, Oct 20th 2017 06:35 pm
Big win pushes Falcons to sectional semi-finals
By David Yarger
Tribune Editor
After coming a tough loss for a league championship, any team could've hung their head and lost confidence. Niagara-Wheatfield girls soccer did the complete opposite on Friday evening. The No. 2 seeded Falcons defeated the No. 7 seed Lockport Lions, 4-1, in the Section VI Class AA quarterfinals.
Coach Pete Cerny said his team refused to get down on themselves after a tough loss to Grand Island in the Niagara Frontier League title game. The rebound was seen Friday.
"They don't spend much time feeling sorry for themselves, or thinking about the last game," Cerny said. "They really do look forward to the next game and all they're really trying to do is just get better. They focus less on winning and work on getting better and playing the best that they can play."
N-W carried momentum the entire game, as the team saw numerous shots on goal throughout. The Falcons got on the board in the 22nd minute, as Erin Weir netted her 17th goal of the year to get the ball rolling for the team. Less than 30 seconds later, Samantha Maghrak found the back of the net for a goal, giving the Falcons a rapid 2-0 lead. The score remained 2-0 into halftime.
The Falcons would add to their lead after Briana Zayatz scored in the 19th minute of the second half. A few minutes later, Maghrak scored her second goal of the day, putting N-W up 4-0.
Lockport added a late goal with less than 10 seconds left and the final score was 4-1.
In a win-or-go-home circumstance, Cerny was pleased with his team's performance and expects much of the same in their semi-finals matchup.
"We're going to play the same soccer, it's going to be a battle every second. Individual battles make up the big one. So, I'm not gonna change anything that we're doing or tell them anything differently, it's the same game," he said.
The Falcons' semi-final matchup will be versus the No. 3 seed, Williamsville North Spartans, who defeated No. 6 Lancaster. Cerny said his team will be ready for battle.
"I know that they're a good team. It was a close game last year (versus Will. North) and I think it'll be a close game this year," he said. "I expect them to play hard and if we play our best soccer then we should be good."
The Falcons' matchup versus the Spartans is at 5:30 p.m. at Williamsville South High School.
Categories
School School feature Sports Sports feature