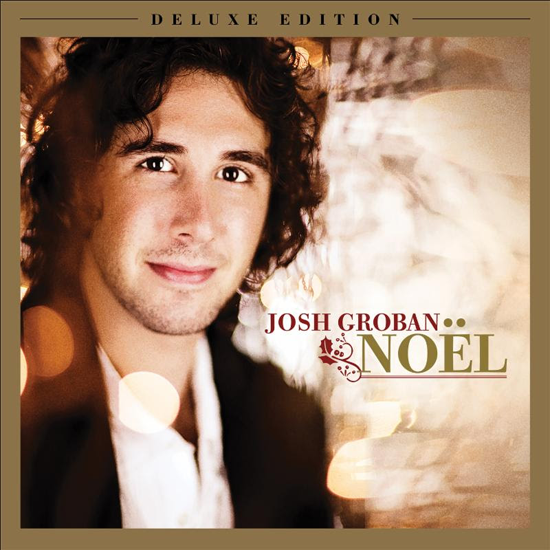 Fri, Oct 13th 2017 06:10 pm
Album available Nov. 3; pre-order album HERE
Multiplatinum, international recording artist and songwriter Josh Groban will release a deluxe version of his beloved Christmas album "Noël" on CD and all digital formats on Nov. 3 via Reprise Records. The album can be pre-ordered HERE.
Originally released on Oct. 9, 2007, this Grammy-nominated holiday recording remains one of the best-selling Christmas albums of all time, selling over 7.5 million copies worldwide. The new album will consist of the original 13 tracks with an extra six new songs, including four brand-new, never-before-released recordings:
•"White Christmas," a recording with a full, 70-piece orchestra recorded in Abbey Road, London.
•"Christmas Time Is Here," a duet with the legendary Tony Bennett. This famous, cross-generational song from "A Charlie Brown Christmas" will surely be a hit at family Christmas parties.
•"Have Yourself A Merry Little Christmas." Following Groban's platinum album "Stages," he wanted a holiday song that matched the theme of "Stages" and found that in this famous Christmas song from the show/film "Meet Me In St. Louis."
•"Happy XMas (War is Over)," is a take on the poignant, classic Christmas song written by John Lennon and Yoko Ono. Fans who pre-order the new album will receive this song as an instant grat track).
•"Believe," the Academy Award-nominated song from the "Polar Express" film soundtrack, which was never before available on a Groban release.
•"O Holy Night," a song from the 2002 CD/DVD that was never before released digitally.
This year, Groban concluded his Broadway run in "one of the best musicals of the decade" (Time Out New York), "Natasha, Pierre & The Great Comet of 1812." To commemorate his time on Broadway, Groban will release a 192-page, limited-edition hardcover coffee-table book, "Stage to Stage: My Journey To Broadway," published by Chronicle Books/TourDForce, on Nov. 21. The book captures his perspective on the notable events that illuminated his journey to Broadway, featuring behind-the-scenes looks at the past two years of Groban's career.
The book is available for pre-order HERE.
Categories
Entertainment Entertainment feature
comments powered by Disqus