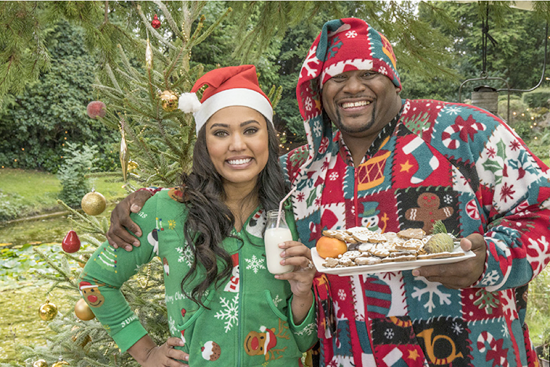 An all-new 'The Great American Baking Show' debuts this December

Fri, Sep 22nd 2017 07:00 am
Ayesha Curry & Anthony 'Spice' Adams to host 3rd season
It's back! "The Great American Baking Show," based on the U.K. sensation "The Great British Bake Off," returns for a third season on ABC this December.
Hosted by New York Times best-selling cookbook author and television personality Ayesha Curry, and former NFL star and media personality Anthony "Spice" Adams, this duo brings "The Great American Baking Show" a delicious new dash of holiday-themed recipes and competition this December.
"The Great American Baking Show" showcases some of the nation's best bakers as they compete in a series of themed challenges and eliminations all hoping to be crowned "America's Best Amateur Baker."
Curry is a New York Times best-selling cookbook author and host of "Ayesha's Home Kitchen" on Food Network. She recently launched her meal kit company, Homemade, and her much-anticipated eponymous line of cookware will be available at retail nationwide next month. Her restaurant International Smoke, in partnership with Michelin-starred chef Michael Mina, has locations in Waikiki, Los Angeles and San Francisco. She was also just announced as the newest face of CoverGirl. She lives in the Bay Area with her two daughters, Riley and Ryan, and her husband, Stephen Curry.
Adams is a retired professional football player and media personality. After graduating from Penn State University, he was selected in the 2003 NFL Draft by the San Francisco 49ers. After four seasons with the 49ers, he signed as a free agent with the Chicago Bears where he played until his retirement in 2012. In 2010, while playing for the Bears, Adams was awarded both the Ed Block Courage Award and the Brian Piccolo Award demonstrating his work as a role model of inspiration, courage and loyalty within the community and on his team. Since his retirement, he has kept busy serving as a football analyst and television host for shows on the Big Ten and Chicago Bears networks, along with racking up tens of millions of views with his social media videos in which he has displayed the comedic and charismatic personality for which he has become known. Adams currently resides in Chicago's northern suburbs wife his wife, Andenika, and four children.
Categories
Entertainment Entertainment Top Story OYT Second Helping