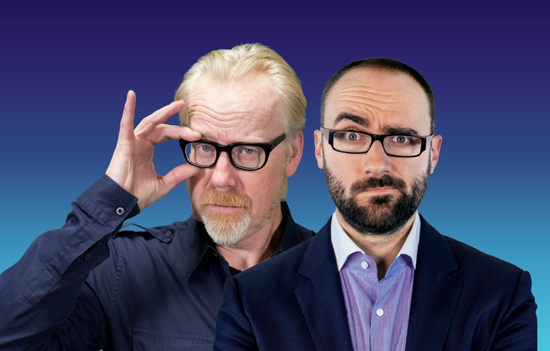 Mon, Aug 7th 2017 01:00 pm
Tickets on sale Friday
The University at Buffalo Center for the Arts presents "Brain Candy Live!" starring Adam Savage and Michael Stevens at 7:30 p.m. Wednesday, Nov. 22. Tickets go on sale at noon Friday, Aug. 11. A limited number of VIP tickets (premium seating and meet-and-greet) are available for $129.
Savage, editor-in-chief of Tested.com and former co-host of the Emmy-nominated Discovery series "MythBusters," and Stevens, creator of award-winning YouTube Channel "Vsauce," have joined forces to bring this one-of-a-kind, interactive, hands-on, minds-on theatrical experience to cities across the U.S. They're master explainers, bringing along their crazy toys, incredible tools and mind-blowing demonstrations for a celebration of curiosity that literally has audiences shouting "more" after their favorites.
Audiences are engaged - and enthusiastic test subjects and participants - as they spend two hours laughing, learning and exploring during a theatrical experience like no other.
Every night, Savage and Stevens literally can't wait to unleash their collective sense of wonder, curiosity and fun for each new audience. They're inviting everyone to join-in and get their minds messy as their demonstrations leap off the stage.
Tickets will be available at the UB Center for the Arts box office (open from noon-6 p.m. Aug. 11) and online at www.ticketfly.com. For more information, call 716-645-2787 or visit www.ubcfa.org or www.braincandylive.com.
About Adam Savage
One of the most highly regarded and watched series on Discovery Channel, "MythBusters" ran for 14 years. Co-executive produced and co-hosted by Savage, the show mixed scientific method with problem-solving gleeful curiosity and plain old-fashioned ingenuity to confirm (or bust) myths and popular misconceptions, while it created a signature style of explosive experimentation. Today, in addition to creating content for his website, Tested.com, Savage has become a proponent for making, working with the White House to encourage kids and adults alike to get their hands dirty. He's also a regular at conventions across the country, where his elaborate and handmade costumes (such as Totoro at New York Comic Con) attract much attention ... and hugs.
About Michael Stevens
Michaels' passion for learning, science and making curiosity contagious led him to create Vsauce in 2010. The YouTube channel captures attention with fun questions such as, "What color is a mirror?" "Can you count past infinity?" and "Why are things creepy?" Now reaching a collective 17 million subscribers with video views in excess of 2 billion, Vsauce has grown into one of the largest educational networks on the web. Last year, it received the Webby for Best Science and Education Network.
Categories
Entertainment Entertainment feature Entertainment Top Story NFP On Stage feature Top Entertainment News